As mentioned earlier, due to the fact that the smaller frame factor forced the removal of the top screen, all relative shooting info is relocated to the LED screen. This method has it’s downsides, but equally amount of upsides. First, it’s great for night-shooting, because it’s lit up, unlike the top screen would be.

Second, it displays all information in a clear and concise format… it leaves no room for confusion. Along the top, you will first see what mode is selected, in the case of the picture, it’s Auto. To the right of that logo are a few indicators, for flash control, auto-ISO, image optimization, beep and also the battery level. 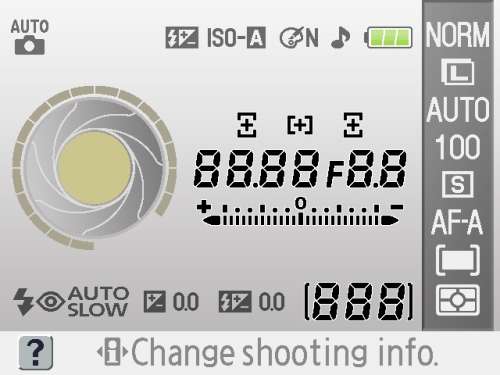 To the left you might be wondering what the circle represents. If you guessed aperture, you’d be correct. The higher your f-stop, the smaller the inner circle will be, and vice versa. The outer circle represents the shutter-speed. The more bars filled up, the faster the speed. Directly to the right of this are the focus-area indicators, followed by the ISO and f-stop indicator. An analog exposure delay indicator bar is found below these numbers.

Lining up the bottom are a few more indicators, such as flash sync mode and exposure compensation, with a three digit number following, which represents how many exposures you have left. If over 1,000, it will be represented as x.xK. Finally, the right horizontal bar shows your basic shooting info: Image Quality, Image Size, White Balance Mode, ISO, Shooting Type, Focusing Mode, AF mode and metering mode.

Overall, I enjoy the intuitive menu system Nikon offers here, but it’s hard to to deal with if you are already familiar with the screen found atop other Nikon D-SLRs. For beginners, it’s superb. Information is laid out in an easy-to-read manner and is easy on the eyes as well. For advanced and pro shooters though, you are likely to find the overall experience a very clunky.

When the D40 was released late last year, I initially believed that it would be the perfect camera for a starter or someone with smaller hands. Both accounts can be true. If you have huge paws, the camera is not going to be comfortable to use. I have averaged-sized hands, and I can’t say I entirely enjoy using this camera for an extended period of time. I personally feel that the larger D-SLRs fit my hands better and as a result, are far more comfortable to use.

For whatever reason also, I find that while I am squinting through the viewfinder to snap a picture, my nose gets in the way moreso with this camera than others. I believe this in part to be due to the cameras smaller frame and also the slightly different view-finder.

Those gripes aside, I had a few family members test out the camera and give me their honest opinions. All of them found the camera to be quite comfortable, even one who uses a D80 on a regular basis. So, it’s not exactly made for me, so as usual, it’s smart to hit up a photography shop to test one out for yourself prior to taking the plunge.

Features-wise, this is a totally capable camera, for novice and pros alike. If you know how to handle a camera, results seen through this sensor are going to be magnificent. That said, the focus-points is the last thing that bothers me. Being used to looking through a lens and having eleven focus areas, moving to this camera and only having three is a large step back. But again, from a beginners perspective, the difference is not even going to be apparent.

I will relay even more overall thoughts about the camera in the conclusion, but for now we will move into image quality.