Don’t miss our creator look at the GeForce RTX 3070~3090, including benchmarks for Octane, Blender, V-Ray, Arnold, KeyShot, and Redshift.

NVIDIA’s third Ampere-based GeForce launched last week, and because it was much quicker for us to conjure up some creator-type results, we kicked off our coverage with a look at the RTX 3070 in rendering workloads (linked above). Since then, we’ve wrapped-up our gaming testing for NVIDIA’s latest offering, as well as get the 2070 SUPER – last-gen’s $499 GeForce – in there as well.

Like the previous Ampere GeForce gaming articles to be posted, this one will revolve its focus around 4K and ultrawide resolutions. We had planned to include 1440p, but limited time made it impossible to include if we planned to hit embargoes for some upcoming launches. Once AMD’s Radeon RX 6800 series launches later this month, we’ll be retesting everything and will get 1440p added in. 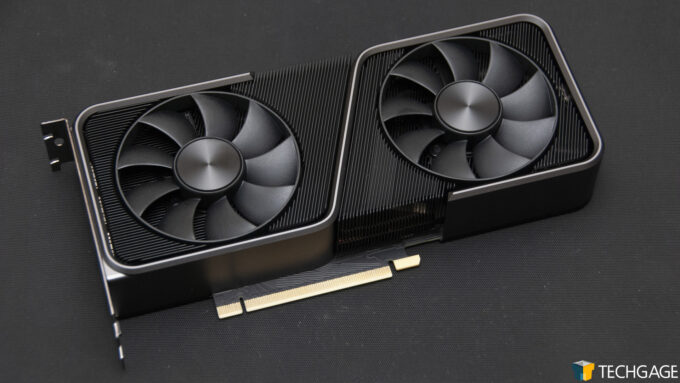 On the topic of AMD, the Radeon overlord announced last week that its new Radeon RX 6000 series is coming soon, and to our delight, we’re being promised really competitive performance. While it may be easy to sum-up NVIDIA’s RTX 3070 today, the picture could be changed up after AMD’s launch drops, especially if the numbers we’re being flaunted hold up.

To NVIDIA’s advantage, its ray tracing performance is widely expected to be better than AMD’s, although we’re not going to know for sure until we have cards in-hand and can dig in ourselves. Even if AMD were to catch up to NVIDIA’s last-gen, Ampere makes another big leap in performance itself, as we will see in our RTX game testing, and saw last week in our rendering testing.

Here’s a quick overview of NVIDIA’s current-gen line-up, with 1080 Ti added in for good measure. It will be interesting to see how that once-$699 card will compare to this two generation newer $499 option in our test results.

One thing we don’t think we’ve mentioned since the launch of NVIDIA’s Ampere is that the series uses the same NVENC chip as the previous-generation Turing cards. There’s no real downside to that outside of the fact that this launch doesn’t bring anything new for encoders, but, it has added decode support for 8- and 10-bit AV1. That will benefit streaming websites (eg: Twitch) that take advantage of the codec. Interestingly, Microsoft recently leaked that AMD’s next-gen Radeons will also include AV1 decode acceleration, so it’s good that it looks to become a standard offering soon.

This seems like enough preamble, and there are many test results to pore over, so let’s get started with a quick look at our test setup, and then get into the results:

All of the listed GPUs have been tested with current drivers, and with an up-to-date Windows 10 (2004). Our operating system is kept clean and optimized to reduce benchmark interference, ensuring accurate results. V-Sync, G-SYNC, and FreeSync are disabled at the driver and game level. Both Intel’s chipset driver and Management Engine (ME) are updated to the latest versions.

Note that some of these GPUs have been tested with drivers released before Ampere’s launch. Our sanity checks with the latest driver and game updates with the RTX 3080 showed that all results held true – except for Minecraft. Our RTX testing there had to be scrapped for this article, since a game update invalidated our previous test data. As mentioned above, we’ll be retesting all of these GPUs with the latest drivers and game updates in time for Radeon’s ‘Big Navi’ launch.

This article includes six regular game titles for testing, along with three more specific to ray tracing, two more specific to high-performance eSports, and also a bunch of synthetics with the help of 3DMark and Superposition. 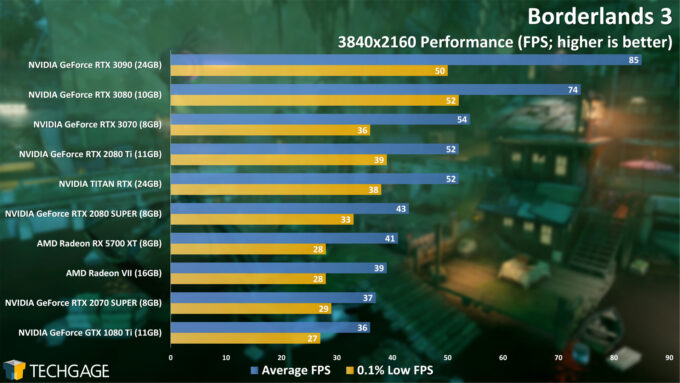 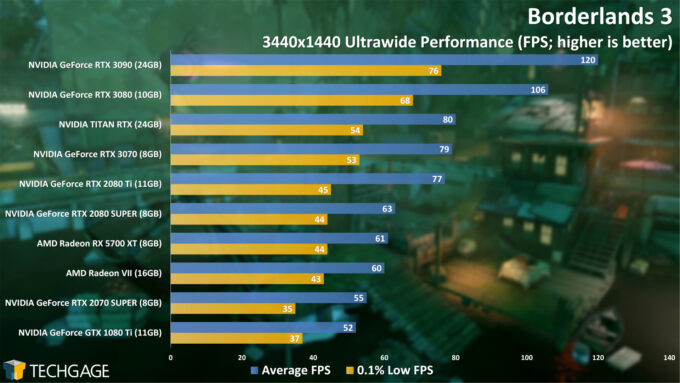 At Ampere’s launch, NVIDIA said that its RTX 3070 would perform on par with the 2080 Ti – and sure enough, that’s just the case in our first test. It’s clear that those who just acquired an RTX 3080 won’t need to feel like they should have waited on RTX 3070, because the performance delta between the cards is quite noticeable here – even with the percentile lows. 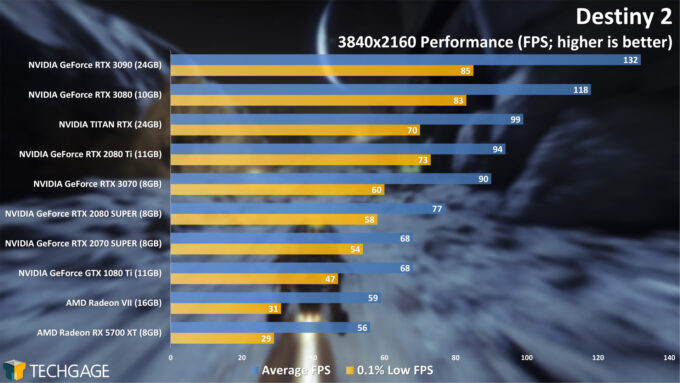 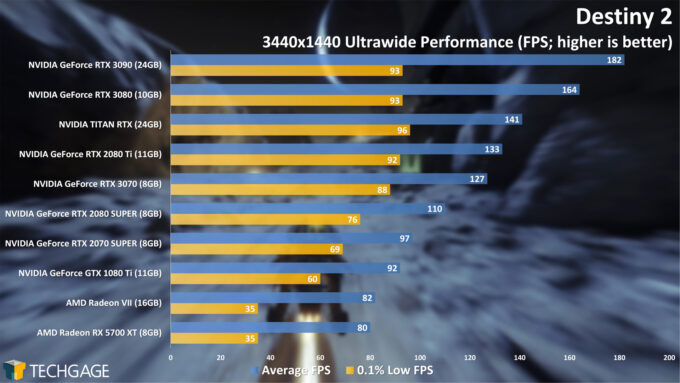 Destiny 2 runs well on every one of the tested cards here, but if you have a high-refresh monitor, you’ll definitely be eyeing some of the higher-end models. It’s worth noting that we’re using top detail here, so if you’re desperate for another 10-20 FPS, you can dial down some settings to accomplish it easily enough (namely with the shadow quality).

Ultrawide resolution is far easier on GPU hardware than 4K, so more GPUs were able to pass 100 FPS in our testing. The RTX 3090 actually managed to come close to 200 FPS, but sadly, an ultrawide 200Hz costs more than the $1,499 RTX 3090 itself, so that’s a mighty expensive proposition (but a downright drool-worthy one). 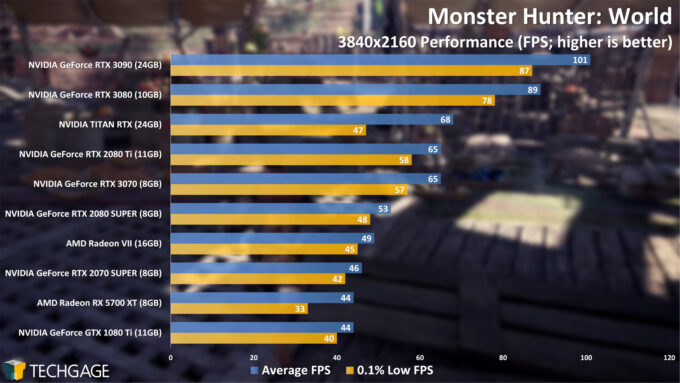 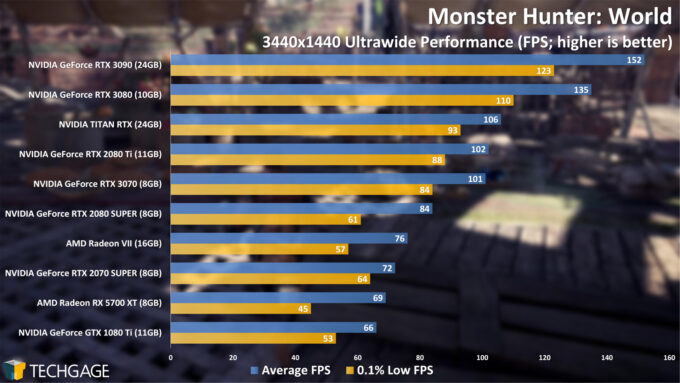 It’s becoming clear pretty quickly that the RTX 3070 and RTX 2080 Ti are trading blows like few match-ups we’ve ever seen, and we’ve only just begun our performance look. It’s almost like NVIDIA just took the 2080 Ti GPU and slapped it inside of an RTX 3070!

If you look at it from the perspective that this gen’s $499 GPU trades blows directly with last-gen’s $1,199 GPU, then it’s easy to be impressed with what’s on offer here. 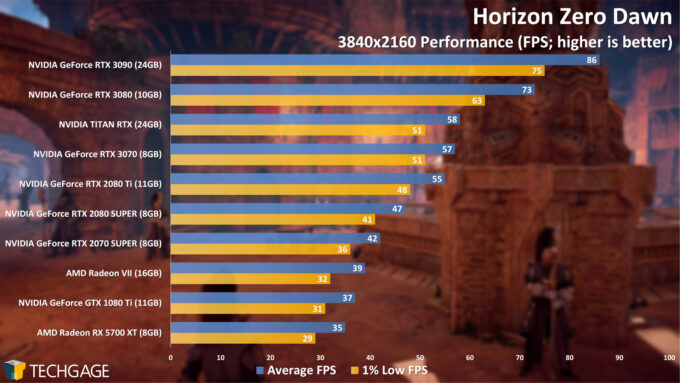 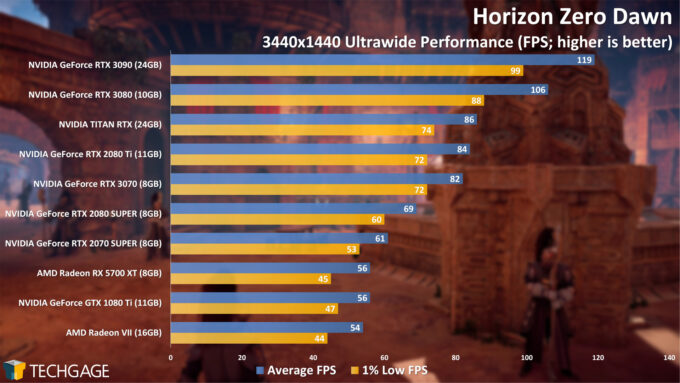 Yet again, we see the RTX 3070 and 2080 Ti trade punches, and given the minor variance between them, we could very well retest and see their positions flip around again. We mentioned above that the RTX 3070 is impressive from the perspective that it matches a last-gen card that cost more than twice as much, but another angle is that the FE also takes up less room inside of your PC, and from our testing, will also be quieter during heated gaming sessions. 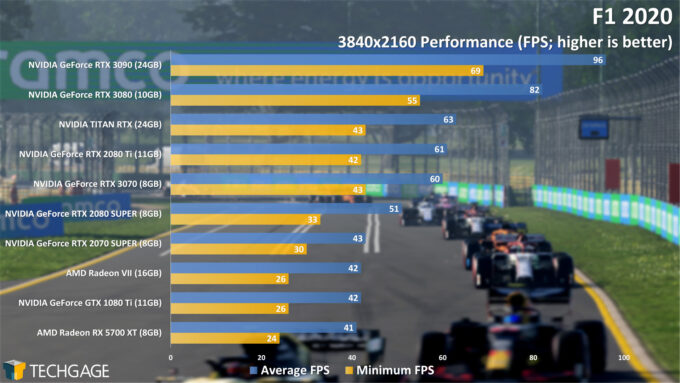 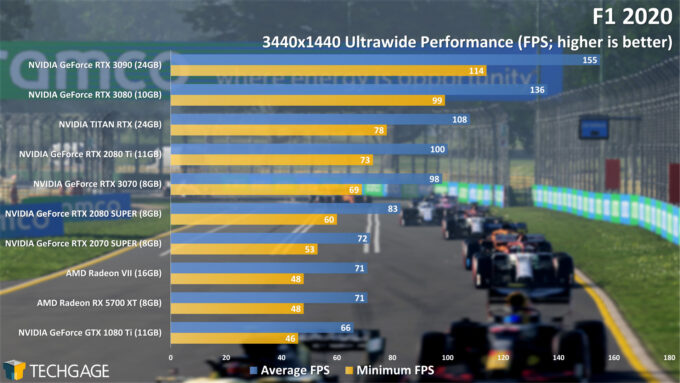 F1 2020 isn’t the most graphically intensive game in our testing lineup, but when maxed-out, it still looks ridiculously good, and does well to satiate the appetite of every Formula 1 fan. Naturally, virtual racing experiences improve with high-refresh monitors, and fortunately, the RTX 3070 offers ample performance at maxed-out detail settings, but with lots of wiggle room if you want to try to reach 144Hz. 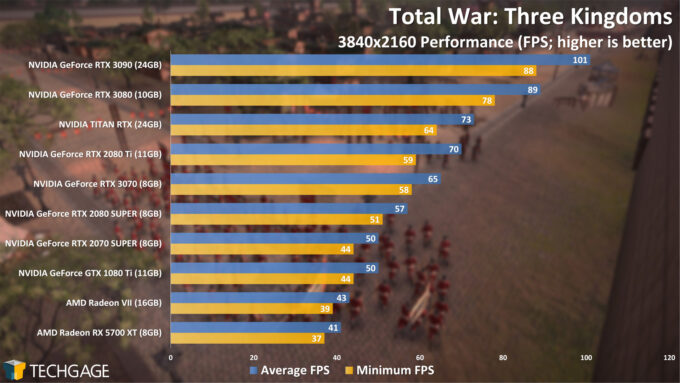 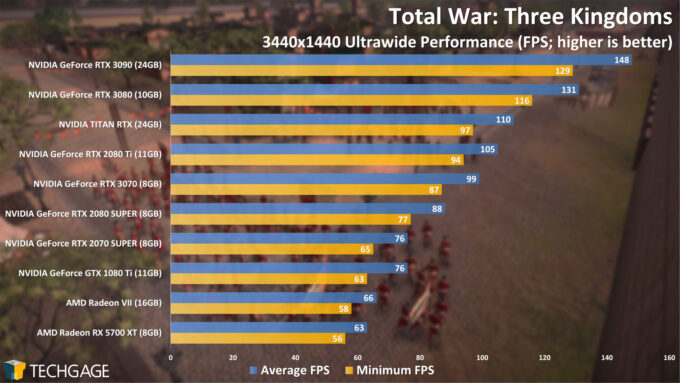 Up to this point, the RTX 3070 has traded even blows with the 2080 Ti, but the last-gen card manages to step ahead further in this game than most others. Granted, we’re talking about a difference of 6 FPS off of 105 FPS, but it’s interesting nonetheless.

It’s easy to compare the 3070 to the 2080 Ti because they are essentially equaled in performance, but a more interesting comparison would be against the 2070 SUPER from last-gen, as it was also priced at $499. The 3070 shouldn’t make 2070S owners feel like they are lagging behind, but those who are diving into a new build now will definitely enjoy a better bang-for-the-buck than anyone who recently purchased the 2070S. 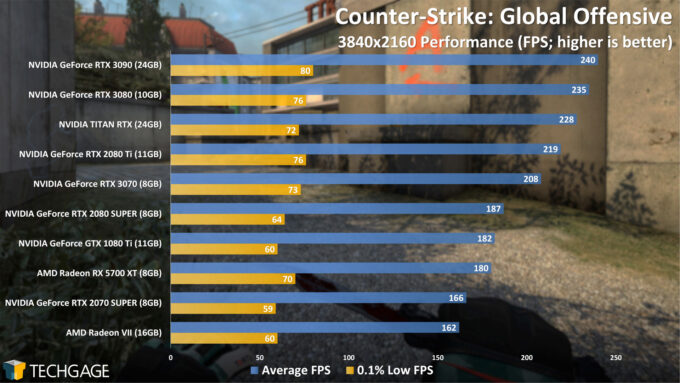 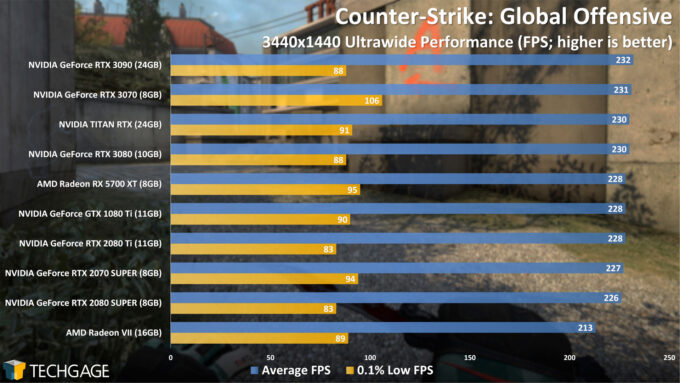 CS: GO has an obvious CPU bottleneck in our particular test of choice (a timedemo of tournament play), making 4K necessary to see interesting scaling. As a game that benefits from fast clock speeds, we’re keen on seeing how AMD’s upcoming Zen 3 will change performance in this game. Not that these frame rates are paltry. If you have a 4K/144 or ultrawide 200Hz monitor, you don’t need a top-end card to get the FPS you need. You could very well need a CPU upgrade, however. 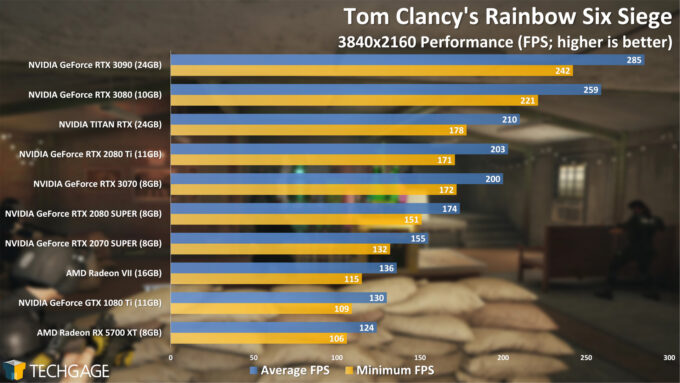 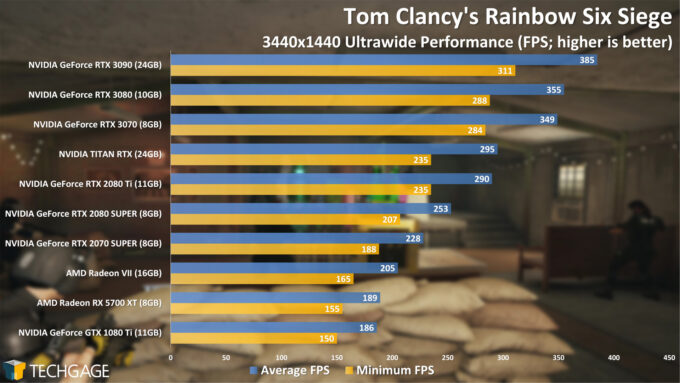 Siege is a game perfect for using one of the new 360Hz monitors that are now hitting the market. Bear in mind the performance you see is with the game at really high detail, so even if you didn’t have a current-gen GPU, you should be able to hit these sky-high FPS with some graphics adjustments.

We’re going to take a look at RTX/DXR gaming on the next page, featuring Fortnite, Control, and Quake II.