NVIDIA’s Quadro RTX 4000 has proven itself to be a fast single-slot GPU that struts some serious gains over the last generation Quadro P4000. Throughout the tests, it wasn’t uncommon to see the RTX 4000 leap far ahead of the P4000, in rarer cases actually doubling its performance – such as with crypto hashing.

With other tests, such as viewport, super-strong gains can be seen in some cases. In our real-world SolidWorks viewport test, the RTX 4000 soared to the top of the chart, butting heads with the top-end Quadro P6000 from the last-gen Pascal collection. Interestingly, the P6000 won the battle in the SPECviewperf take on the test, but that 24GB framebuffer undoubtedly comes in handy sometimes. 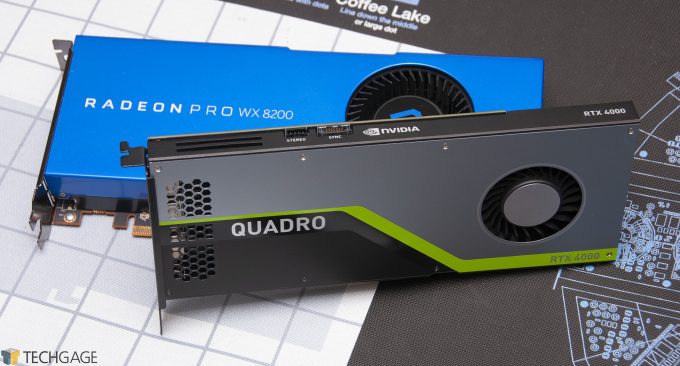 Huge performance gains were also seen in PTC Creo and Siemens NX, making the RTX 4000 a realistic upgrade for someone running the last-gen P4000, and especially any card from an earlier generation. We even saw a massive improvement with the energy SPECviewperf test, and while it may not be relevant to most ProViz users, it highlights the architecture enhancements Turing has brought to the table.

Performance isn’t everything with pro cards, but with Quadro RTX, even its coolest features tie into performance somehow. The RTX features in particular are going to be used to greatly accelerate things like AI denoising, as well as ray tracing. In fact, these two things could technically work together. It’s really up to the software developer to choose how to take advantage of the hardware on offer. We’re not just limited to FP32 anymore, either. FP16 has been unlocked on these cards, with the Tensor cores greatly improving the performance beyond what the CUDA cores themselves can muster.

On the topic of RTX features, we talked earlier about OTOY and Redshift adding support for RTX to their renderers in the future. Solid Angle plans to do the same for Arnold. Both SolidWorks and SolidWorks Visualize will be treated to RTX as well, dramatically improving rendering performance in the latter.

We will stress one thing, though: if you care a lot about the ray tracing and AI denoising perks with RTX, this 4000-series card is not going to deliver the most ideal experience with huge projects. That’s something the card’s 8GB framebuffer would also imply, and for that reason, the RTX 5000, equipped with 33% more cores and 100% more memory, should be considered. Again, that assumes the RTX 5000’s higher price tag isn’t a massive roadblock. For typical projects in software like SolidWorks Visualize (seen below), the RTX 4000’s framebuffer should not prove to be a big issue, but we’d definitely consider 8GB to be a bare minimum nowadays. 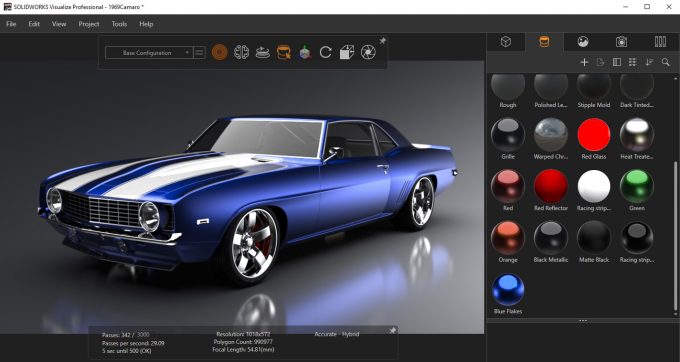 SolidWorks Visualize will adopt NVIDIA RTX in a future release

Compared to its closest competitor, the Radeon Pro WX 8200, the RTX 4000 wins most of the rounds, but AMD does exhibit strong advantages in some cases, leading us to once again repeat that it pays to know your workload. AMD’s scientific performance was super-strong for our GEMM test, but NVIDIA’s Turing hit things hard with the fast Fourier transform test. Both cards flip-flopped their strengths in crypto, with NVIDIA proving faster with stronger 512-bit SHA hashing.

There are some competitions where NVIDIA wins by default, such as with Redshift, Octane, and V-Ray, since all have been built with CUDA in mind, and in some cases only support CUDA. V-Ray is an exception since OpenCL support allows AMD cards to work, but as we’ve covered before, we’ve yet to be able to produce a render on AMD that matches (or comes close to) NVIDIA. If you are an AMD V-Ray user, please let us know if your experiences do not match ours.

What’s interesting is that NVIDIA’s RTX performs so well in Radeon ProRender, it makes you wonder how it’s even possible. There, the RTX 4000 simply pummeled the AMD WX 8200 and Radeon VII, and by a dramatic extent. Since we’re a little addicted to ProRender, we’ll continue to test as new versions release to see if anything changes.

Ultimately, NVIDIA’s Quadro RTX 4000 is a very feature-packed, and very fast workstation graphics card. Since it’s NVIDIA’s MO to undercut AMD, it’s no surprise that the RTX 4000 is priced at $900, versus the WX 8200’s $999. Dollar for dollar, the RTX 4000 wins, but again, your choice of GPU is going to depend largely on your biggest needs. A GPU that performs great in an area you don’t care about shouldn’t weigh into your final decision.