March 25, 2011 Addendum: The original price I quoted the GeForce GTX 550 Ti as was $130, when in fact it’s $150. The reason behind the mistake is that NVIDIA’s marketing materials listed a $129 price-point, but what we didn’t catch was that the company was talking about the older GeForce GTS 450 which the 550 Ti replaces. We apologize for the error.

Since NVIDIA first launched its GeForce GTX 500 series in November, the company has kept quite close to a schedule of one new card per month, with the most recent being this one, the GeForce GTX 550 Ti – a budget offering.

As the numbering scheme implies, the GeForce GTX 550 Ti is the lowest-end model of the GTX 500 series released thus far, and despite its “GTX” moniker, it is indeed a budget / low-end mainstream model. NVIDIA’s first goal with the card is to deliver great gameplay experiences to gamers using a resolution of 1680×1050 or less, and secondary on the list, the company wants to beat out AMD’s Radeon HD 5770 – a card of the same price-range.

Mentioned in one of our news posts last week, NVIDIA puts the GTX 550 Ti in the “Sniper” category of its gamer-esque naming scheme. It’s meant to be lightweight, but still pack a punch, and I guess if you want to take things literally, it could also refer to the card being silent, just as a sniper would be when hiding in the bushes.

Also, since a sniper can shoot from afar and leave a little hole in its target, NVIDIA’s GTX 550 Ti leaves a little hole in your wallet due to its modest $130 price tag. Am I thinking too deeply into this? I think so, so let’s get on with our closer look, and then dive into a look at the card’s performance!

The GTX 550 Ti could be best compared to the GTS 450, as both feature similar goals, and even share similar silicon. The cards are designed to offer the best performance per watt, but thanks to the GTX 550 Ti’s improved memory density of 1GB, along with a bus boost up to 192-bit, the memory bandwidth has been increased roughly 70%.

For more specific information on the card, I recommend reading through that news post linked to above, and for a simpler comparison between the GTX 550 Ti and GTS 450, along with the rest of NVIDIA’s current line-up, this table should do the trick:

Compared to the GTS 450, the GTX 550 Ti is the far superior card. It offers faster clocks all-around, an increased bus width and consequently far improved memory bandwidth. Given that lower-end models like these tend to struggle mostly because of a tight memory bus, this improvement might make some hearty differences in our real-world tests.

For our testing, MSI sent us its N550GTX-Ti Cyclone II, a card that features a starkly different cooler compared to NVIDIA’s reference, and also higher-that-reference clocks, with a 50MHz boost to the core, 100MHz to the shaders and roughly 200MHz to the memory. Overall, those are fairly substantial boosts, so for this article we’re including results with both the reference clocks and also MSI’s Cyclone II clocks. 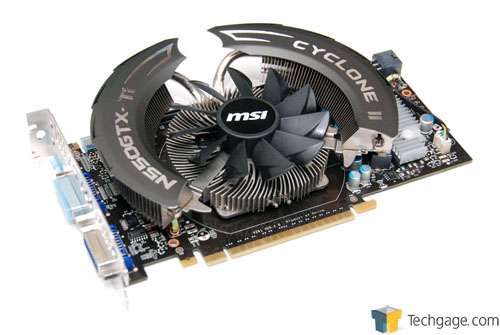 According to MSI, this card avails an additional 20% worth of airflow across the card compared to the reference, but judging by looks alone, I’d have to assume the real number would be even higher. At the same time, the cooler included here is likely to be much more efficient with heat dissipation, and it’s for one very good reason: it’s huge. Well, huge as far as “budget” cards go, anyway.

It’s so large, in fact, that once the card was installed into our Cooler Master HAF X chassis, I couldn’t even close the door, due to the fact that it has a large fan equipped on it. Now, I’ve installed tri-SLI and tri-CrossFireX setups before in that chassis no problem – but here it is, a $150 GPU that prevents me from closing the door!

To be fair to MSI, most people who run a $150 GPU are not going to be using an equally-expensive $150 chassis with a huge fan in the door. But, it’s important to bear this minor issue in mind when looking to purchase it. While the cooling ability is sure to be top-rate, if you have a fan on your chassis door that lines up with the GPU PCI Express slot, you might have clearance issues. 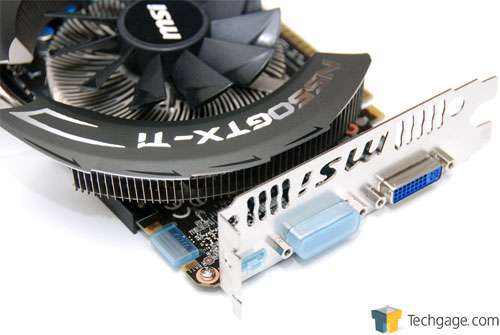 Bulkiness aside, NVIDIA includes the same array of ports on this card as it does on the others from the GTX 500 series. That includes dual DVI ports and a mini-HDMI. As you’d also expect, this card can be paired up with another down the road for an SLI setup, which could boost the performance to put the card just past the GTX 560 Ti.

Our test suite and explanation of our methodologies can be found on the following page, and immediately after, Colin McRae: Dirt 2 testing.