Under the combat naming scheme that NVIDIA launched with its GTX 480, the GTX 550 Ti falls into the “The Sniper” category – a silent, yet deadly option. It targets a 1680×1050 resolution, a $129 price-point, and of course, DirectX 11 support  in full. It’s a budget card that aims to not feel like a budget card. 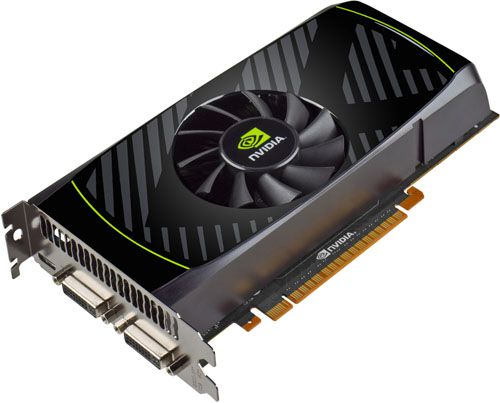 Thanks to our friends at the Canadian border, we still haven’t received our GTX 550 Ti sample, but once it does hit our lab, we’ll be churning out our in-depth look at it in due haste, so stay tuned for that. For now, let’s review a couple of things that NVIDIA shared with us during a briefing last week.

Although NVIDIA’s other GTX 500 series of cards have a good focus on performance per watt, the GTX 550 Ti kicks things up a bit. Also, thanks in par to A) a wider memory bus (128-bit to 192-bit) and B) the ability to mix-and-match GDDR densities to achieve a 1GB framebuffer, the GTX 550 Ti improves bandwidth by 70% compared to the GTS 450. This upgrade is long overdue as far as I’m concerned, and the results should be easily seen in our benchmark results. You know, when we’re able achieve them!

According to NVIDIA, compared to AMD’s Radeon HD 5770, the GeForce GTX 550 Ti is 38% faster in StarCraft II, 35% faster in Civilization V, 25% faster in F1 2010, 42% faster in Lost Planet 2, 18% faster in Call of Duty: Black Ops and 50% faster in Tom Clancy’s H.A.W.X. 2. In addition to performance, NVIDIA continues to tout its class-leading DX11 performance, especially with regards to tessellation. 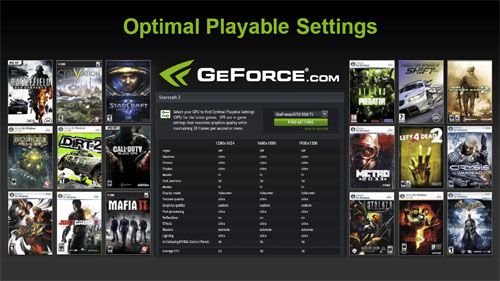 Overall, the GTX 550 Ti looks to deliver a good amount of performance for its $130 price tag, and I’m looking forward to taking it for a spin to give you guys our results. I’d expect to receive the card over the next couple of days, and will likely be able to publish our review prior to the weekend. As always, stay tuned.

During the same briefing, NVIDIA touted its newly-launched GeForce.com website (pictured above), and a feature that I consider to be simply “awesome”. It’s essentially a tool to allow gamers to choose a game, and then the model GeForce card they’re using, and with those two bits of information, NVIDIA tells you which settings to use at which resolution in order to achieve reliable gameplay performance. This should really prove beneficial to many gamers who don’t care to tweak themselves, so kudos to NVIDIA for rolling out such a feature.