by Rob Williams on August 28, 2008 in Graphics & Displays, Trade Shows

NVIDIA’s SLI won’t be available on X58? Think again! The company has just announced ‘native’ support on select X58-based motherboards, all without the use of their own chipset. Dual-GPU configurations will be enabled without a bridge, while the higher-end offerings, including a potential Quad-GPU, will.

In a press briefing following the conclusion of NVISION, we were given the exciting news of native SLI support on Intel’s upcoming X58 motherboards, meaning purchasers of Nehalem will not have to go without the dual-NVIDIA GPU setup they crave. This is a big win for consumers, but raises numerous questions that we’ve had recently and for a while.

Before we get into all of that, what does this mean to you? If you purchase an X58 board that NVIDIA has certified for SLI use, their driver will recognize it and enable both GPUs to work in unison. If you are using a non-certified board, then you will lack the SLI ability. Any given certified board would have reached that status by having been submitted to NVIDIA for their quality control. They noted that they primarily look for placement of board components among other things, to make sure two GPUs beside each other would even be possible.

As you will see in the available slides, NVIDIA will be offering a variety of configurations for both dual-GPU, triple-GPU and even quadruple-GPU. The company hasn’t unveiled a 4-way configuration yet, but this slide proves that the functionality is in the works. Without the use of the nForce 200 bridge chip, NVIDIA offers a many different possibilities, as illustrated in the slides. The basic configuration will be 2 x 16x, although other solutions are available to allow triple-GPU and quad-GPU with the use of 8x lanes. 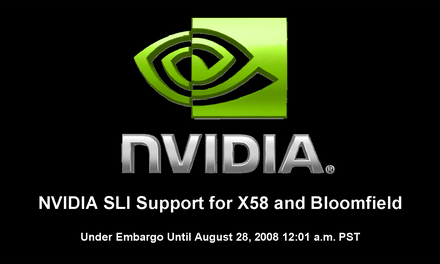 Advanced configurations will require the nForce 200 bridge chip (which will add some additional cost to the board). The first scenario is a triple-GPU solution that enables all three slots to run as 16x, while the other config is with four GPUs at 16x. The latter requires two bridges for the lane splitting, however, which means it will be seen only on very high-end offerings (unsurprisingly). 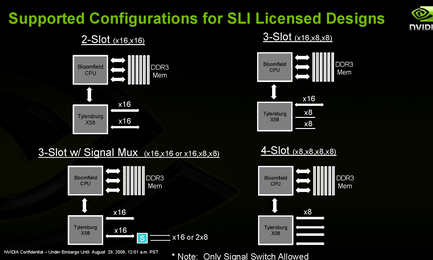 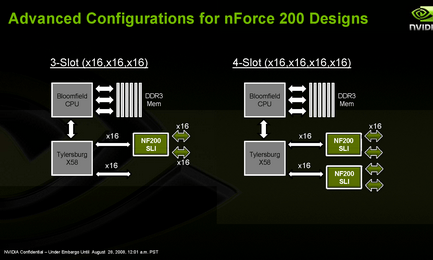 This is all great news for consumers, but what might strike a few people odd is that NVIDIA has never offered SLI via software before, and in a sense, it proves in some regards that the nForce 200 bridge chip was never needed with other platforms, such as Skulltrail. You can create your own conclusions here, but the simple answer is “that’s business”.

Will NVIDIA be supporting SLI on older platforms, then? Not surprisingly, no, because they are allowed to offer chipsets on previous LGA775 motherboards. Nehalem is different, since Intel refused NVIDIA to their QPI architecture, and likewise with NVIDIA… they didn’t want to hand over free SLI support. The fact that NVIDIA will now be offering SLI support on X58 has nothing to do with Intel, as it’s a technology that will simply be supported via an approved driver, as long as you have a certified motherboard. 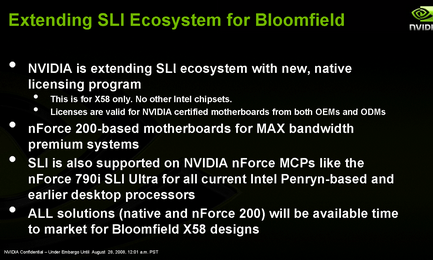 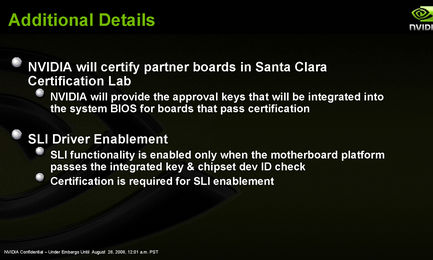 NVIDIA will still make money off these deals as the board vendor will have to pay for the certification, and who knows, they may also make more money off additional card sales from those consumers who have decided against the nForce chipset in the past. Though the announcement might rub a few people the wrong way, especially with the lack of legacy chipset support, it’s great news for those who are looking to upgrade to Nehalem at launch. In a sense, it’s too bad that support had to be enabled by refusal of QPI licenses, but it will be here, some way or another.

What benefit this new announcement now opens up is even richer functionality on certified motherboards. For both enthusiasts and site editors, like us, it means we can now benchmark with single-GPU, Crossfire and SLI all off the same motherboard. That should make benchmarking a smoother task, and given how time-consuming it can prove to be at times, I’m looking forward to it. In addition, NVIDIA stressed that the software driver will not offer weakened performance over their current available SLI solutions.

What X58 motherboards will support SLI are currently unknown, but NVIDIA has models in their plan and I’m sure that boards are already being developed from companies like ASUS, Gigabyte and others. Overall, this new finding will no doubt be a relief to many enthusiasts, and in truth, it probably had to be done. Neither Intel nor NVIDIA were agreeing on swapping technologies, but the consumer seemingly will still win in the end.