The ION from NVIDIA, first seen two weeks ago at CES in Las Vegas, has been garnering its fair share of coverage since we posted our first look at the pico-ITX platform last week. While at the NVIDIA booth, we were actually allowed to sit down, or rather stand up, with the ION platform and run our own benchmark runs to see if it jived with the numbers handed out by NVIDIA in their press kit.

Before we get to deep in our analysis, let’s take a look at the different pieces of ION and where NVIDIA is trying to position themselves with the platform.

For this platform, NVIDIA has enlisted Intel’s tried-and-true Atom processor. Consuming under 10W of power and built using the 45nm process, the Atom’s have been one of the driving forces behind the emergence of the netbook phenomenon over the past year or so. As sales of the lower-power, ultra-portable netbooks continue to climb further and further into the stratosphere, each and every one (aside from a few VIA powered books) leverage the new Intel silicon to great effect.

At the other end of the ION, we have the NVIDIA-developed GPU. Using the GeForce 9400M, the same chip powering Apple’s MacBook Pro and MacBook Air, NVIDIA has taken this mighty mobile GPU and stuck it on the same board as the Intel Atom. Clocked at 580 MHz with 16 Shader (or CUDA) processors, the 9400M is capable of true 1080p HD playback. 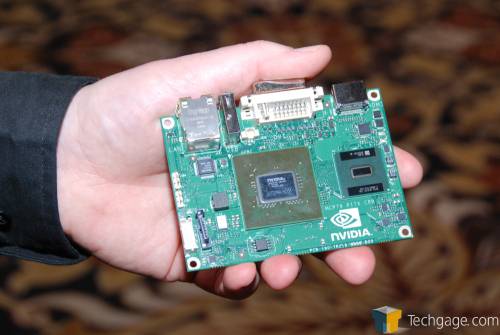 We witnessed such playback first hand at CES as the guys in green had an ION setup streaming 1080p content at right around 40 Mbps (which is equivalent to top-end Blu-ray movies). With this silicon, NVIDIA can off-load many everyday tasks from the Atom and onto the 9400M.

Using their GPU to transcode video, accelerate Photoshop and run Vista’s Aero, NVIDIA now has a machine that can literally fit in the palm of your hand, and while none of us expect to see this platform popping up at the next AsylumLAN, it’s even powerful enough to churn through Call of Duty 4 with playable frame rates at 1024×768. Not bad for a machine that’s not much larger than the mouse used to interact with the display it renders!

What We Worked With

Housed in a black aluminum chassis and armed with a Dual-Core, Hyper-Threading Atom 330, NVIDIA wasted no time in showing us just was the reference ION system was capable of doing. Handing Rob and I both press sheets full of information pertaining to the day’s demonstrations, they quickly started showing off what the ION could do compared to an Acer netbook.

As we mentioned in our â€œBest of CES 2009” article, the comparison between the ION and the netbook wasn’t too fair overall. We were shown a streaming HD clip of the Vegas strip at night running on both machines, and while the netbook produced what can only be called a slide show, the ION kind of shrugged its shoulders and asked for more punishment.

To be fair to NVIDIA, their intent throughout the demonstration was not to show up the netbook, but rather to show just how powerful a netbook can be using the ION platform. In that context, a netbook could suddenly become a viable replacement for a notebook power user on the go.

Before we go on, the ION on display consisted of the following specs: 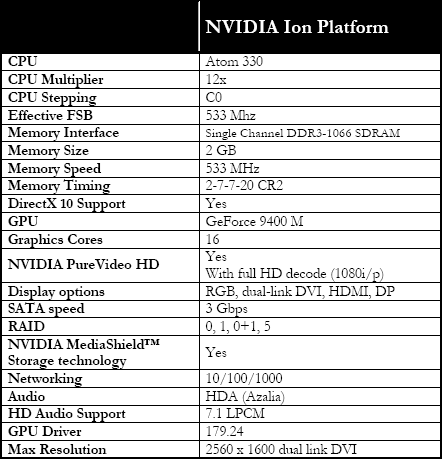 The box that we saw was dressed to the nines. NVIDIA wanted to show off the many I/O options that their OEM partners can use to meet the needs of a particular market. The demo machine had VGA, DVI, HDMI, Ethernet, six USB 2.0, 2 eSATA, optical audio and 7.1 surround sound audio. This is quite a bit of ports for such a small device, to say the least.

This flexibility will allow system builders to pick and choose which options they want to offer on their ION based devices which in turn, should allow them to keep a few SKU’s prices in check when these machines start to hit the market sometime later this year. NVIDIA also mentioned during our meeting, that if a manufacturer wanted to scale peripheral functionality way down, the device could become almost half the size of what it is in the image. 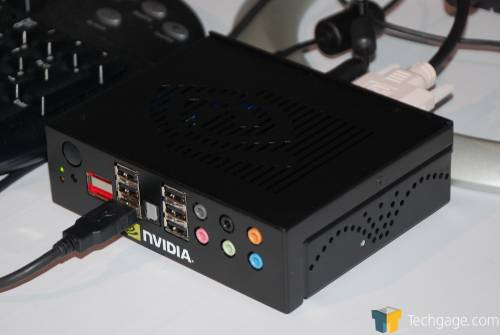 As we mentioned earlier, the first thing we were shown was a short look of an aerial trip down the Vegas strip. The MPEG4 AVC kept a pretty consistent 40Mbps average. More interesting was the CPU usage throughout this demo. While the 1080p content was being displayed, the CPU usage bounced between 8 and 18 percent and averaged out around 13 percent. This was a good way to showcase the power of the NVIDIA 9400M and makes a great case for anyone looking for a space-conscious HTPC. 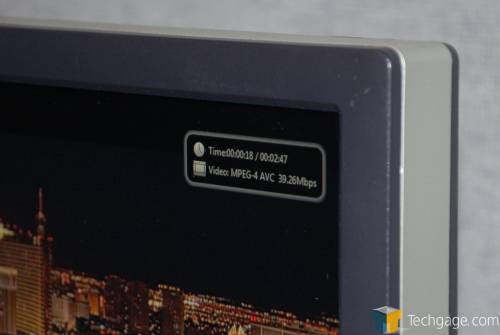 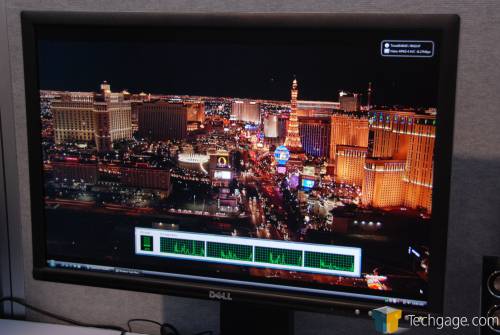 We know that it can run high-definition movies, but what else? On the next page, I’ll take a look at the few gaming examples were we shown during our meeting, and also discuss other potential the ION holds.