When we last checked in with PhysX, we saw a new mobile PPU, an Unreal Tournament III modification and news of Warmonger, an over-glorified tech demo. That was last September, though, and much has happened since then, so it’s about time we get caught up.

The most notable thing to happen to PhysX in the past nine months has of course been the acquisition of AGEIA, by NVIDIA. An acquisition was inevitable, so when it finally did happen, it was more of a relief than anything. So what’s happened with the technology since then, and what’s in store?

PhysX support on NVIDIA GPUs, of course, which will be the focus of this article. ‘GPU Physics’ is not a new term, because ever since AGEIA showed face, both NVIDIA and AMD, among others, discussed the benefits of executing such algorithms on the GPU, and some even showcased real demos. But it wasn’t until recently that GPU physics was something we could actually take advantage of in our own homes.

But, nothing good seems to come without some bad, and that bad is backlash against NVIDIA over the new drivers, which results in increased 3DMark Vantage scores. As I touched on in a recent news post, NVIDIA isn’t so much cheating the system as they are re-routing where the physics are being processed. Instead of being calculated on the CPU or PPU (add-in card), it goes to the GPU, where it can be processed much faster.

It’s all a matter of opinion, but I am having a hard time understanding how NVIDIA becomes a “cheater” in all of this. The new driver does inflate 3DMark scores, but this is a feature that Futuremark implemented into the benchmark. It ships with PhysX support, and now that NVIDIA GPUs can support PhysX calculations, it makes all the sense in the world to execute them there. One thing that is unfortunately being overshadowed is that the new driver not only helps achieve higher 3DMark scores, but it is also the beginning of physics acceleration using hardware we already own, which is sure to result in some cool gaming experiences.

One person who I think summed it up rather brilliantly was Mark Rein, VP of Epic Games, who our friends at HotHardware queried for input regarding the recent controversy:

“This is a great thing as high-end Nvidia cards number in the millions, or tens of millions, compared to Ageia PPUs which obviously numbered far, far less. So Nvidia has done a cool optimization that allows their customers to get more value and performance out of their graphics cards. How anyone could possibly confuse this for a bad thing is beyond me.” 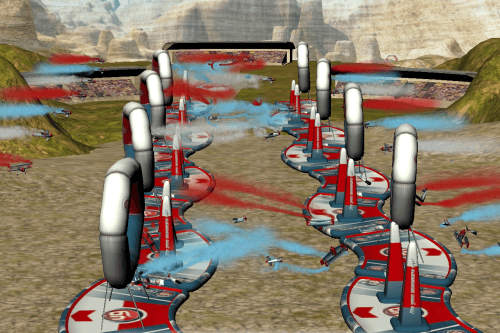 Alright, you get it… PhysX offers more than increasing scores in arguably non-important benchmarks. That’s the upside… the downside is that aside from 3DMark Vantage, there is currently lacking PhysX support. The only game right now to exhibit any benefit is Unreal Tournament III ¹. You might recall that UT III was the game AGEIA themselves were riding on for PhysX support to really pick up steam. Now with NVIDIA backing the technology, we should see even greater adoption in the months and years to come.

On the next few pages, we’ll be taking a look at what the GPU PhysX acceleration offers, both compared to a PPU add-in card and also the CPU.

¹ I forgot all about Ghost Recon: Advanced Warfighter 1 and 2. They can be patched with PhysX updates, but NVIDIA’s drivers do not currently support these. They will soon, however.