Since our new mini-ITX test system is still being finalized, we once again turn to my personal rig to act as the platform with which to see how easy (or difficult) it is to build a system within the Manta, as well as to see how the thermal performance stacks up.

When it comes to working inside the Manta, it’s easy.  Very easy. Often a small form factor chassis will have a unique layout that reduces the overall footprint, while at the same time reducing the amount of space there is to work in. This time around however, thanks to the more traditional layout of the Manta and the fact that the somewhat antiquated 5.25″ drive bay has been dropped, the interior felt almost cavernous.

We decided to see if the mITX-only Corsair H5 SF all-in-one liquid CPU cooler would fit in the Manta, but sadly the raised cover used to hide cables to the right of the motherboard came into contact with the mounting bracket for the cooler.  That meant swapping out the H5 with a Phanteks PH-TC14S air cooler, however before starting we knew full well that the 140mm fan would extend over the PCI-e slot if installed vertically.  Instead we flipped it 90 degrees after relocating the rear exhaust fan to the top panel, so those using specialized or larger coolers should do their home work first.  Coolers with 120mm fans should not have either problem problem and can be installed in any orientation. 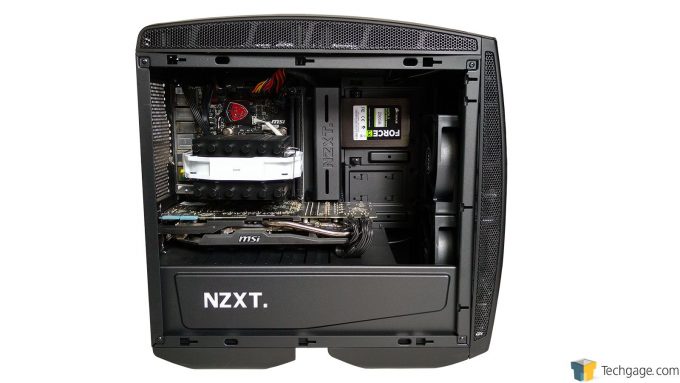 All of the other components installed cleanly and securely without any clearance or alignment problems. The curved side panels afforded us more than enough room to run our cables, and the raised cover between the motherboard and the drive area kept the build looking neat and tidy, meaning we didn’t have to spend extra time on silly things like cable management.  Also, those planning on using all in one liquid coolers with multiple fans should be pleased as punch with the integrated fan controller, which still had enough connections left, even after all of the case fans were connected. 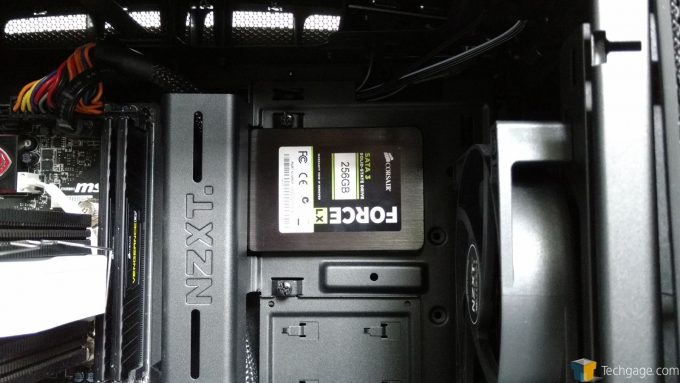 Stock CPU settings were obtained by reverting to the default settings via the motherboard BIOS, while a the stable overclocked frequency of 4.2GHz was reached by simply setting the multiplier to 42, leaving the bus at 100mhz, and increasing the core voltage to 1.22V.  Final GPU clocks of 1,200 MHz on the core and 7,200 MHz on the memory were achieved using MSI Afterburner after adding the maximum possible voltage of 100mV and increasing the power limit all the way to 20%.

I can’t recall the last time I’ve run any type of air cooling, and I have to admit that I’m very impressed by the numbers when it comes to the overclocked load temperatures of the CPU.  Our testing is designed to provide the best possible results under the worst possible conditions, so while 80 degrees is quite high, especially if that’s where the chip was to sit 24/7, there’s still 20 degrees left before thermal throttling kicks in.

Also impressive is the overclocked GPU temperature of 82 degrees.  There is plenty of headroom left here as well, however we pushed our card to the limit in terms of stability and it just couldn’t give us anything beyond the clocks mentioned above in the testing methodology.  Those with GPUs that can overclock beyond the one we used will certainly see higher temperatures, as will those with less capable cooling solutions, but in most cases we feel that this is what the majority of overclockers are likely to settle close to, therefore their readings should more or less fall in line with what we saw.

This extra headroom on both the CPU and GPU speaks volumes about the internal design and cooling capability of the included fans.  Air isn’t obstructed by a drive cage since 5.25″ devices are not support in the Manta, and the FN120 fans move a decent amount of air without generating a lot of noise at 45CFM and 21dBA respectively.

Speaking of noise, the Manta is pretty much dead quiet in every regard, even with the three included fans running at 100%.  The trio of FN120 fans are fantastic for those who want their system to remain as quiet as possible.