I’ll admit that we’re incredibly late getting this review posted, but it’s one that I’ve wanted to ensure saw the light of day for quite a while, especially after seeing the respectable numbers that could be had with cooling duties handled by an air cooler.  Liquid cooling users should be over the moon because we can just imagine the numbers that the chassis will turn in considering the Manta was designed to handle 280mm radiators on the front and top panels.

From a design standpoint, there’s not much that can be found to gripe about.  The frame is rigid, as are the side panels, the included fans are powerful and remain quiet when run at full speed, the removal of the 5.25″ drive cage means unobstructed airflow from the front fans, and the included fan controller negates a huge catch-22 of using a mITX motherboard, which is the lack of fan headers.

If we can had to complain about anything other than the larger footprint, which comes close to matching a mid-tower chassis in height and width, it would be that the fan controller requires a 4-pin Molex connector to supply power rather than a SATA connection.  For modular power supply users, this means an extra cable to connect, but thankfully there’s lots of room to hide additional cables in the power supply compartment.  The choice to go with a Molex connector could be due to the fact that it can supply more power than a SATA connector can simply due to its design, which would make sense since the integrated fan controller needs to run 8 fans, plus the rear panel and power supply cover LEDs 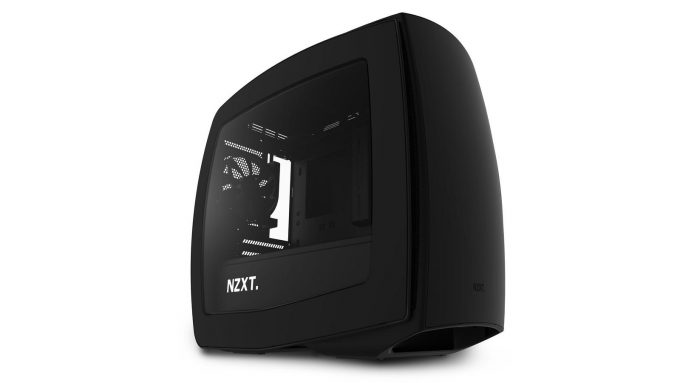 Let’s talk about a different kind of sense though.  Dollars and cents.  The Manta with the windowed side panel will set you back a cool $130 USD , while the model with the solid side panel is current selling for $128 USD.  This is a fairly steep price tag given the other mITX-only chassis available at one major online retailer that we checked, however after concluding testing we feel that it’s a good value given the points listed above.  Try not to let the three digit price tag hang you up, because you do get what you pay for

Due to the excellent design, build quality, thermal performance, and quietness of the NZXT Manta, we’re happy to slap an Editor’s Choice award on it and call it a day.

Now, it seems like ages since I’ve dated a super model.  Darn.  Still not working.