The overall fit and finish of the H2 was absolutely perfect with all parts installing cleanly without any clearance issues, and boy, that little socket was mighty useful when installing the motherboard standoffs because the pre-drilled holes were quite tight at times. 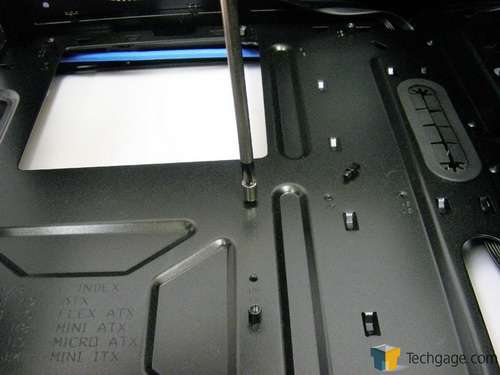 For the hard drives, the front ends of the trays needed only a simple squeeze and they slid out the front. Mounting drives was easy enough by putting four screws through the bottom of each tray and into to the drive itself. As mentioned before, there are metal pegs surrounded by rubber washers that need to be removed before installation. 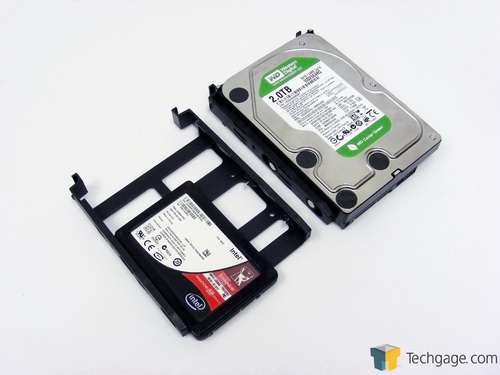 What I don’t understand is why the trays were designed the way they are. The metal pegs and rubber washers on the sides fit perfectly in the screw holes on the sides of a 3.5″ drive. When I was checking out the trays for the first time, I thought that’s what they did but after a closer inspection found that the rear and forward mounting points slide in opposite directions.

In order to truly make this mounting system work, both points should slide in the same direction making these drives mount without the use of tools. Even though the installation guide makes no mention of mounting drives in this fashion, I’m left to wonder why the pegs are even shipped with the case. 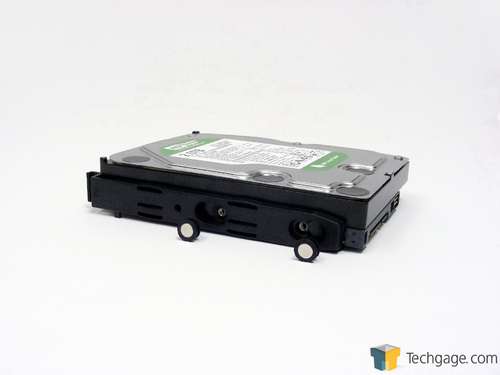 Cable management is very easy with enough options to keep any build looking very clean, but I do have one knock against the full fleet of NZXT cases that feature grommets around the cable management areas. The rubber used is almost too soft and has a tendency to over flex and pull away from the motherboard tray. Getting them back into place can be an ordeal, especially if a large number of cables have been routed through the opening. Extra care and patience, both of which are not my strong suit at times, can offset this. 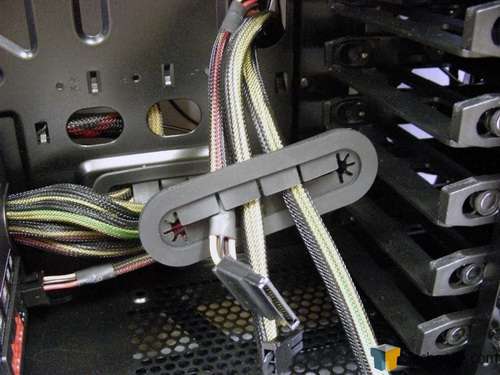 Thanks to two different options for running the 12V power lead, our test system was able to keep visible cables to a minimum by using the middle top opening instead of having the cable routed through the top left opening and along the top of the motherboard. 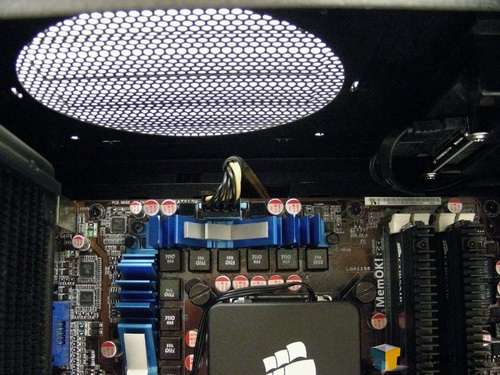 There could be a small snag when it comes time to install the GPU however. Longer GPUs and/or GPUs with connectors on the edge that face the hard drive bays may have clearance issues seeing how they could interfere with the power and data connections on the hard drives.

If a Crossfire or SLI setup is run with cards of this nature, the number of drive bays that are available could be limited. Even some of the largest cards available today will have issues regardless of the location of the power connectors. The GTX 470 used in our test system only measures 11″ and you can see how close it comes to being up against the drives, so do your homework before ordering the H2 or a GPU. 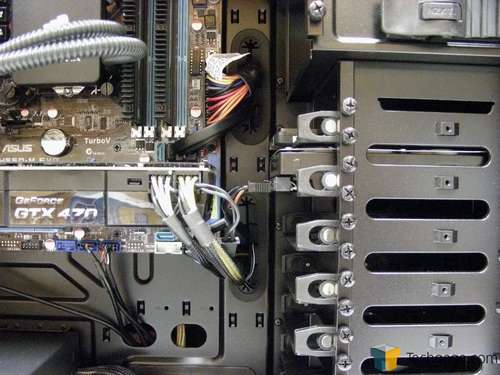 I also have to question the positioning of the bottom fan area. Many companies include a bottom fan but so few cases actually allow for it without some sort of sacrifice. In the H2, the sacrifice that must be made comes in the form of removing a hard drive tray in order to have the necessary clearance to mount the fan. At least the mounting area is far enough forward that there should be no conflicts with most standard size power supplies. 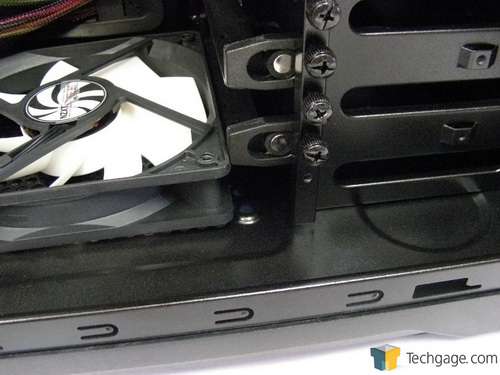 Finally, a quick test of the top SATA hot swap bay went like clockwork. The drive was easily recognized when inserted and there was just enough clearance to even put the cover on while the drive is installed in order to keep the look clean although I would be careful about how hot the drive may get seeing how the cover does not allow for any air to circulate. 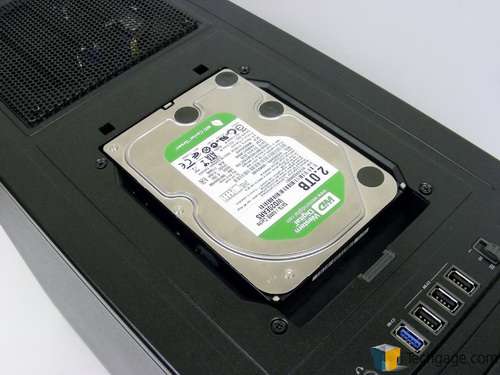 I just love a flawless build but how will the H2 perform? 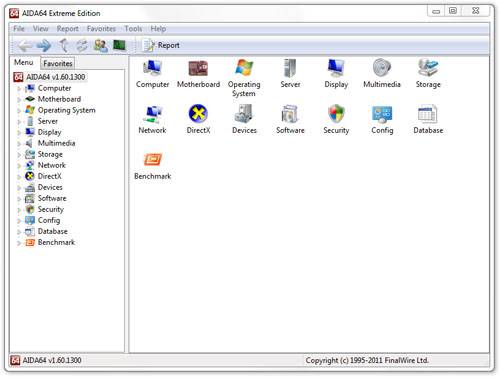 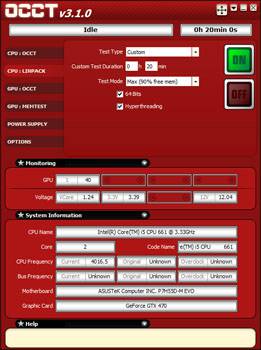 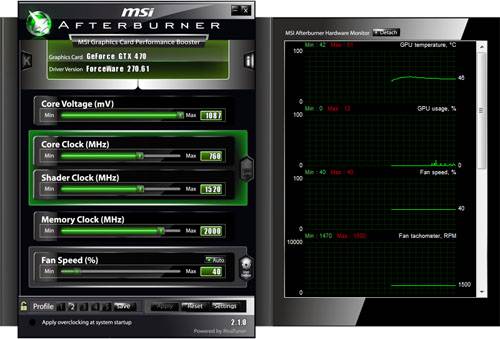 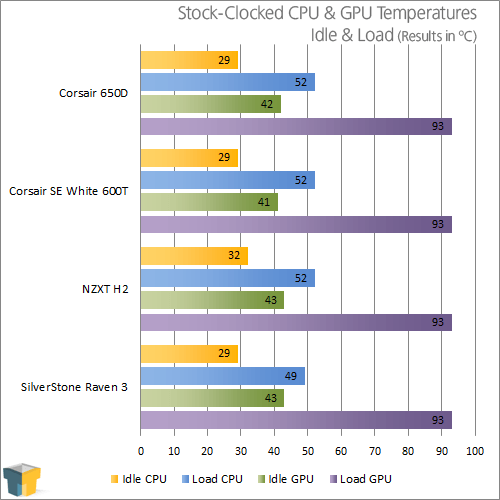 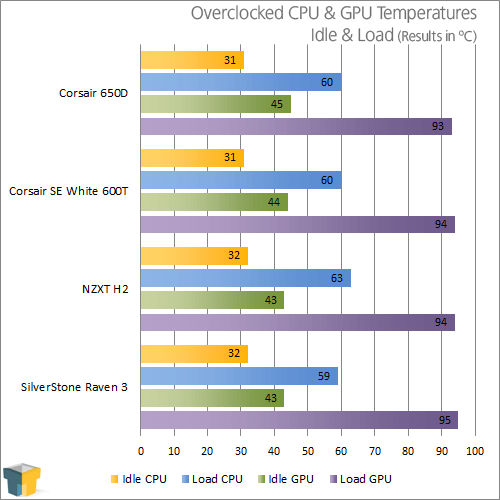 Going into testing I was pretty much prepared for these results seeing how both side panels are solid and three of the six sides are lined with foam, which can trap heat. Also, the airflow is strictly front to back when using only the stock fans but the option is there to add top and bottom fans to help with cooling so I’m sure temperatures would go down a few degrees with them installed. Seeing how the largest increase is only 3 degrees with the CPU overclocked and under full load, I’d say the H2 still does very well, although mileage will vary depending on the cooler being used.

To offset the higher temperatures, the H2 allows for a very quiet build. The loudest component in our test system is the Corsair H60 due to the fan spinning at 100% all the time but even this is muffled somewhat. With the included case fans on high it almost seemed creepy to be sitting beside a computer and not have any noticeable system noise. It just goes to show how accustomed one gets to ambient noise.

Higher temperatures aside, there’s nothing else that I can say about the H2, so I’m ready to call it a day.