The Tempest proved quite painless for installation, thanks in part to all the room it avails and also the helpful cable management system.

NZXT has moved the motherboard up to the top of the case about as far as possible. This allows better positioning of components and far more effective use of space. They have also mounted the motherboard tray deeper into the chassis to allow more room for the tallest heat sink. If your motherboard can hold it, there is no heat sink that will not fit in this case. 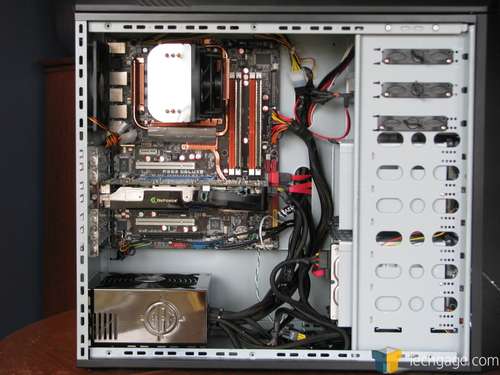 Another feature very much worth noting is the chassis’ length. Another all too common problem with cases is that when using a longer high end video card, you can run into interference issues with the hard drives. Here is another problem that has been taken into consideration and solved by NZXT with this case.

My main gripe is the power supply mounting. At first, I noticed the PSU mount was reversible, which I was quite pleased with because I dislike the fan facing up (due to the ability to drop screws in during installation). However, I could not mount my particular power supply any other way than fan facing up as it just didn’t line up properly. The support under the PSU should have been made removable and that can easily be rectified by some slight user modifications.

The other flaw with all cases with bottom mounted power supplies is the lack of wire length. This is more of the power supply companies fault considering how many new cases are coming this way but I still feel it needs to be mentioned. I had to use a 12″ 8-pin EPS extension to avoid running it on top of the video card and motherboard. It is time for the power supply manufacturers to step up and either include these extensions or to lengthen the wiring.

NZXT also deserves a nod for including a full complement of fans. I have seen too many expensive cases with multiple fan ports left bare. Including them all on a case with this price-point is a very nice and appreciated touch. Add to this the ability to stuff the new eATX spec motherboards in here and you have a great deal considering the estimated $100 price tag this case is set to debut at.

To me, the Antec 900 is the Tempest’s direct competition. I personally have been using the 900 in all my builds because it offers the most airflow for the dollar. It is a good case, but it has quite a few flaws. The original version had poor wire management features and it is somewhat crowded inside. Despite those flaws, it was the airflow leader and was the best budget case out there. To me that has changed.

Side by side, these cases look almost identical. The Tempest is about 4 inches longer, but it is basically the same height and width. That is where the similarities end. The Tempest maximizes the use of interior space and it definitely pays off. Even my full ATX spec system with the monstrous 8800GTS looked small installed. I have no problem going on record stating you will not have clearance issues with any current graphics card and your hard drives.

All those fans also make for very effective cooling. Great airflow will enhance the ability of even the weakest heat sink. I specifically chose the budget Freezer 7 for this review just to prove how airflow is a main factor in keeping things cool. The freezer 7 is possibly the best budget cooler and our test furnace QX6850 can push even the best coolers to the brink. 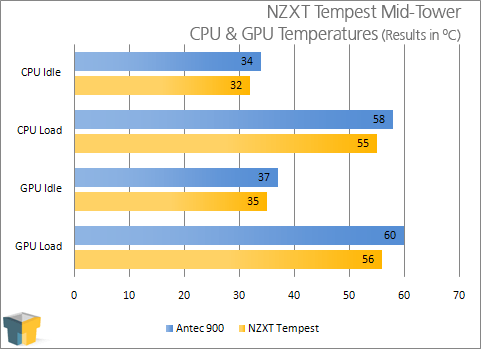 Not an amazingly large difference, but the NZXT won this contest. This is mostly due to the extra room and the larger top opening allowing that much more airflow inside the chassis. The â€œAirflow King” crown has passed on from the 900 in my book.

I am awarding the Tempest an 8 out of 10. It is a great case and I can indeed say it does have far above average airflow. It scores high in the looks department and it is very roomy for its size. Fit and finish is excellent as well. The ability to not only hold 8 hard drives but to do it without compromising on space is a very good feature. Even with the biggest graphics cards, you will still maintain the ability to run all 8 as well. Wire management capabilities are also better than average. All in all, a great case with all the flexibility you will need for your next build.