If you happen to be on the lookout for some great DDR3, you are in a good position. Although the latest memory architecture launched less than a year ago, the choices today are better than ever. Not to mention that pricing has improved drastically as well.

Indeed, things have improved quite a bit in the past year. When DDR3 first launched, alongside Intel’s P35 chipset, times were exciting. Faster speeds, lower power consumption – it seemed like a win/win. All until the pricing information was revealed, which as expected, was high enough to the point of being asinine.

At that time, most 2GB kits of DDR3-1333 speeds retailed for $500 on average. This was unacceptable given the fantastic DDR2 prices. But since DDR3 was fresh technology, no one expected the pricing to be any different. This of course wasn’t the fault of the memory companies, as the chips themselves are what proved so expensive, and the fact that they were being produced in such small quantities.

Most companies who launched DDR3 at the official launch date actually lost money on their offerings for months, and some even today, I’m sure. Huge prices and not enough demand… not a good situation.

As mentioned though, things are improving rapidly, and adoption is picking up. We mentioned a $500 kit above… the same kit now retails for $235 on one popular e-tailer. Faster kits, such as the one we are taking a look at today, hover around the $350 mark. When compared to DDR2, it’s still expensive, but for those who are looking to pick up a DDR3 motherboard, the prices are far easier to stomach than ever – and things will only continue to improve.

OCZ are no strangers to memory. They hit the market in 2000 with their DDR1 offerings and have been building on a great foundation since. They started out small, but have since evolved into a rapid-growing company that caters to the enthusiast and novice alike. Part of their success can be accredited to a few people they employ, such as Dr. Michael Schuette, who heads up product development.

Even CEO Ryan Petersen gets his hands dirty on a regular basis, and the dedication of the entire staff has made the company a serious threat to competitors who’ve been in the market longer. 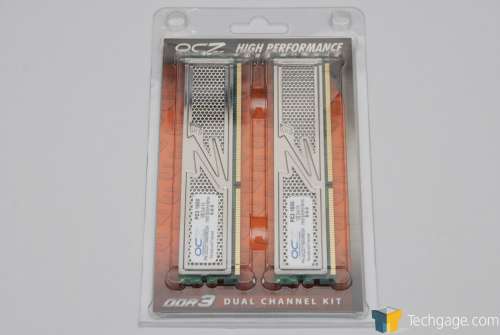 Today we have one of their latest kits on our test bench, a DDR3-1600 offering that includes Intel’s XMP support. If you are unsure what XMP is, you may want to check out our interview with Chris Cox, Sr. Staff Engineer for Intel’s Platform Memory Operations. Essentially, XMP is similar to NVIDIA’s EPP technology with DDR2, where special overclocked profiles are included in the SPD. This allows even the novice overclocker to go into the BIOS, set the active profile and reboot. Simple.

As hard as it is to believe (at least for me), it’s been well over two years since OCZ first launched their XTC heat-spreaders. These honeycomb-designed spreaders were designed to be light-weight, while offering plenty of room for airflow and heat dissipation. It’s a design that has grown on me over these few years, and I’ve come to appreciate their simple yet effective design. 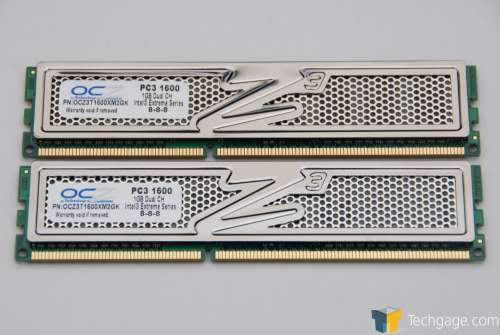 This particular kit uses the Titanium-colored heat-spreader, representing modules that are built with extreme stability in mind. In my past experience, this has also carried over into being a kit that’s not ideal for overclocking, but we’ll see how this one goes on the next page. 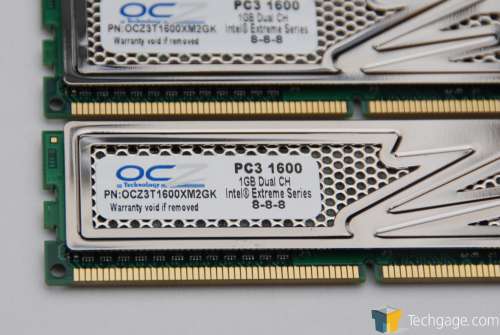 In line with other performance DDR3-1600 kits on the market, this one utilizes stock timings of 8-8-8-28 at 1.8v. High timings in the memory scheme of things, but not bad for DDR3. But no worries, that’s where XMP comes into play, and if you have an X38 or X48 board in hand, the modules have the ability to utilize a second profile that improves on these latencies. We’ll talk more about that on the following page.