Hot on the heels of our Vertex 3 review, OCZ Technology is back with the promise of an even faster drive, the Vertex 3 Max IOPS. Frankly, given the performance of the Vertex 3 it is hard to fathom that OCZ could so quickly fine-tune that powerhouse of a drive to find more untapped performance to release, but that is the claim.

Avid followers of solid-state drives may remember the original Vertex series, specifically the Vertex Turbo. The Turbo took the same Indilinx Barefoot controller found in the Vertex and overclocked it slightly to boost drive performance, although otherwise the drives were physically identical to one another.

The Vertex 3 Max IOPS promises a tangible boost to IOPS performance over the already blazingly fast Vertex 3, but unlike the Vertex Turbo there is no overclocking or simple firmware tweaking behind the Max IOPS. OCZ’s Vertex 3 Max IOPS is an altogether different beast under the hood. Of course the SF-2281 SandForce controller is still present and unchanged. But instead of 25nm Intel NAND chips, inside users will find 34nm Toshiba flash memory. 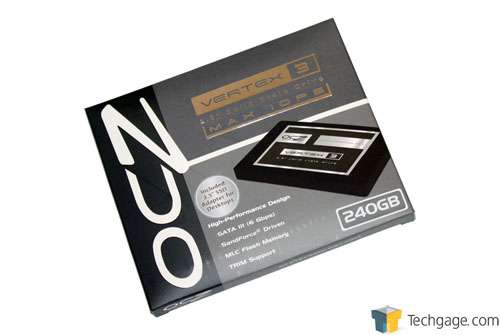 This has two notable impacts on the drive worth mentioning. Firstly, it allowed OCZ to include a greater number of smaller 4GB NAND (the Vertex 3 uses 8GB 25nm NAND), which combined with the necessary tweaking to the firmware allowed OCZ to increase overall drive performance. Remember that NAND is still the limiting factor in SSD performance, so by having double the number of stacked NAND die means more read and write requests can be taking place concurrently.

This is where the Max IOPS appears to gain its additional performance from, and also explains why the 240GB drive receives a lower boost in IOPS versus the 120GB model, because the 240GB Vertex 3 had already doubled the number of NAND die over its smaller 120GB relative. (This is also why, as a general rule of thumb, that larger capacity SSDs tend to offer higher levels of performance.)

The second impact worth noting doesn’t actually affect performance, but rather durability. Due to the nature of shrinking NAND, 25nm NAND inherently has a lower write tolerance compared to 34nm NAND, just as 34nm did compared to NAND at the 50nm node. Is it something to be concerned about? Definitely not, but for those consumers that are planning to still be using the same SSD four or five years from now, it is a difference worth noting.

Just as with the Vertex 3, the Max IOPS version features the same SF-2281 controller, custom OCZ PCB, and SATA 6Gbps interface packed into a small 2.5″ form factor. Interestingly, while our Vertex 3 had a cosmetic issue with the plastic housing, the plastic on our Max IOPS sample was flush to the metal case. On the flipside however, there were quite number of air bubbles in the sticker. Given the SSD will be relegated to sitting in a drive bay collecting dust, neither are more than a cosmetic quibble, but we would still prefer to see all the minor details ironed out on a flagship product. 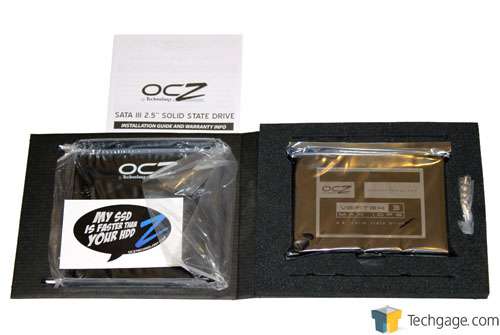 And again just like the V3, the Max IOPS ships in a deceptively small package which includes the mounting screws, 3.5″ bay adapter, and a cute sticker. The 3.5″ bracket is a single solid piece of steel, which also happens to serve double-duty as a layer of armor plating during shipping.