For over a year now, I have been using a smartphone in some form or another. It started with our evaluation of Palm’s popular Treo 700w that worked on the Windows Mobile 5.0 platform. In our review, we found the device more than capable to meet our expectations and we could appreciate the familiarity of working in a Windows environment.

As the product line evolved, and all successful lines do, it was only a matter of time before the next version of the Treo was announced. We saw such a device at last year’s CES when Palm was showing off their then new Palm Treo 750.

Originally released by Cingular all the way back in January of 2007, the 750 continues to be an excellent choice for mobile users who don’t necessarily want to lug around a notebook to do simple tasks like checking their email. Taking the design of the Treo 680, the 750 offers a far friendlier shape and styling than that of the 700w that we looked at a little over a year ago.

Keeping many of the features that we loved about the 750, as well as a few that we would have liked to have seen changed, the Treo 750 at first glance, appears to be a worthy upgrade in the immensely popular 700 series.

As we get into the testing of the phone, we’ll take a look at all the highs and lows that we encountered in our time with the device. Having used the 750 for a couple of months, testing of the smartphone was done in a real world environment, used for quick email messaging, phone conversations and simple multimedia uses such as music and video on the go. Please note though, we received our 750 months ago, prior to Windows Mobile 6 being shipped with the device. Therefore, all of our testing has been done with Windows Mobile 5.

With that said, let’s get down to business.

As we mentioned earlier, the 750 shares is chassis with the Treo 680. Both of these smartphones are smaller and lighter than the previous Windows Mobile Treo, the 700w. With its internal antennae, even looks more compact from a distance and fits quite nicely in any pants or coat pocket you might have. Taking a tour around the 750 itself, the business like nature of the device clearly comes through. With its non glossy surface, the 750 won’t win any beauty contests but for me personally, I appreciate this approach.

On the front of the 750, we can see that little design differences can be found between the 700w and the current 750. There is a 240×240 pixel LCD touch screen powered by a 300 MHz Samsung developed processor. Under the smaller than we would like to see screen, there is a full QWERTY keypad and a 5 way directional pad. 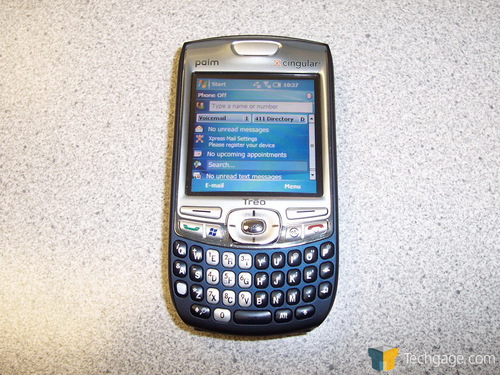 Turning the phone over, there is little out of the ordinary. At the top, there is a large speaker for speaker phone conversations, a 1.3 mp camera and a small viewing mirror for those of you who love to take silly pictures of yourself.

Located in the top left hand corner of the phone is the stylus. Palm has done a good job of keeping the lines of the stylus area smooth as to not catch it on your pants when pulling it out of your pocket but with enough groove to allow even the most habitual nail-biter easy access to the stick. 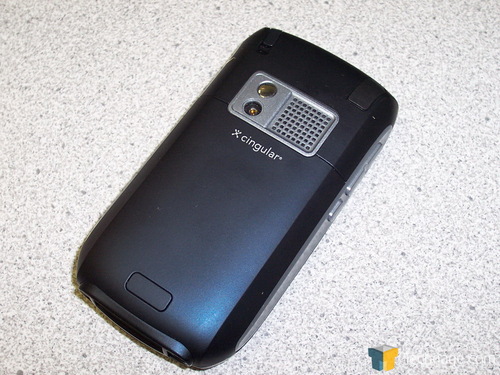 Running down the left hand side of the Treo are three buttons to control system volume and voice functions. These buttons are easily distinguishable as they are raised slightly above the side of the phone.

On the next page, we’ll look at more of the Treo 750’s features.