When Intel released its first-ever six-core (or hexa-core) processor in early March, we already knew at the time that it wouldn’t be too long before AMD hit the scene with its own six-core models. This was reassuring, because as things have gone for AMD on the CPU side lately, it’s been hard to predict just how far the company could fall behind the “Sponsors of Tomorrow”.

It’s one thing to match Intel with a six-core product, but it’s another to deliver the same kind of performance. Based off of what we’ve seen with Phenom II models up to this point, it was easy to surmise what kind of performance gains we’d see with an X6 chip. It’s clear that the performance won’t match up evenly, but AMD would certainly win from a value aspect.

That aspect is one thing AMD is highlighting pretty heavily with this launch. While Intel offers only a single six-core processor, the Core i7-980X Extreme Edition at $999, AMD states that you could save a lot of money by buying one of its processors and building a PC around it. Think about it for a moment. The X6 1090T is $299, an ATI Radeon HD 5870 is $399 and a sweet AM3 890FX motherboard is at most $199. That’s about $900… still less than Intel’s only six-core offering by itself.

Intel’s six-core aside, the fairest competition to the X6 1090T is the Core i7-930, a quad-core offering. While we don’t have that particular CPU model here (we have the slightly slower i7-920), it will be interesting to see how the two match up. Can Intel’s quad-core with HyperThreading beat AMD’s six-core without? That’s the big question. 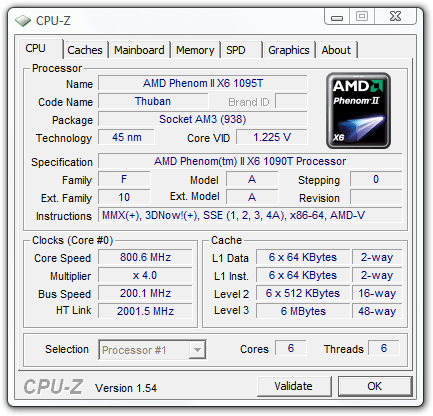 There’s a lot more to AMD’s X6 launch models than the fact that each include six cores, though, as these “Thuban” parts also introduce the company’s implementation of Turbo, called Turbo CORE. Like Intel’s version, AMD’s overclocks individual cores if an extra boost is required. On the 1090T in particular, three of the cores can be ramped up to 3.60GHz each if need be (that equates to a +400MHz boost * 3).

Thuban models aren’t much different from Deneb (X4) Phenom II’s, with Turbo CORE being the big addition. The CPU’s still have 6MB of L3 Cache, 512KB L2 Cache per core, and 4000MHz HyperTransport speeds. They’re also built on the same 45nm process, and despite the extra cores, the rated TDP still sits at 125W (Intel’s Core i7-980X is rated at 130W).

Before we jump ahead, it’s always interesting to take an overview look of AMD’s current models so let’s not break tradition and do that here: