In May of 2005, both AMD and Intel delivered the world’s first desktop dual-core CPU’s, and since then, the processor technology and increase in performance from generation to generation has accelerated to mind-boggling levels. I’m not sure if it’s a sickness, but when I look back to the landscape just two years ago, I can’t help but feel a bit underwhelmed, because the newer models are so much more attractive.

It’s true though. The acceleration of technology is incredible, and it’s actually a bit hard to believe that just five years ago, we were all sporting single-core processors in our desktops. The first dual-core’s came in May of 2005 as mentioned, and a mere year-and-a-half later, Intel launched the first desktop quad-core offering, the QX6700.

So if it only took a year-and-a-half to make the shift from a dual-core to a quad-core, how on earth has it taken another 4.3 years to finally see the industry’s first six-core offering? The reason isn’t due to the fact that it couldn’t be done (I remember Intel talking about Octal-Cores at IDF 2007, and we still don’t see those on the desktop side), but rather because they haven’t been needed.

Just over two years ago, we took Intel’s Skulltrail platform for a spin. For those who may not recall, Skulltrail was Intel’s ultra-high-end solution for those who wanted the best in multi-tasking and the best in overall raw horsepower. As we learned in that article, the company certainly delivered. One thing we also learned, though, was that there was a dire need for better multi-threading support in our common applications, since we found it hard to actually push all of the eight cores we were given.

The multi-threaded situation is much improved as it stands today, and it’s constantly getting better. As we’ll see in our test results, even our real-world benchmarks that we’ve been using for the past year-and-a-half see good benefits with today’s multi-core processors, including the one we’ll be taking a look at today. 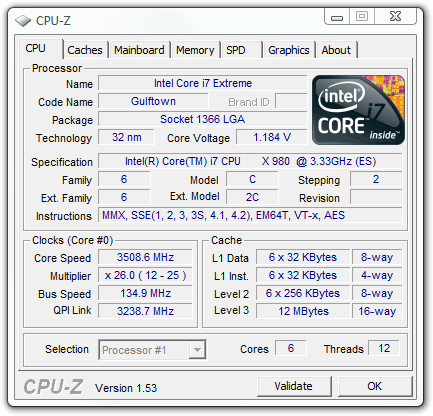 You might be saying to yourself, “A six-core? I can’t even push a quad-core!”, and to be honest, that’s what makes Gulftown so interesting and fun. I admit that didn’t expect much when I first sat down to benchmark the i7-980X, because I already had a good mindset of what I could expect to see. After all, the processor is quite similar to the i7-975, but with +50% the number of cores and threads. But, there’s just something about it… something about having so much power at your finger-tips that cause you to let out an evil laugh. Wait, is that just me?

It’s obvious that the i7-980X has a lot of muscle, but there’s more that makes the chip special than just the core/thread boost. For one, like the recently-released Clarkdale desktop processors, Gulftown (based on Westmere) is built upon a 32nm process. One thing that means less heat and less power consumption than previous architectures, and for proof, you don’t have to look further than our power consumption page.

In addition, there’s also the addition of the AES-NI instruction set, increased L3 Cache (12MB) and also the possibility of improved overclocking.

Before continuing, it’s worth taking a look at Intel’s current Core i line-up:

When I first learned of the Core i7-980X’s release, I was a bit worried of what the price could be. After all, it’s not unlike Intel to charge a sweet premium on its highest-end and special products. Just take a look at Skulltrail, where each CPU was 200MHz faster and $500 more expensive than the high-end QX9650. But, my skepticism was all for naught, and I couldn’t be happier about it.

Like all other top-end launches from Intel in recent memory, the Core i7-980X will give the i7-975 the boot and sell for $999 in sales of 1,000 (the retail price will be a bit more than this). Think about that for a second. Intel just replaced a quad-core with similar architecture with a six-core built on an improved process, is including a robust CPU cooler in the box, and then is selling it for the same price. This might be the first time when I’ve actually considered a $999 processor to be a deal.

Intel hasn’t officially admitted the fate of the i7-975, but it can be assumed that it’s simply going to be removed from the line-up in the near-future. As model names go, the company has pretty much painted itself into a corner, so unless it wants to rename it to the i7-967.5, we’re just going to see it go away. The i7-970 moniker is currently reserved for the next Gulftown variant, which will appear this fall.

That leads me to the next major point about Gulftown. When the i7-980X is officially released to market in the coming weeks, there will be a wide spread before the next follow-up model is released. As mentioned, that will be the i7-970, and we’ll see it this fall. Past that, I’m not quite sure when the next six-core model will hit. One would assume that Intel may release a lesser-expensive model early next year, but it’s really too early to speculate.

For those who are purchasing a Gulftown, the long stretch in the launch schedule is actually a good thing, because for the first time in a while, you can purchase one and have confidence that even later this year, your i7-980X will still rightfully be at the top of Intel’s food chain. It’s all made even more interesting because it’s also the first time in a while where a new processor model can’t simply be matched by an overclocker with a lesser model. Theoretically, for a quad-core to match the multi-threaded performance of this Gulftown at stock speeds, it would have to be overclocked to 5.0GHz. And that’s not even taking the other microarchitecture enhancements into consideration.

Yes, I think Gulftown owners will be pretty pleased about that.