It’s been an interesting 2017 for graphics cards so far, but not for the reasons most of us have been hoping. While we did see the release of NVIDIA’s biggest and baddest gamer GPU in the form of the GeForce GTX 1080 Ti, and also saw AMD update its Radeon Pro Duo, Vega has been MIA, with there still being no clear launch date (though rumor says an announcement should happen soon).

At the start of the year, it was assumed that Vega would arrive before the end of Q1, but that’s come and gone – we’re almost half-way through Q2 at this point. It does seem extremely likely that we’ll see it launch before the end of this quarter, though, as it’s a bit of a do-or-die situation for AMD. Ryzen’s success is taking care of the CPU side; it’d be nice to see the same thing on the GPU side.

This all makes the launch of the Radeon RX 500 series a bit odd, but in reality, it’s not odd at all. RX 500 is to RX 400 what R9 300 was to R9 200 – a clock boost, and not a viable upgrade path for those who own the older versions. AMD is keeping competitive the best way it can, and while it might seem strange to simply overclock a series and give it a new name, it has resulted in a slew of new GPU models to peruse and consider.

When the RX 400 series came out, it catered to mainstream audiences – the top-end RX 480 cost a mere $249 for a card bundling in 8GB of GDDR5. Because there haven’t been higher-end cards than that on the red side, a lot of NVIDIA’s lineup has remained uncontested. The hope is that Vega will change that situation, much like Ryzen did on the CPU side. RX 500, then, caters to the same audience that the RX 400 series did, leaving enthusiasts wanting to go higher-end (and AMD) to hold out for Vega.

If you’re in the market for a new GPU, and don’t plan on going high-end, RX 500 was made for you.

In addition to the RX 580 and 570, AMD sent along an RX 550, which we’re going to take a look at later (along with the RX 560). As you can see from the table above, this year’s models are not too different from last year’s – as mentioned before, this is a clock boost series, perfect for those needing a card now, but not for those who own the previous version of the respective card.

Because the RX 500 series is clocked higher than RX 400, it means that TDPs have experienced an unfortunate (but expected) boost, with a gain of 35W at the top-end.

Both cards we received come from PowerColor, which makes some of the best-looking models around (it’s hard to go wrong with red + black color schemes). Interestingly, the RX 580 version of the card has a simpler cooler than the RX 570, resulting in an odd situation where the lower-end card draws more power than the higher-end one, as we’ll see in the conclusion (three fans vs. two). 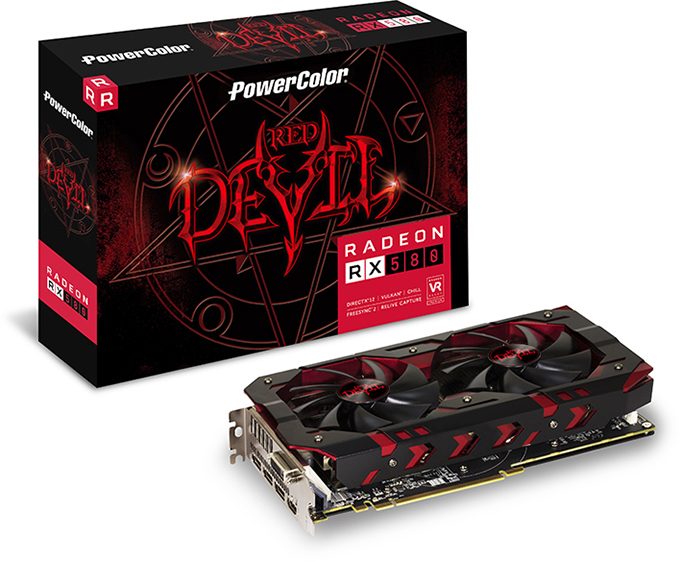 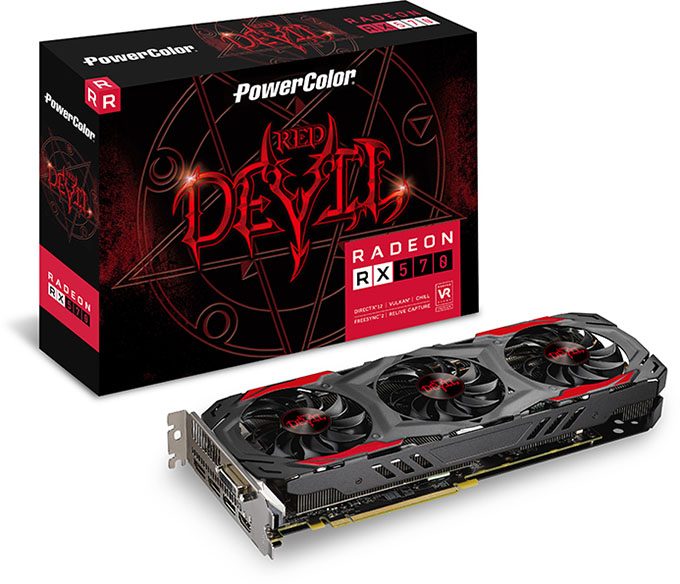 The RX 500 series isn’t the most revolutionary one we’ve seen released in a while (in case it hasn’t been obvious, it’s a clock-boosted RX 400 series), so by this point, you probably know exactly what to expect if you’ve been paying attention to the GPU market over the past year. So, we’ll jump right into testing, for the final time using this particular suite.

My intention was to test the RX 480 again using the same driver as the RX 580, but after testing, I realized that Windows must have stepped in and replaced that driver with an older one. Both the RX 580 and 570 were tested with the exact same driver – it didn’t need to be reinstalled. When I installed the RX 480, which came right after the 570, it booted up fine with the driver already installed, so I went on my merry testing way.

Unfortunately, despite how seamless Windows made it look, that launch driver apparently didn’t support the RX 480, so Windows stepped in and replaced the driver with the most recent one in Windows Update. Because the RX 480 was being retested just for interest’s sake (I wouldn’t recommend people buy it now that the RX 580 series is out, unless it’s a great deal), I decided to stick with those results.

For this reason, the results of the RX 480 might not be 100% identical to the performance of the current driver, but the driver used still encompasses over half a year worth of updates, which gave it an obvious boost in most tests. The current driver might add a touch of performance, but nothing grand.

That all said, framerate information for all tests – with the exception of certain time demos and DirectX 12 tests – are recorded with the help of Fraps. For tests where Fraps use is not ideal, I use the game’s built-in test (the only option for DX12 titles right now). In the past, I’ve tweaked the Windows OS as much as possible to rule out test variations, but over time, such optimizations have proven fruitless. As a result, the Windows 10 installation I use is about as stock as possible, with minor modifications to suit personal preferences.

In all, I use 8 different games for regular game testing, and 3 for DirectX 12 testing. That’s in addition to the use of three synthetic benchmarks. Because some games are sponsored, the list below helps oust potential bias in our testing.