With the recent announcement of Google’s Chrome OS, open source zealots everywhere have been licking their lips raw and playing their trumpets loud. But is another big corporation going to be a good thing for OSS? We take a trip down memory lane and look for whether Google can (or wants to) buck the old trends.

Well, it’s finally here. In a nearly “Christmas in July” announcement, Google pulled the cloak off of its new Chrome OS project. I’ll pause a minute while the two of you who haven’t heard the news utter your gasps: “Really? Google is going to make an OS? Whuddathunk?!” Of course, we aren’t going to see it for quite some time, but the “when” really isn’t the important part – it’s much more about the “what.”

Chrome OS is going to be a netbook incarnation at first, which is really a smart move given the recent deluge of them. Rob may not be the world’s biggest fan, but I’ve been hard-pressed not to click “Buy” on the Eee 1005 that I keep lusting over at Newegg.

Several people, myself included, don’t really have a need for a desktop as much – despite my love of all things computer-based, I haven’t had mine assembled for two years. In its place are several smaller interconnected systems including a home server, HTPC, and my MacBook Pro. A netbook, particularly with a shiny and functional OS, would be a great addition to the lineup.

What I find most interesting about the Chrome OS project is its license – Google promises that the OS will be open-source and built from Linux. Normally, this would be cause for celebration – part of what I love about Mac OS X is its Unix roots, and nobody has the time or resources to develop a user-based OS quite like Google. But the more I’ve thought about it over the last week, the more sour a taste I’ve had in my mouth. 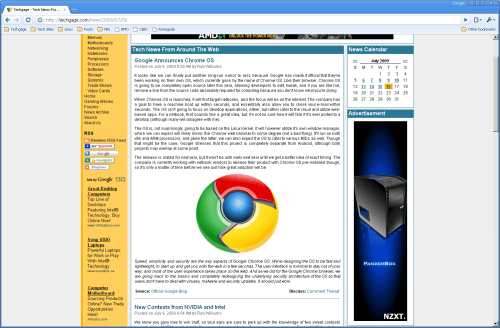 Historically, the open-source community has embraced corporations daring to dip toes in the water with open arms. For instance, when NVIDIA and AMD (then ATI) released proper graphics drivers for the Linux platform, it made “modern” gaming a possibility on Linux. The catch, of course, was that the drivers themselves needed to be closed-source – understandable, really, since proprietary information was contained within them. But for the first time, a real push against a founding principle of Linus Torvalds – freedom to examine – was felt. Sure, closed-source software had come and gone before on Linux, but it was always a simple program (for which there were almost always several alternatives), not a key part of your system.

The same can be said for much of Apple’s OS X. It’s based on Unix (which was never really free) so I suppose that we can split hairs here for those inclined to disagree. But much of what’s been written into OS X is indeed GPL open-source software, such as X11 rendering the desktop. Despite this, Apple turns over its modifications several years after making them, securing its market first. Part of this is protection of “trade secrets,” but at what point do we say that software stops being open-source and starts becoming controlled by a company? A huge part of the license was written that modified code should be freely distributed. Of course, Apple gets around this by simply putting in references to modules and pass-through drivers that it writes as proprietary – making a close look at Darwin’s X11 just about useless.

Finally, we get to the battle that even non-Linux users have some passing familiarity with – Mono. For those of you who need a recap (trust me, you know this even if you don’t know the specific names), Mono is the name of the open-sourced .NET framework on Linux. Doesn’t ring a bell? Perhaps you’ll recall when Microsoft sued Novell (the project leader) for its inclusion in SUSE Linux.

I’ll cut right to the chase – Microsoft came to an “agreement” with Novell that said it won’t sue either Novell or SUSE end users (yes, that was included) for now in regard to the various license and patent infringements for even having something that could execute .NET code. With MS granting an indefinite easement, Mono has now gone on to become standard in Ubuntu, Debian, SUSE and Fedora and is even built into GNOME and KDE now. At any time, Microsoft has the legal right to yank the easement and demand royalties or a cease and desist. 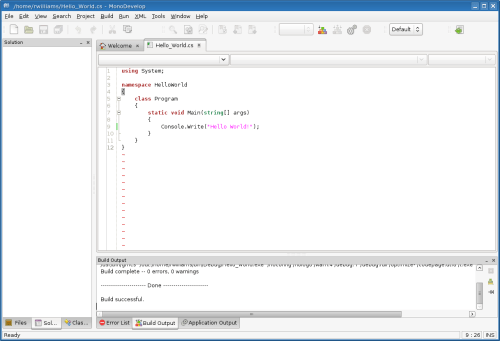 This wraps up our history lesson – three different forays into open-source waters, three entirely different ways to close off the company’s ideas. One was respectful and understandable, one is sneaky and one is a very literal trojan horse. Microsoft may never pull the trigger, but it could at any time. Which brings us to the hot topic of the hour – Google.

It seems that for as many people as you ask about Google, there are somehow as many different thoughts on the company and ten more. Ideas fluctuate from savior to devil and the entire gamut between. Even among the Techgage staff, we’re pretty divided on where we stand – some of us (myself included) think the company is on the up-and-up, others think it’s got too much information at its disposal – and in the information age, that translates to power. Search histories, usage histories, demographics, data, data, data… our entire virtual lives are archived in the company’s server vault.

Now, despite being a privacy freak, this really isn’t such a threat to me – depending on how Google treats the licenses it takes on. If, unlike previous companies, Google releases its OS entirely into the open-source wilds (and maybe contributes a bit to the foundations? It’d be nice!) so that we can examine its data-mining and feel comfortable that its reports back to big-brother are anonymous and safe, I say this is a good thing. User feedback is often overlooked by the actual user, who always has some lame excuse as to why he or she can’t bother to fill out a survey or registration but then bitches and whines that the next version doesn’t fix the huge problem he or she encountered. Usage data translates into research data which translates into better products for us all and better marketing for those products, hopefully to more accurately chosen potential buyers. I really don’t see a downside.

However, should Google choose to take the road more traveled, there is indeed something to be feared. If we can’t see what the additions are doing, the OS needs to be declared insecure right from the start. “Usage Statistics” could be anything from spidering your entire hard drive to being a zombie for kiddie-porn or spam bots. A simple “Click ‘No!’ to opt-out” hidden in the bottom of the fifth paragraph of the seventeenth sub-clause of the EULA is not sufficient, and to build it on the back of something founded in freedom and transparency would be downright insulting. Knowing our luck, half of it would end up being programmed in Mono.

It would be great if we were able to just welcome this with open arms, but us Penguin-heads have been burned too many times in the past to just welcome our new benefactors. I guess we’ll have to wait until it hits Beta (almost perpetually, like G-mail perhaps?) before we find out whether Google’s entry into the OS world is truly open-source or just a broken promise plated in chrome.