If you have ever visited our little corner of the ‘net, I feel safe in assuming that you are one of two things. Either you’re a fan of everything computer related, or, you’re flat out lost. Regardless of which category you fall under, we appreciate your patronage and hope that you see something that might bring you to the decision that you’ll return.

If you happen to fall into that first group and actually came to the site under your own free will, I am sticking with my assumption that you’re somewhat of a tech head in one regard or another. If you’re like me, being a “computer guy” means that in your circle of friends and family, you are asked a lot of computer related questions.

While I tend not to not shy away from helping anybody that might legitimately need it, my time is often spent fixing printers or explaining to people that a certain degree of common sense has to be used when navigating the often treacherous open seas that we call the internet. When simple advice is all that is requested, regardless of what the subject matter might be, I can’t stress enough to people that some form of a backup plan is absolutely critical if there is anything of value stored on the PC in question.

For those that heed my warnings, a quick rundown of the various ways to back data up their personal data is usually what follows. From simple CD-R/W backups to backups over their home network or online, a backup plan cannot be overlooked. For students it’s assignments and for many others it’s a digital photo album filled with a lifetime of memories. But regardless of what you hold near and dear to you in binary form, if your PC one day decides to give up the ghost, you and your precious data are hosed. That my friends, absolutely sucks. 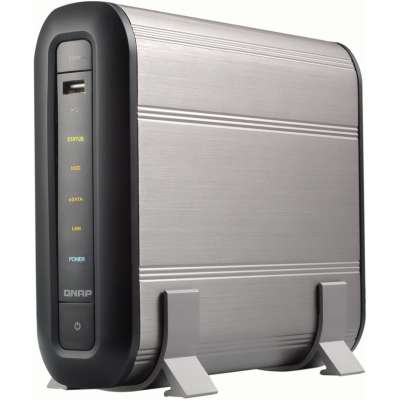 While a simple CD-R (or a few) can solve most people’s backup needs, there are those that have many, many gigabytes of data that can make a CD or DVD backup an absolute nightmare. There are also those who have multiple computers in their home. Those with families more often than not fall into this category. Do you want to get hands on with each and every PC on your network? No a chance. This is where a network attached storage device comes in quite handy.

We have looked at many different NAS devices here at Techgage from many different vendors. Companies like Thecus, Vantec, D-Link and Synology have all been kind enough to provide us with test hardware and being able to provide you, or readers, with performance information on these products has benefited Techgage greatly.

When we posted our review of the Synology DS207 last year, I got quite a few emails asking about QNAP, a large player in the NAS market and how their products compared to those that we have evaluated in the past. This prompted us to get in touch with QNAP and the fruits of those emails and phone calls resulted in their immensely popular single drive NAS box, the TS-109 Pro showing up in our labs.

Having reviewed the Synology DS107e not too long ago, we had an idea of what to expect from the single drive TS-109 Pro but from the get go, there was simply no comparison as the markets that each product is being marketed to couldn’t be any more different.

QNAP is positioning the TS-109 Pro to be sold to those who might use the device in an office setting as a central storage hub that can be rolled out into production in little or no time at all. With support for active directory authentication, a powerful 500 MHz Marvell 5182 CPU and 128MB of DDR2 memory, the TS-109 Pro is a giant on paper.

In addition, by supporting up to a 1 TB SATA II drive, the TS-109 Pro can offer a lot of storage in a small compact package, saving the network administrator rack space as well and money by eliminating the need for a standalone file server as well as using a faction of the energy of said server. The TS-109 Pro appears to be a winner but sometimes looks can be deceiving so let’s get into our testing and see what we can turn up.