Complementing this month’s SIGGRAPH conference in Los Angeles, NVIDIA released a unique GeForce driver for its TITAN Xp graphics card, uncapping performance in tools “like Maya”. As we found out, this driver improves performance with a lot more than just Maya, helping TITAN Xp intrude on Quadro’s performance territory more than just a little bit.

Complementing the latest iteration of SIGGRAPH, which was held this past week in Los Angeles, both AMD and NVIDIA released new graphics drivers that both bolster performance and add some new features to the mix. Since performance perks have been touted, I thought I’d take a quick look at how these promises translate to a couple of benchmarks.

It’s not too often that either AMD or NVIDIA namedrop Autodesk’s Maya, as 3ds Max tends to get the lion’s share of the limelight, but recently, both companies have singled it out, as if new optimizations became mission critical for both companies at the same time.

In a blog post talking about the new driver, NVIDIA’s Matt Wuebbling writes, “Our latest driver – available today – delivers 3x more performance in applications like Maya to help you create and design faster than ever.” Here’s the interesting thing: he’s not talking about a Quadro driver, but instead a driver for NVIDIA’s top-end GeForce card, TITAN Xp. 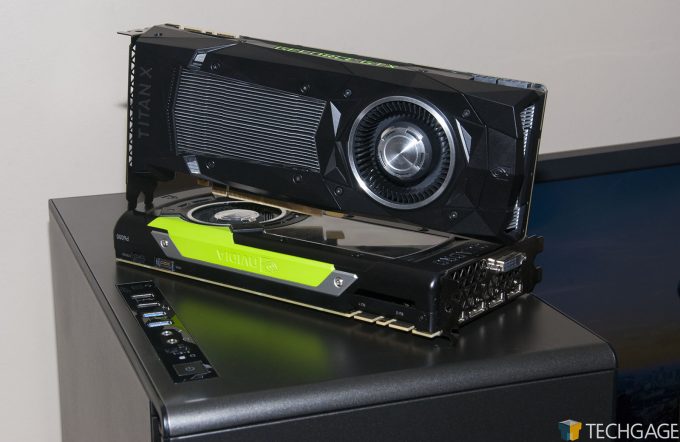 TITAN Xp roughhousing has increased since news of the new driver

Before diving into performance, it’d help to explain these drivers a bit better, because some important facts about each eluded me at first. First off, AMD’s Radeon Pro 17.Q3 Enterprise driver becomes the third of four supremely stable releases of 2017, and as expected, “improved performance” is a bullet-point. As the quick tests on this page will suggest, though, something’s amiss.

Looking back at the slide deck (seen below), all of the enhancements mentioned had to do with AMD’s upcoming WX Vega series, which includes the brand-new top-end WX 9100, as well as the NAND-infused SSG. If there are performance optimizations for Polaris in this driver, they’re not made evident in these particular tests. 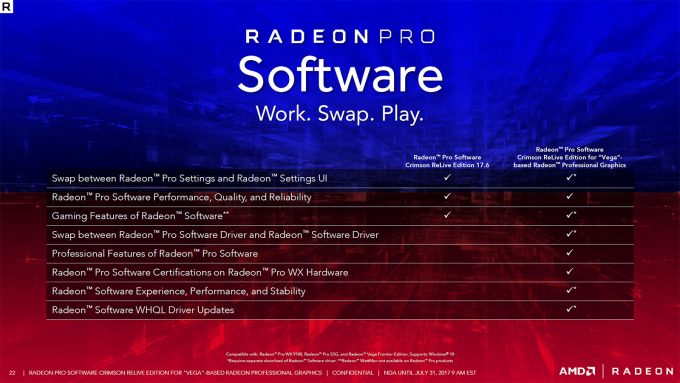 AMD’s latest driver focuses its optimizations on Vega, not Polaris

NVIDIA’s 385.12 driver is the more interesting of the two, as NVIDIA has uncapped certain performance angles on TITAN Xp to give it the same kind of boosts Quadros enjoy – but as mentioned, it’s just “certain” workloads that have experienced a benefit, and those will be covered in the charts below.

Something that might be considered a little misleading is the fact that the same driver that enhances TITAN Xp performance is the same one any GeForce gamer will go and snag right now, since it’s the latest, and it supports the typical stack. Despite that wide support, though, these particular optimizations are exclusive to TITAN Xp. I performed a quick before / after test with a GeForce GTX 1060, and no gains were exhibited.

The star of the show in this article is the TITAN Xp, but since I had completed all of the testing for the Radeon Pro WX 7100, I decided to include its performance anyway, for interest’s sake. As always, all tests were performed twice over for accuracy, and at no point during testing any of these five configurations was a third run warranted due to a big performance gap between runs.

Our test system is run at stock configuration, with the memory kit’s XMP profile enabled, a change that fortunately doesn’t affect the CPU’s clock.

For both the WX 7100 and TITAN Xp, I used the new driver in addition to the previous release. The Quadro P6000 has been included for the sake of completeness. It’s the Quadro equivalent of the TITAN Xp, with the same number of cores, more memory (24GB ECC vs. 12GB non-ECC), but at a slightly lower clock. Here are the test rig’s full specs:

Because Maya had been namedropped by both AMD and NVIDIA, I figured it’d be a good reason to use SPECviewperf, which includes a Maya test, as well as SPECapc, which uses Maya 2012 (a 2017 benchmark is due out in a few months). Knowing that the TITAN Xp driver was supposed to boost applications “like” Maya, I admit I didn’t expect to see this: 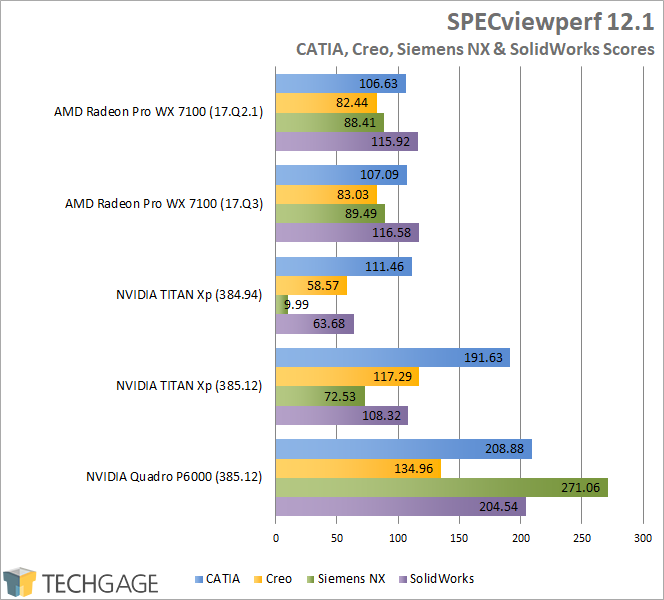 Here we have four high-end CAD suites, all having seen a major performance uplift from one driver to the next. The results are almost unbelievable; the Siemens NX test grew sevenfold! This kind of free performance is almost unheard of, but we can see that compared to the proper Quadro, TITAN Xp still falls behind in varying degrees. SolidWorks in particular sees almost doubled performance over the TITAN Xp in SolidWorks on Quadro P6000.

The above graph covers all of the CAD suites in SPECviewperf, while the one below tackles regular 3D design suites, as well as some scientific tests. 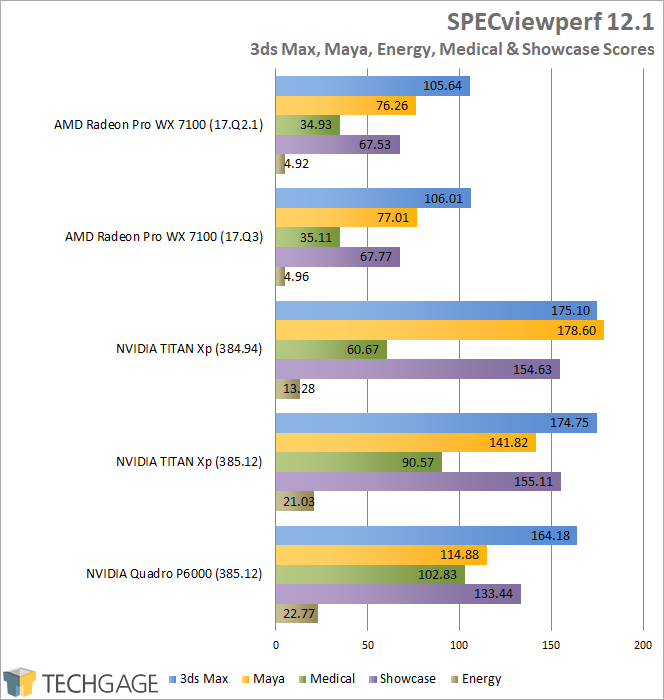 A definitive performance uplift was seen with the CAD suites, but with these other ones, the TITAN Xp and P6000 trade punches, and in some cases, performance doesn’t change at all. Interestingly, the Maya test has seen a decrease of performance here with the new driver, which flies in the face of NVIDIA’s promises (but wait, there’s more!). Even more interestingly, the P6000 ranks lower than the TITAN Xp’s performance at its worst. A real oddity.

The Maya situation changes once we look to SPECapc, which measures the performance of an average Maya workflow, whereas SPECviewperf only tests its viewport performance. While viewport performance went down on this driver, the overall boost on TITAN Xp with the new driver is incredible, putting it on par with the P6000: 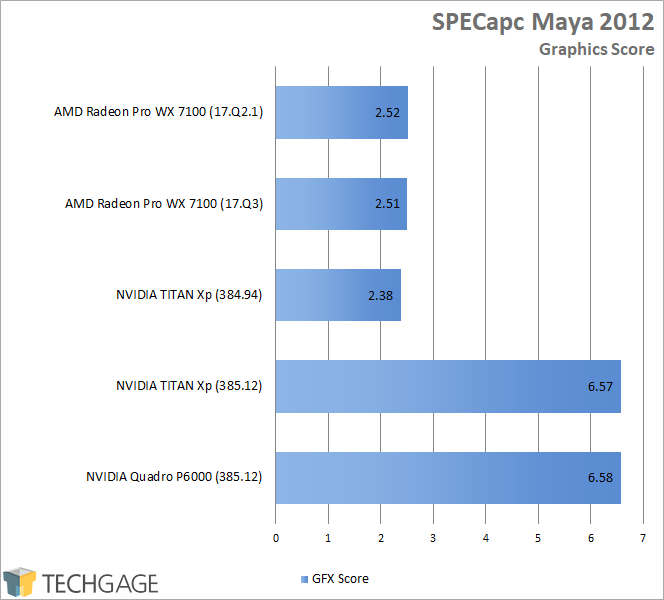 I’m not sure why there’s such a performance disparity between these two tests, but their age could have something to do with it. SPECapc is obviously based on Maya 2012, whereas the test included in viewperf is based on Maya 2013. As mentioned earlier, SPEC is due to have a brand-new Maya benchmark released soon, based on the 2017 version, which I’ll get down to testing as soon as it’s available.

Taking the performance numbers above, and converting them to percentages, just how well did NVIDIA do with its new TITAN Xp driver? I’d wager “well”:

In a way, I am really surprised that NVIDIA has uncapped some of the performance on TITAN Xp as it has, as it brings the card more towards Quadro levels of optimization, though the equal-spec’d P6000 still leaped ahead in the most crucial high-end CAD tests. For those who work with such tools but don’t require the perks Quadro brings (premium customer support, further optimizations), TITAN Xp should now look like an amazing value.

At present, the TITAN Xp can be found at Amazon for an inflated price ($1,649 as of the time of writing), or you could go straight to the source and snatch it for its retail price of $1,200 (good guy, NVIDIA). The Quadro P6000 currently retails for its SRP of $5,000 on Amazon. AMD’s Radeon Pro WX 7100, which performed very well in certain tests (Siemens NX, especially) against the TITAN Xp, can be had for $620. 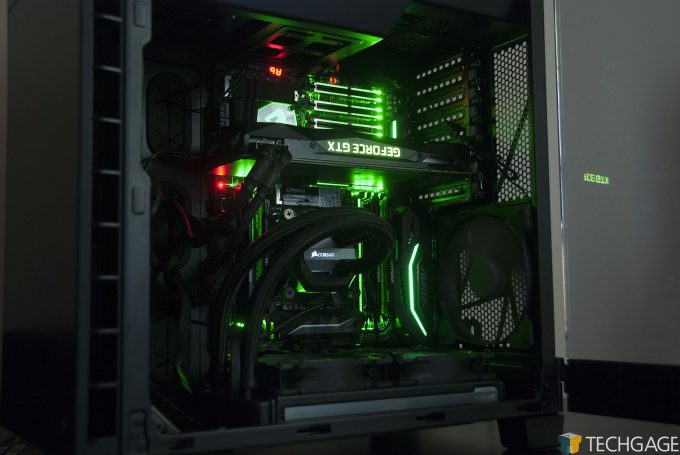 With NVIDIA uncapping performance on TITAN Xp as it has, it’s going to be very interesting to see how AMD’s upcoming Radeon Pro WX 9100 fares in benchmarks (which should be quite well, as it’s close to being equivalent to dual WX 7100s on paper).

I should also note that it could be that TITAN Xp could also see gains in other benchmarks, but for the sake of time, I left the testing at these two benchmarks. I will however be benchmarking the TITAN Xp soon for our regular WS GPU suite, so at some point in the near-future, the answer to that question will be better understood.