While RX Vega and Threadripper take most of the limelight for high-end desktops and gaming, SIGGRAPH is about workstations too, the content creators and people behind what makes gaming possible. For professionals, AMD had two new workstation cards unveiled, both are Vega-based to complement the Vega FE launch. The WX 9100 is the top-end pro card that doubles the performance of the WX 7100, but there is a brand new card on the block. When we say brand new, we really do mean that, as it’s a concept card come to fruition, the SSG.

The WX 9100 is the top-dog of the workstation series of AMD’s professional line, but should not be confused with the Vega FE. While the specifications are similar, the two cards are for different markets. Vega FE is more in line with NVIDIA’s Titan Xp (in terms of market), while the WX 9100 is more in line with the Quadro P5000. Vega FE is cheaper and more powerful than the WX 9100, but it lacks most of the extended software acceleration, such as Siemens NX, Creo, Solidworks, Revit, etc, offered by the enhanced Pro drivers. 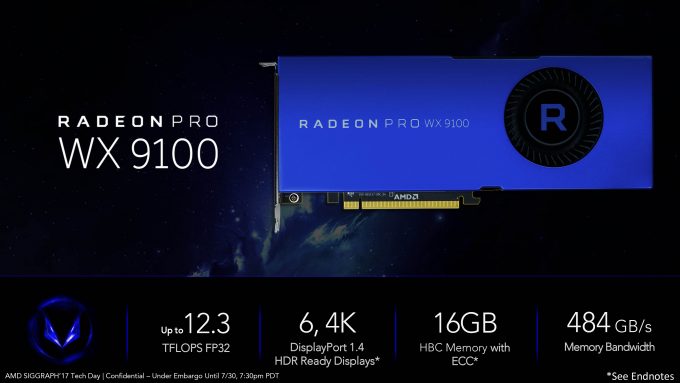 You can see in the chart below how similar the specs are between the two cards, with the clock speed increase accounting for the extra 0.8 TFLOPS of compute between the two, but with the Vega FE being $1000, and the WX 9100 at $2200. It should go without saying that you should know your workload before picking a professional card. However, there is a new and mysterious entry into the pro line-up that’ll leave many scratching their heads, the SSG.

AMD announced the SSG concept last year at SIGGRAPH, and it involved an RX 480 with a 1TB SSD bolted onto the card. SSG stands for Solid State Graphics, and the idea was to fit an SSD directly to the graphics card. In this system, data that needs to be fetched from storage doesn’t need to go through the CPU, chipset, and then storage controller, eliminating a large chunk of latency. The end result was that a very mid-range GPU could debayer uncompressed 8K video in real-time; for those that don’t know, 8K video can be a rather obscene 1GB per second, and debayering takes 3 filtered frames of red, green and blue combined into a single full color frame – in short, that is a huge amount of data that needs to be processed. 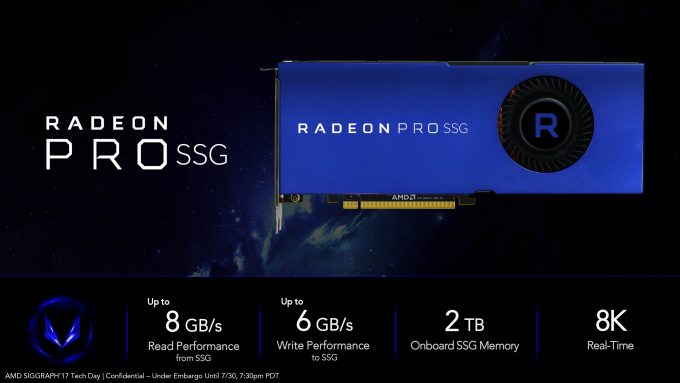 While the original card was a concept, there was clearly interest, as not only did AMD make the card a reality, it swapped out the RX 480 for a Vega chip, and gave it 2TB of NVMe SSD to play with. The price though, will be hard to swallow, as you’ll be paying $7000 for the card, which is effectively $2200 for the WX 9100 and $4800 for 2TB of storage. To be fair, this is a steal compared to the $10,000 price of the concept cards.

The SSG is a very new and unique concept, and something that has very niche appeal at this time. The huge price isn’t unexpected either, as the amount of time it could save with certain video projects will be immense, plus, there is nothing else like it on the market. AMD previously mentioned large CAD projects going from 20 minutes load time down to just a single minute by using the SSG. There are numerous circumstances that an SSD bolted to a GPU could save huge amounts of time for very large data assets, but at this stage, it will have limited appeal. It will take time for the concept to play out, but AMD clearly has a product that people are after, otherwise the concept card wouldn’t have played out into a full product. 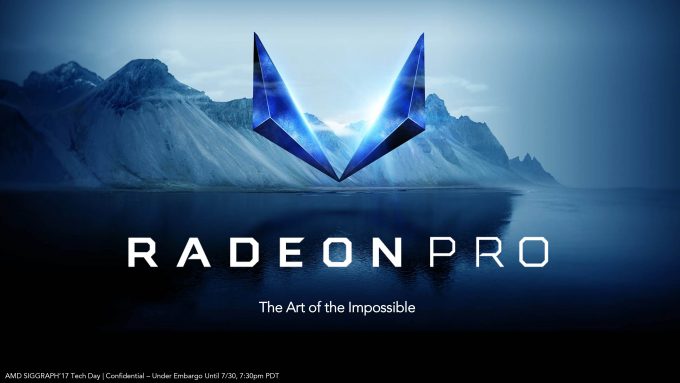 The SSG will soon have built-in support from one of the biggest 8K content management systems going, Adobe, with After Effects and Premiere Pro integration, so you won’t need to worry about some third-party package or process to put your video through before processing. 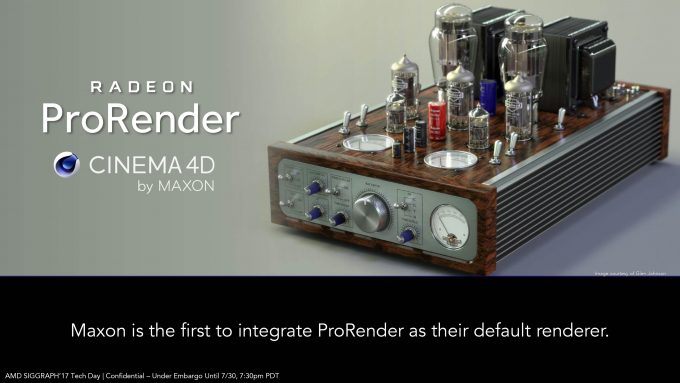 While the two new workstations GPUs took center stage, there is still a lot of other technology, mostly on the software of things that goes behind such products. AMD was constantly bringing up 8K content creation, not just from a display output, but also processing. On the rendering side, AMD’s ProRender engine will become the default engine behind Maxon’s Cinema 4D package. ProRender can be best explained as AMD’s equivalent to NVIDIA’s Iray render engine, a physical-based iterative rendering engine, but instead of using CUDA, ProRender uses OpenCL. This means both AMD and NVIDIA GPUs can use ProRender, while only NVIDIA can use Iray.

There is still a lot going on with SIGGRAPH, but AMD certainly has bolstered its position in the workstation scene, not just with the Vega-based WX 9100, and the very unique SSG, but also with Threadripper; who doesn’t want a 16-core CPU with 64 PCIe lanes for plugging in 4x GPUs to do some rather extreme rendering.