It doesn’t seem like there’s much room for a dull moment at AMD nowadays, as the company continues to ride the wave of its resurgence in both the CPU and GPU markets. When the company released its first RDNA GPUs in 2019, there was a lot to like, both with performance and features. With RDNA2, which graces the Radeon Pros we’ll be taking a look at here, the company managed to impress us more than we expected.

With RDNA2, AMD delivers performance to allow it to be competitive at the top-end of the market, and adds support for valuable features like resizable BAR, variable rate shading, and hardware ray tracing – all of which can be great for both working and gaming. 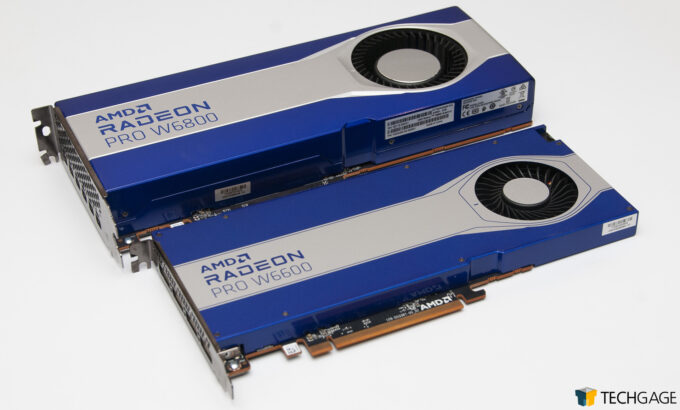 If its price and performance level isn’t enough to explain itself, the Radeon Pro W6800 is best-suited for those who don’t want to be held back by anything – memory limits, or even memory errors. If you want ECC (Error Correction Code) memory, the W6800 will be your go-to on the Radeon side. Neither of the two Radeon Pros from the previous RDNA generation offered ECC, so it’s good to see an option return.

For those with more modest needs, especially those working mostly with CAD, or just want a stable workstation, there’s the low-power single-slot 8GB Radeon Pro W6600. 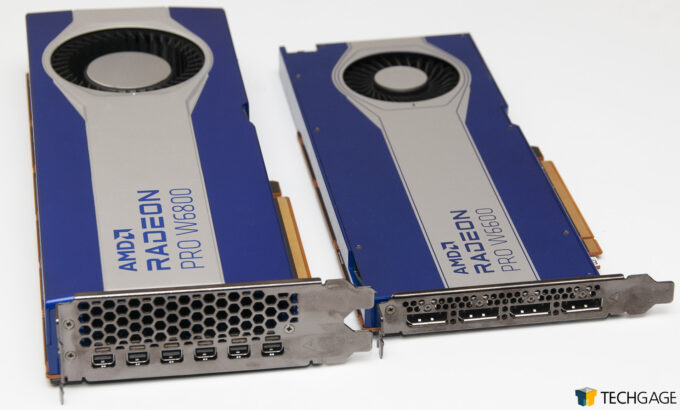 With the release of PCIe 4.0, AMD saw an opportunity to enable resizable BAR support on its RDNA2 cards, letting certain workloads to send data more efficiently between GPU and CPU to enable a performance uplift. Not too long after AMD introduced its reBAR support, or Smart Access Memory in its terms, NVIDIA followed suit, and so will Intel with its upcoming Arc-series GPUs. 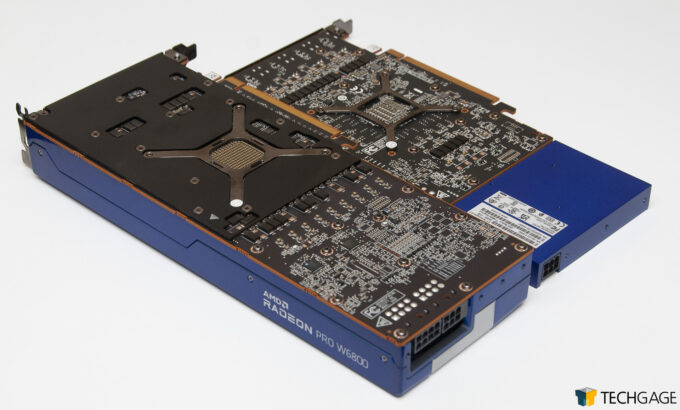 AMD has so far released seven different models in its gaming-focused Radeon lineup, so as it stands today, there will be obvious gaps that could be filled in AMD’s current-gen Radeon Pro lineup. Whether or not the company will augment the series with additional models is unknown. We only saw two models in the previous-gen Radeon Pro lineup, as well, so AMD may believe the bases are well covered here.

It’s important to note that the feature set of the Radeon Pro series goes beyond regular Radeon, as you would expect with a different market focus. Most notable is strong support for using a remote workstation, but also noteworthy is the completely overhauled Radeon Pro Software suite that allows you to access every aspect of your GPU quickly and intuitively:

Considering the lack of a call-out in the earlier specs table, it probably won’t surprise you that neither of the new Radeon Pro models deliver strong double-precision (FP64) performance. The focus of the Radeon Pro series is more on creation and design than scientific or financial computation, so there are better-suited models out there if those workloads are important to you. In early 2020, AMD delivered such a solution with its Radeon Pro VII. Its high-end Instinct compute cards likewise have uncapped FP64.

Our system as tested:

Our benchmark results are categorized and spread across the following pages. On page 2, we’re taking a look at renderers with the help of Blender, Radeon ProRender, and LuxMark. Page 3 is home to our encoding tests, which are handled by Adobe’s Premiere Pro, VEGAS Pro, BRAW Speed Test, and an application we throw into the same pile: Agisoft’s photogrammetry tool, Metashape. Page 4 handles viewport performance across a range of popular suites. Page 5 tackles synthetic system tests with the help of SiSoftware’s Sandra, while page 6 covers the same synthetic angle for gaming. The final page will include some power tests along with our final thoughts.