In advance of benchmarking for this article, we wanted to revisit our Premiere Pro tests, and see if they could be improved. One thing we realized with different encodes was that testing 1080p encoding is really difficult nowadays because today’s GPU hardware doesn’t consider it much of a challenge. What we saw were results that were a bit too sporadic, so we chopped out the 1080p YouTube test we used to include.

Similarly, we used to output to 1080p for our 4K tests, and 4K for our 8K tests – both bad moves. As it happens, if you output to a lower resolution, it’s not as grueling as it would be to encode to the same resolution. Ultimately, the decoder would perform similarly between GPUs in the same series, and then the encoder would output to a low resolution that again can lead to sporadic results.

For this article, we fixed all of that, and made sure our projects outputted to the same resolution as the source – which is probably how most people would be using their high-res footage. While we chopped out the 1080p YouTube test, we added a 4K project that was designed with many common effects in place, all of which happen to use the GPU to pretty good effect.

Let’s check out the results: 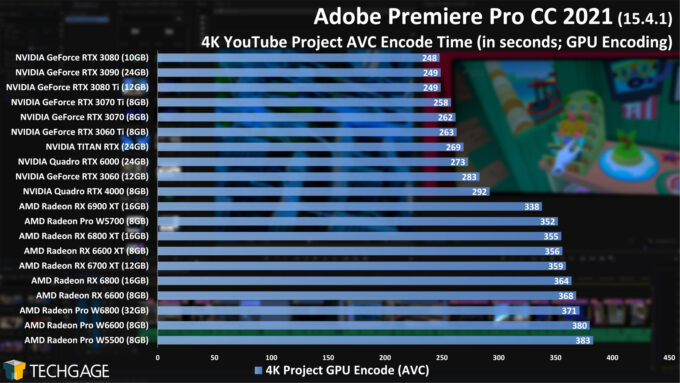 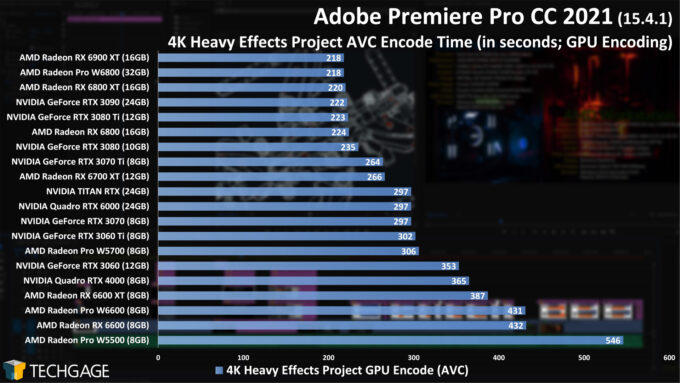 Our 4K YouTube test is pretty standard fare, but represents a typical project someone would upload to their channel. Overall, NVIDIA places ahead in that test, and by a pretty significant margin. Roles reverse a bit with second project, however, with AMD really doing well to crunch through the GPU-intensive effects.

What’s really quite interesting with the heavy effects result is that the W6800 places alongside the RX 6900 XT, even though the latter is faster from an overall performance viewpoint. It’s as if the extra memory on the W6800 helped us out in this 4K test, something that bodes well for even higher resolutions.

We’re not done – let’s check out some codec encodes: 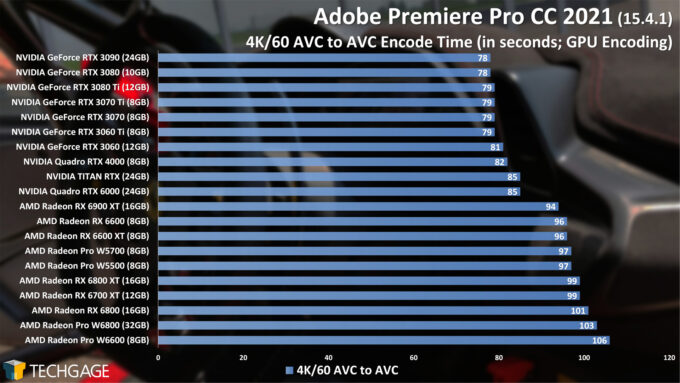 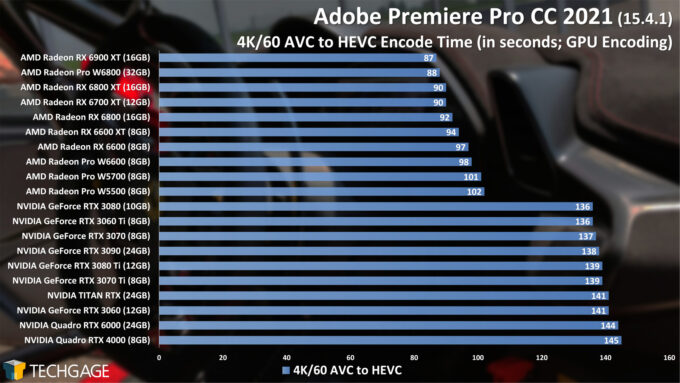 The results above paint another interesting picture: NVIDIA dominates AVC encoding, while AMD dominates HEVC – the latter of which has a slightly greater delta than the former. This is quite a good look for Radeon. And guess what? The interesting results are still not done: 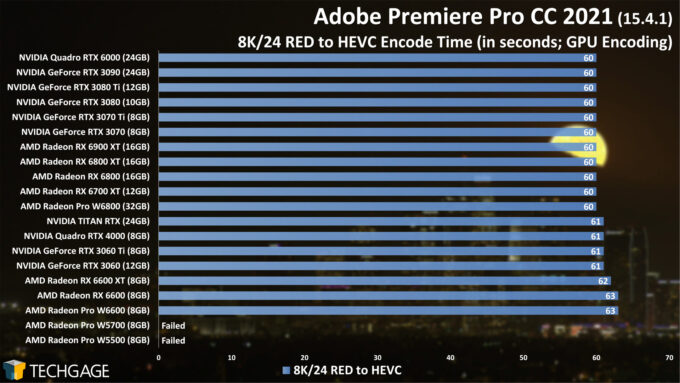 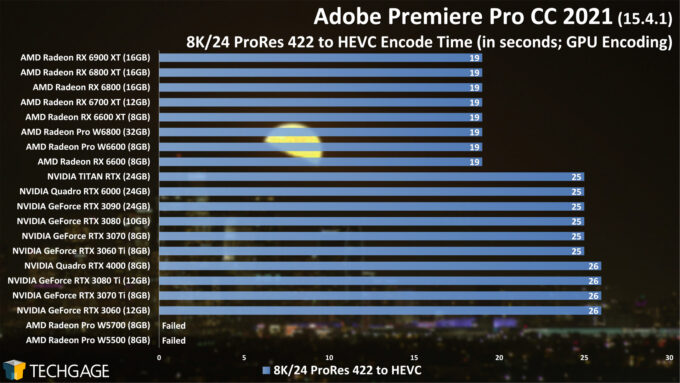 It’s immediately clear that if you want to work with 8K footage, then AMD’s last-gen RDNA1-based GPUs are not for you. The encodes on those models couldn’t even begin the process. Considering that other 8GB GPUs were able to pass the tests, we’d have to imagine this is a limitation of the encoder chip.

On the topic of 8K, we have yet another interesting result, with the RED test. We used to see good scaling with this test, but lo and behold, as soon as we decided to output the encode to 8K as well, every GPU began to perform the same. This is something we can’t quite explain, but going forward, we’ll re-introduce the 8K > 4K encode for both RED and ProRes.

While AMD’s last-gen Radeon Pros struggle with 8K, the new-gen loves it, with every single RDNA2-based Radeon proving faster than NVIDIA’s Ampere and Turing in our ProRes test. In another nod to AMD, Radeon proved quickest in all of our HEVC encode tests. 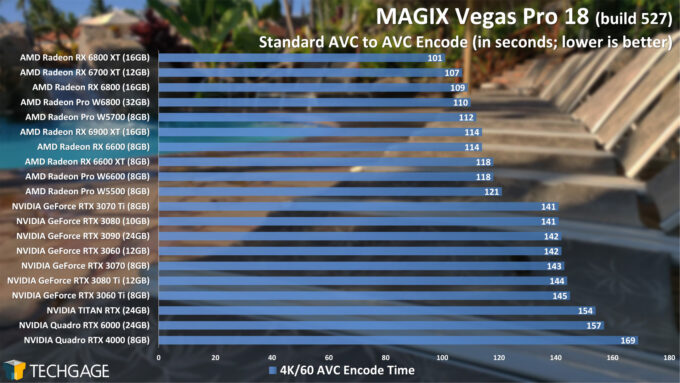 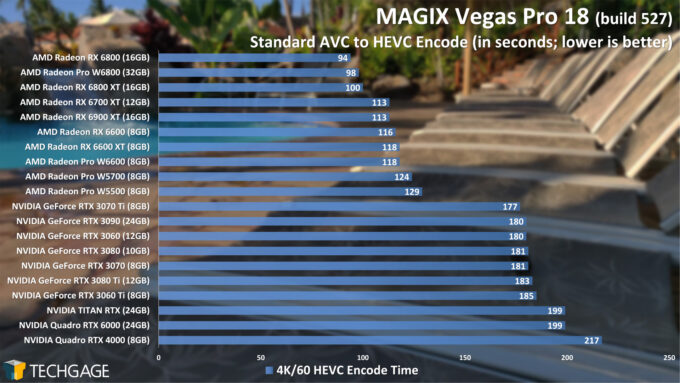 Right off the bat, our VEGAS results show slightly different scaling than Premiere Pro did. The above tests represent a project with absolutely no effects; it’s straight footage that’s transcoded. In the case of both AVC and HEVC, AMD proves itself the champion – but especially so with the latter. The performance deltas there are pretty huge.

Let’s test out some effects: 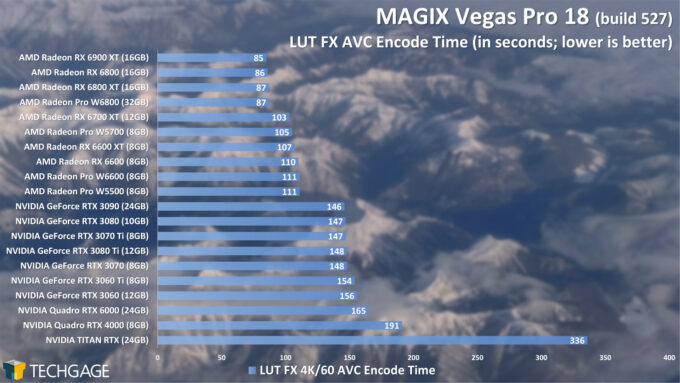 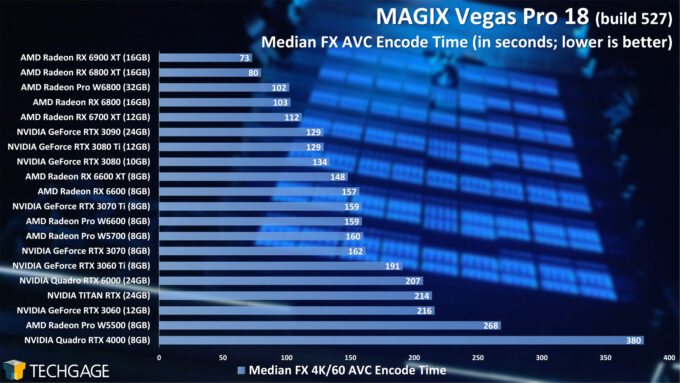 We’ve been testing VEGAS for quite a while now, and overall, AMD has always seemed to have an advantage – and nothing has changed up to this point. We’ve yet to dig into the new VEGAS Pro 19, but will be doing so soon. We don’t expect any major shake-ups there, from what we’ve seen so far.

While not the focus of this review, it’s worth highlighting some of the odd results here. The TITAN RTX falls to the bottom in both of these tests, nonsensically, and the last-gen Quadros don’t fare much better. It used to be that adding VEGAS Pro as an application inside of NVIDIA’s Control Panel would “fix” performance issues like these, but that no longer seems to be the case. It goes without saying that we couldn’t suggest going with Quadro or TITAN for VEGAS Pro use. 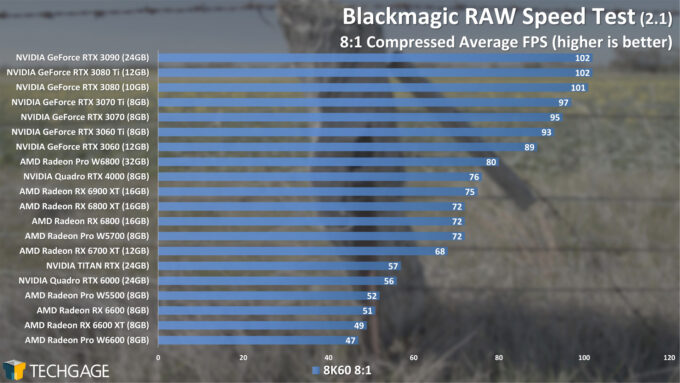 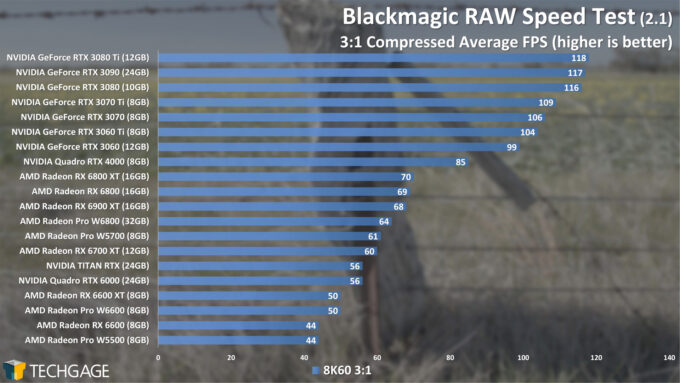 Overall, it seems that NVIDIA has an inherent advantage with BRAW, as it manages to beat out AMD in both of these compression tests – the latter of which (3:1) highlights rather stark differences. Considering the W6800 and RX 6800 flip-flopped between tests, it doesn’t appear the 32GB frame buffer of the Radeon Pro makes much of a difference here, but naturally, it would if your project could actually use that much memory. 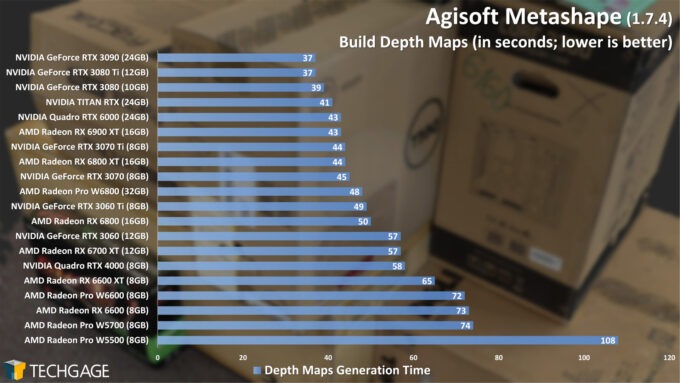 An entire photogrammetry process will consist of different tasks throughout, each of which will use either the CPU or GPU, or both together. In Metashape, the Align Photos function uses both processors, but the overall time the process takes makes the results non-interesting from a scaling standpoint. Build Depth Maps is different, as the above chart highlights.

AMD lags a bit behind NVIDIA in this particular test, when comparing one competitive card to another. Fortunately, Metashape, and every other photogrammetry application heavily uses CPUs, so AMD isn’t exactly losing out on much here, since its Zen processors are great for these tasks.