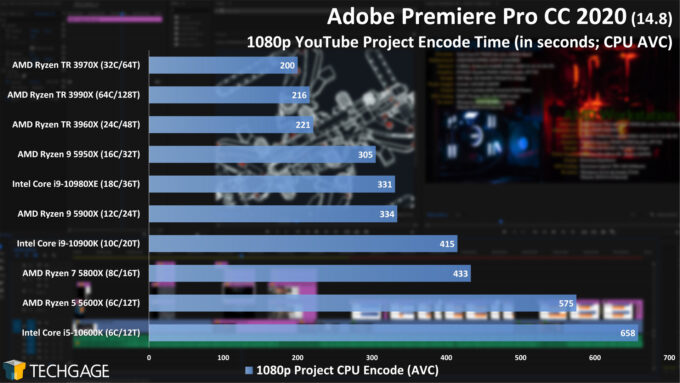 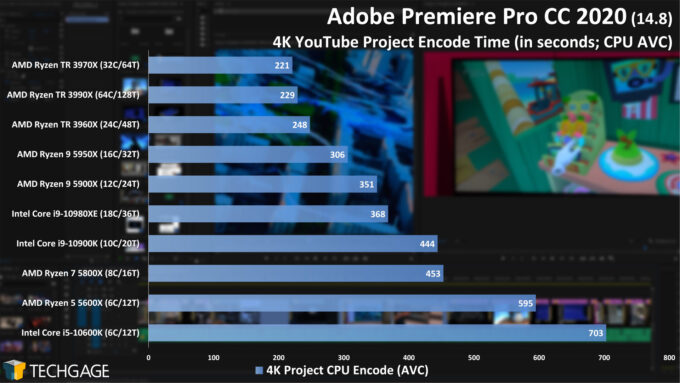 The projects we use for testing could be a bit better developed, but as you can see, they still take good advantage of whichever CPU they’re given – even the easier 1080p test. At the top-end, the many-core chips flip-flop over each other a little bit. The 5900X 12-core seems to be one of the best bang-for-the-buck CPUs here, but you will thankfully see obvious improvement if you go even higher. 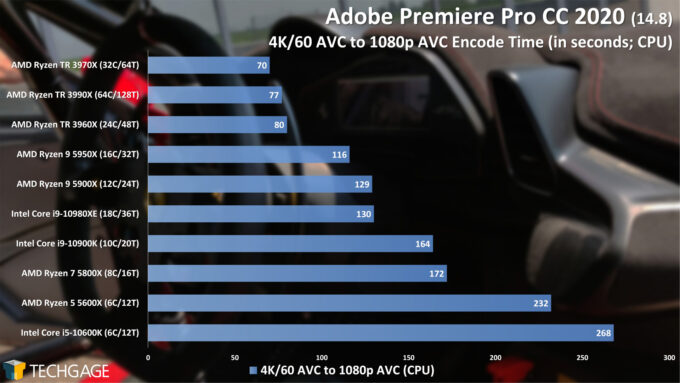 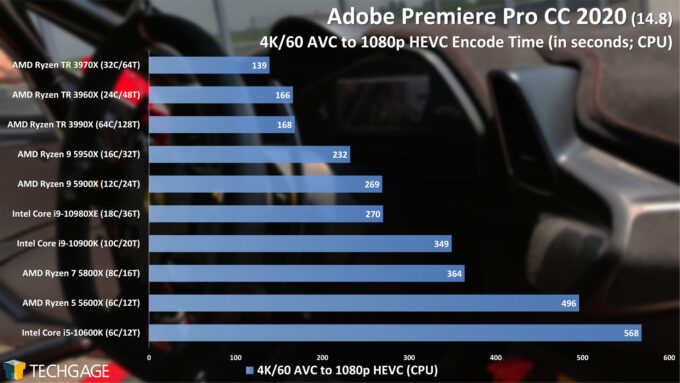 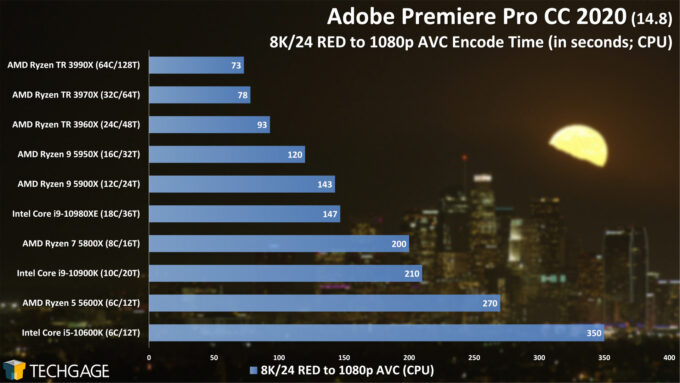 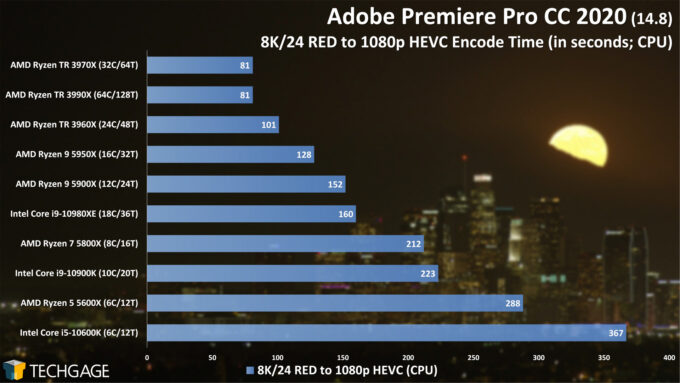 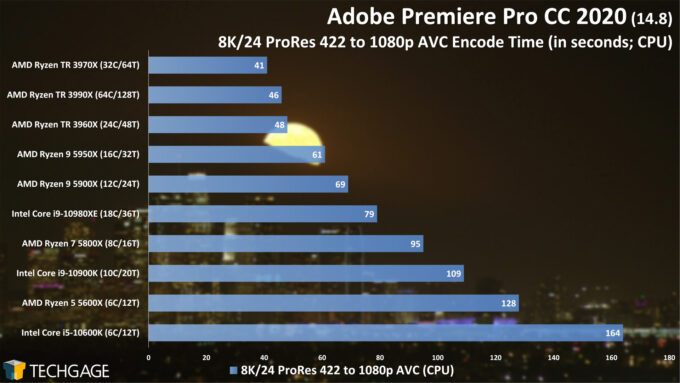 While projects are varied in design and give the CPU a lot of different assets to work with, transcoding one single file from one format to another is a lot more straight-forward, and gives every CPU a better opportunity to strut their stuff.

With the project encode tests, we saw the Threadripper chips flip-flop over each other, and for the most part, we see the same with these transcode tests. It was only with the RED to AVC test that the 64-core Threadripper 3990X managed to take the top spot. In most other cases, it was actually the 32-core 3970X that took the top spot.

Ultimately, the scaling overall is quite good here. It becomes clear that you really don’t want to go too low-end on your CPU, or else you’ll be waiting a lot longer on each encode. That said, as with most rendering, CPUs tend to not be quite as fast as GPUs, but combing their efforts could lead to even better overall performance. Let’s add a GeForce RTX 3070 to the mix: 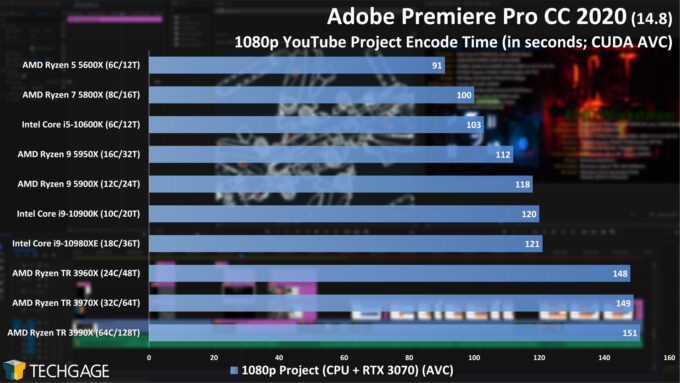 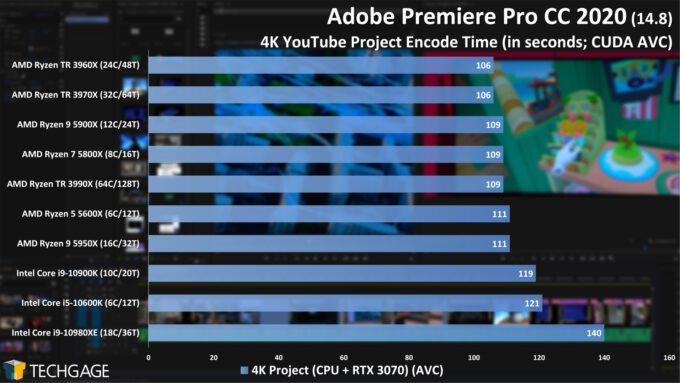 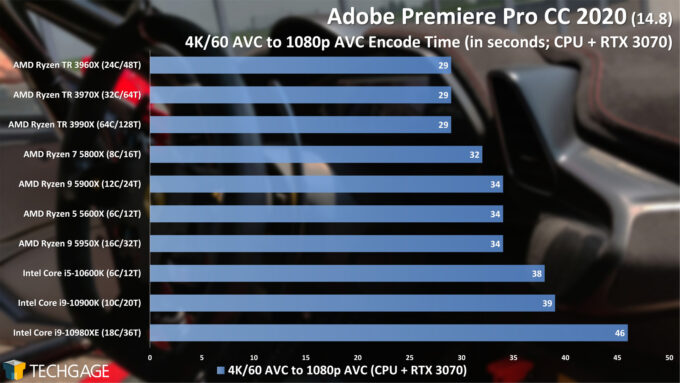 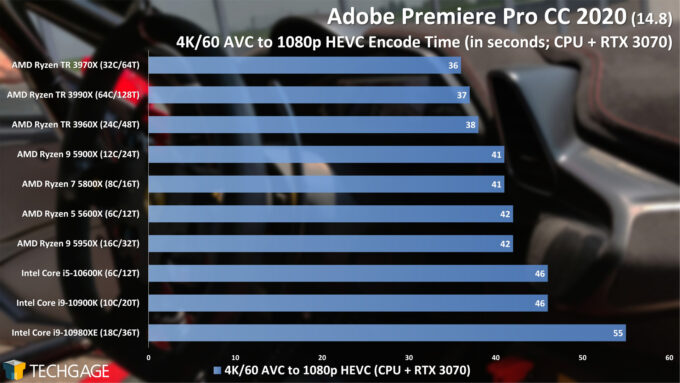 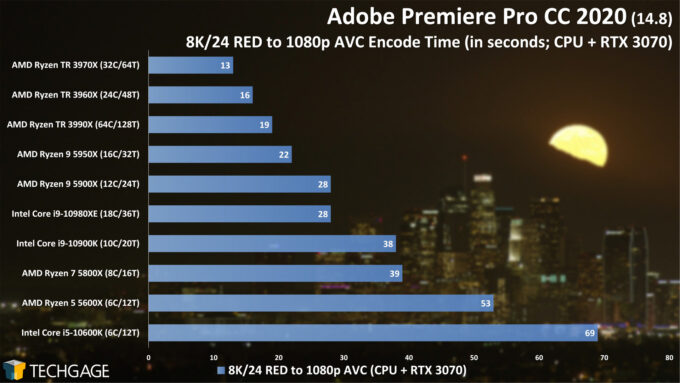 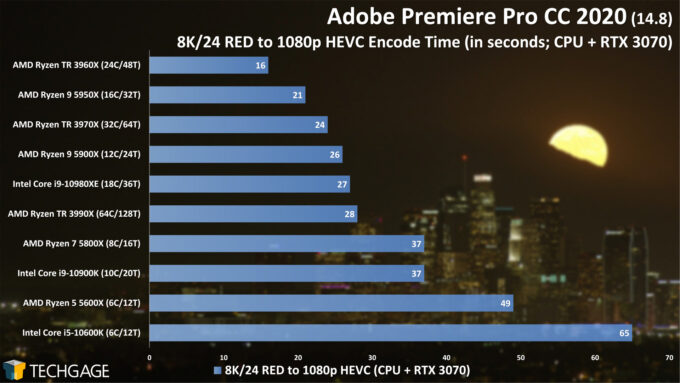 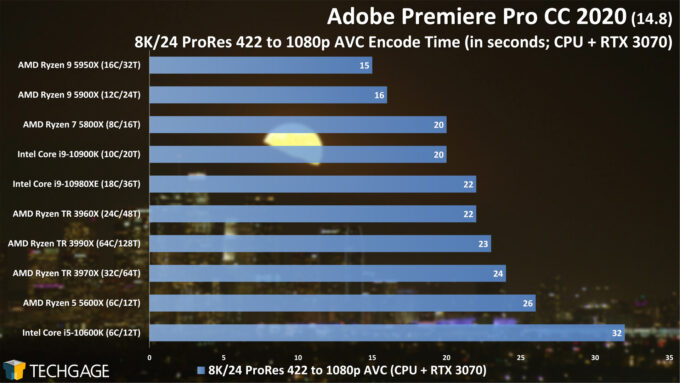 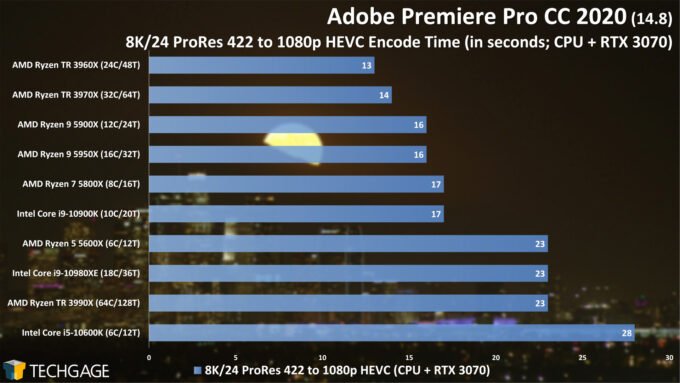 Adding a GPU to the encoding gives us some really interesting results. Somehow, the six-core Ryzen 5 5600X took the top spot of the 1080p project encode, but with this type of workload, we could see slight differences on another day (encoding is a lot more sporadic than rendering).

Ultimately, what is proven here is that a GPU is really important to video encoding, and if for some reason you still wish to stick strictly to CPU-only, you’ll want a beefy chip. Adding a GPU to the mix almost breathes new life into a CPU, allowing both to work in tandem to get the encode done much quicker. In some cases, the faster clock speeds of smaller core-count chips can help propel them high in a chart. 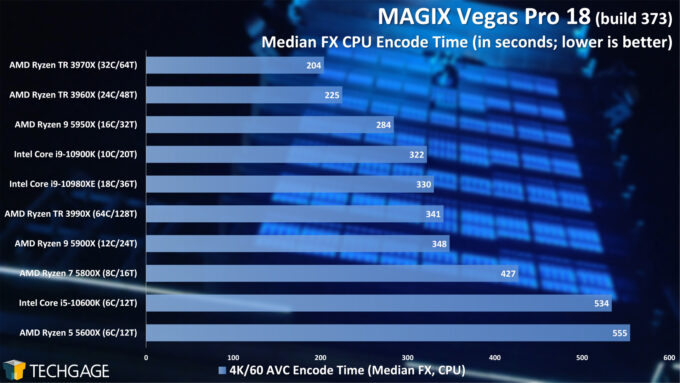 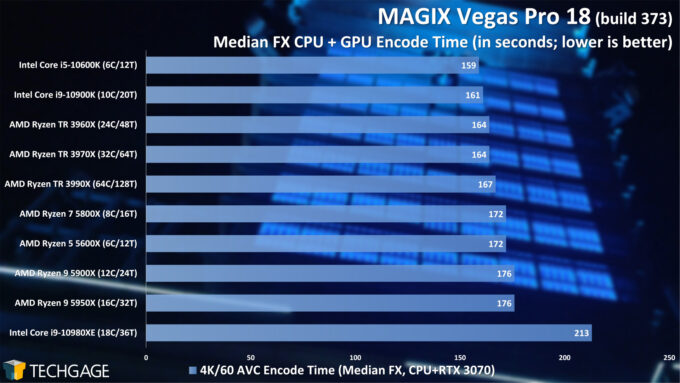 With MAGIX’s Vegas Pro, we’re seeing similar scaling as we did with Premiere Pro, with the 32-core Threadripper once again utilizing its cores better than the big sibling 3990X. Adding a GPU changes the scaling entirely, although we should stress that the CPU+GPU test uses just one filter, and across the entire file. We’re currently investigating if there are better ways we can test Vegas, but in all of our testing, it’s the Median FX that has proven to be the most grueling, so it acts well as a worst-case scenario. 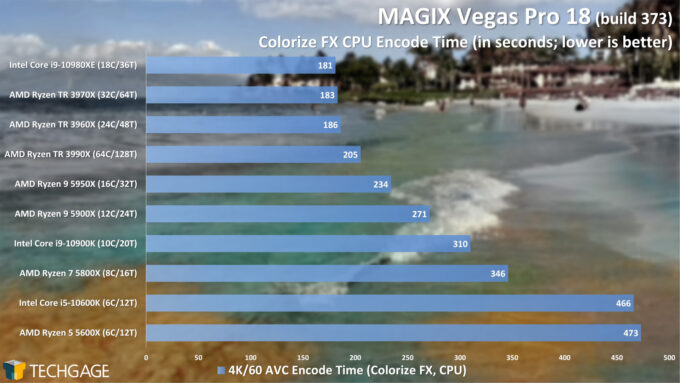 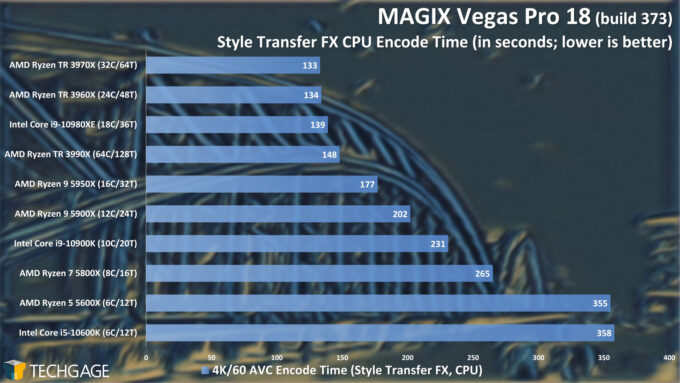 With the release of Vegas Pro 18, MAGIX added the software’s first FX features to utilize AI. That primarily involves the Colorize and Style Transfer options, which are pretty self-explanatory, and fun to use. They also require a lot more time than most other FX types to encode; each of the AI encodes above encompass a source that was just five seconds long.

As with some of the previous results, the top-end of the chart shakes things up, and scales the models in an order we wouldn’t expect. Intel’s 18-core i9-10980XE seems particularly strong here, while the 64-core Threadripper sits behind even the 24-core. If only encoder scaling was more predictable! 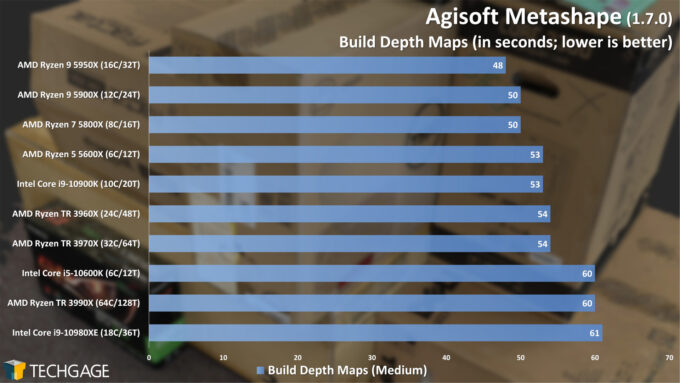 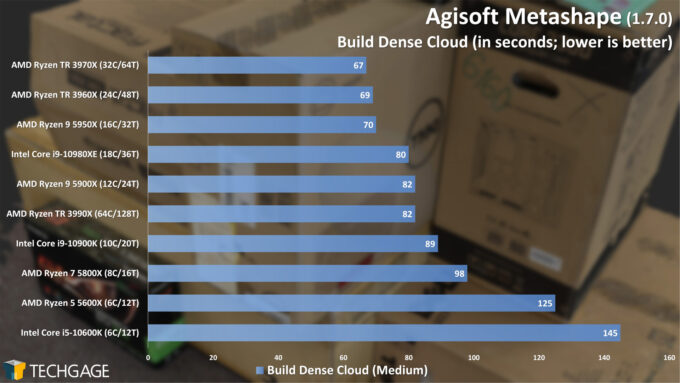 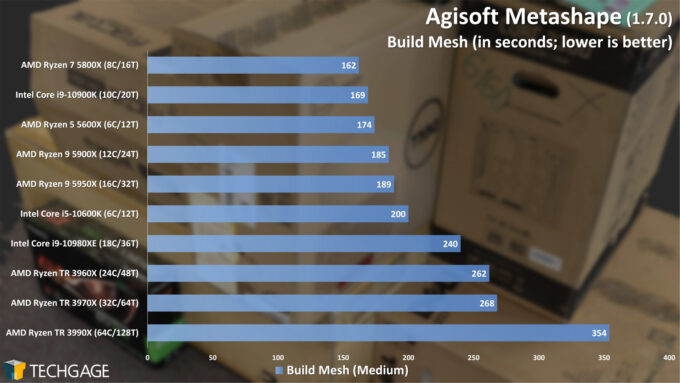 More than most workloads, it’s difficult for there to be such thing as a “perfect” CPU for photogrammetry. From start to finish, a photogrammetry task will utilize the CPU and GPU differently throughout, so it might only be with one particular step that one CPU may excel over others.

The Depth Maps process is the first one we record, and it’s one that uses both the CPU and GPU together. The follow-up Dense Cloud and Build Mesh steps use only the CPU. As usual, the Mesh graph puts an interesting chip at the top. It’s as though the 8-core Ryzen 7 5800X has the perfect blend of cores and clocks – but only for that test.

Overall, AMD’s 12-core Ryzen 9 5900X looks to be the most effective for its given cores and clocks, but for the most part, it’s really hard to pick a single SKU as being the best here, since no one chip excels in every case. It seems a lot safer to eye a mainstream CPU over the enthusiast Core X and Threadrippers, however.