Ripping Your Blu-rays the Easy and Free Way

Do you think that getting a Blu-ray movie off of its disc and onto your PC is complicated? It once was an arduous chore, but today, it’s easier and more accessible than ever. We take a look at one of the simplest ways to both rip a movie onto to your PC, and then encode it into a variety of formats. Best part? It will cost you $0.00.

Page 2 – Converting your Blu-ray to a Single File…

In searching for the easiest application to use to convert a Blu-ray rip into a single file, I found myself frustrated. The problem isn’t so much that there’s a lack of applications to do this seemingly simple task, but it’s the fact that there are too many. It’s almost impossible to download them all and dedicate time to each for testing.

For DVD’s, there are many applications out there that allow you to simply load up the ISO or individual files and export to a single file or multiple files, but for Blu-ray, finding such a thing was complicated – at least while thinking along the “free” line. It could be that there are professional tools for accomplishing the same thing, but I’m unaware of them, and either way, those are likely to cost upwards of $100, and likely much more.

Then I stumbled on an application that looked to deliver exactly what I was looking for, and fortunately, it lives up to all of its claims. It’s called RipBot264, and it takes out a lot of the hassle of dealing with a bunch of different applications to end up with the same finished product. With it, you won’t have to manually demux the video and audio… you simply click a couple of options and go to sleep (yes, it takes a while to complete).

What RipBot264 allows you to do is take a Blu-ray file (.m2ts), rip out the audio and video, and then convert it all into a format that you can take anywhere. We’re not talking only about to your HTPC, but even your mobiles as well, including the Apple iPod and Sony PSP. The best way to show off the program’s functionality is to simply talk about it, so let’s do that.

Currently, the developer of this software doesn’t have an official website, so you’ll have to grab it from an official thread on the Doom9 forum. If you run into issues with the program, this is the same spot to ask questions.

Once installed and loaded up, the program is likely to display this screen: 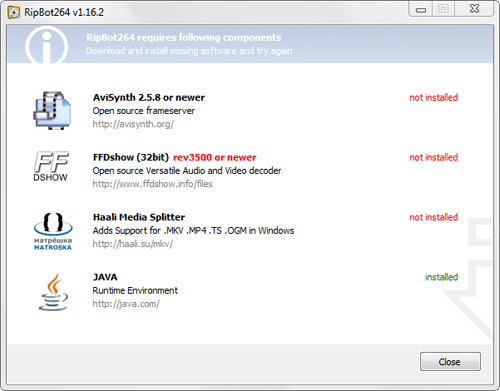 RipBot264 is mostly a front-end for other applications, those of which will be listed here. In order to access the program at all, you’ll need to download each one of these mentioned and install them. You can simply click on the URL’s under each name to go straight to that software’s website. For the sake of making sure nothing went wrong, I installed AviSynth and Haali Media Splitter with all options enabled, while I installed FFDshow with default options.

Once done and into the application, you’re left with a very simple interface. From here, you need to click the subtle “Add” button towards the bottom-right corner. 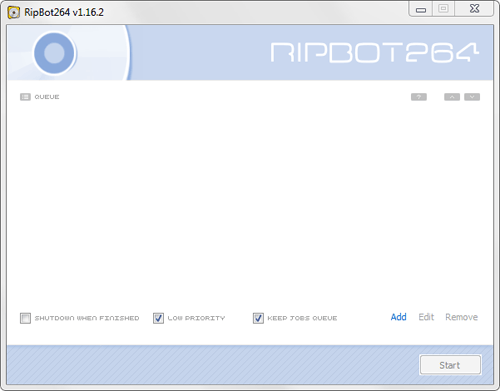 This will bring up a Windows prompt, enabling you to go and find the video file you want to handle. This file might be located in a slightly different location depending on the Blu-ray, but most often, it’s found in the BDMVSTREAM folder. Here, a variety of Blu-ray files are located, and most often, the movie is the largest file in the list. In this case of Donnie Brasco, that file is a staggering 39GB. If your Blu-ray happens to have multiple large files, the “Length” section of this dialog might help you better single out the proper file. 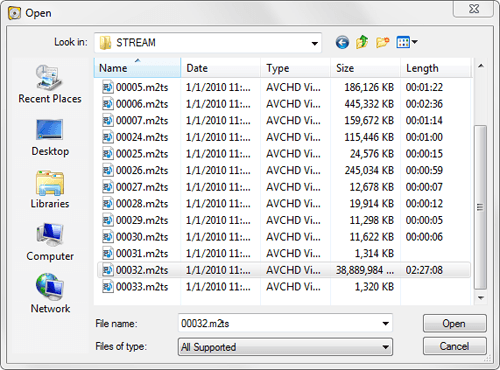 After you select the appropriate file, RipBot264 will automatically begin scanning the file for various bits of information, such as the number of chapters, the available audio streams, and also subtitle information. From here, you can choose whichever options from each you want. For the audio, you probably want to select the best possible option, unless you plan to rip to a mobile. You’ll also want to disable chapters if you want a single file result, and also subtitles if you don’t want them to be included. 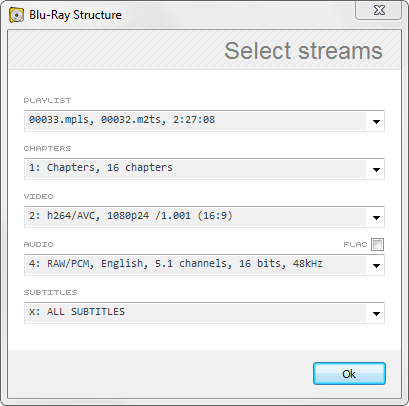 Before moving on, you might want to decide at this point whether or not you’d like to encode the audio into FLAC, which on average would deliver a bitrate of over 1,000Kbit/s. Depending on the audio track and end format, RipBot264 might not be able to include higher-end audio than this in the final product, and if not, then you’ll cap at 640Kbit/s AC-3. That’s by no means poor, as it’s 2x the top-end bitrate for an MP3, but for those with higher-end sound-systems, FLAC or lossless audio might be preferred. For some reason, after this screen is passed, you’ll be unable to choose FLAC, which is unfortunate as the only way to get it back is to reload the file.