ROCCAT impressed us with its Isku FX gaming keyboard last year. This time around the company sent us its Kave XTD 5.1 Surround Sound gaming headset. With a “true” hardware-based surround sound design, as opposed to a software-emulated one, how good is the Kave XTD 5.1? Find out as we put it through its paces.

Almost a full year ago, I reviewed ROCCAT’s Isku FX gaming keyboard. While it didn’t quite earn Techgage’s Editor’s Choice award, it still impressed with its long list of gamer-friendly features. Today we have something new from the good folks at ROCCAT: The Kave XTD, a 5.1 surround sound gaming headset.

This is something of a cherry-breaker for me. You see, this is the very first time I’ve ever sampled a hardware-based surround sound solution. I did review a surround sound headset several months ago, but that was more of a software-emulated type of surround sound. After all, that headset had just one speaker driver per ear cup; the surround sound effects came from the in-line USB sound processor which worked in conjunction with a software package that had to be configured to get the best effect. If the user chose to not plug in the USB sound processor, that headset functions fine as a stereo set.

In contrast, ROCCAT’s Kave XTD 5.1 features three drivers in each ear cup. Just by knowing this fact alone, you’ll know that this is a hardware surround sound solution.

As an aside, knowing that the Kave XTD 5.1 has six speakers in total, calling this a 5.1 surround sound headset is a bit strange. Convention dictates that audio solutions define “5.1” as having five discrete speakers specifically arrayed as two front speakers (L & R), two rear speakers (L & R), and one speaker directly in front of the listener, with the “.1” specifying a separate subwoofer. Therefore, any headset declaring itself as a 5.1 (or 7.1, which adds two additional speakers directly abeam of the listener) system is fudging convention somewhat because, well, there is no center channel. Not only that, but the subwoofer has to be split in two as well.

Having said all this, as long as what the listener hears approximates a true (that is, a non-headset based) 5.1 surround system, then the job is done.With that preamble out-of-the-way, let’s have a detailed look at ROCCAT’s Kave XTD 5.1 surround sound gaming headset. 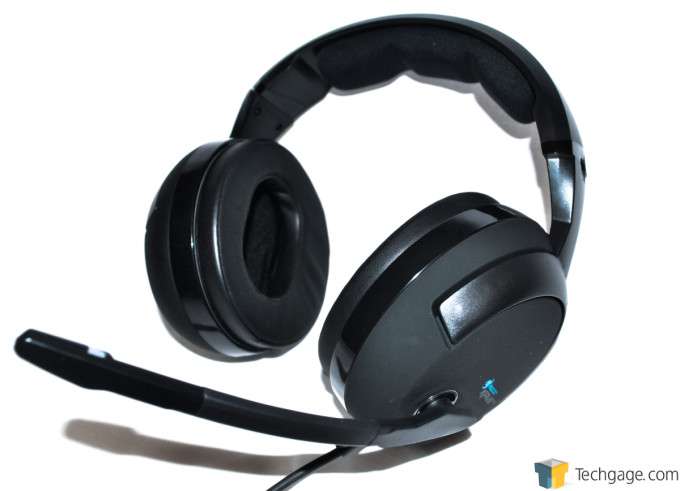 The ROCCAT Kave XTD 5.1 is a fairly robust-looking yet stylish piece of kit. Somewhat reminiscent of the company’s Isku FX gaming keyboard, it is clad in a preponderance of an almost black matte grey, highlighted in a few places by satin and gloss black. Also catching the eye are the baby blue and grey logos on both ear cups. 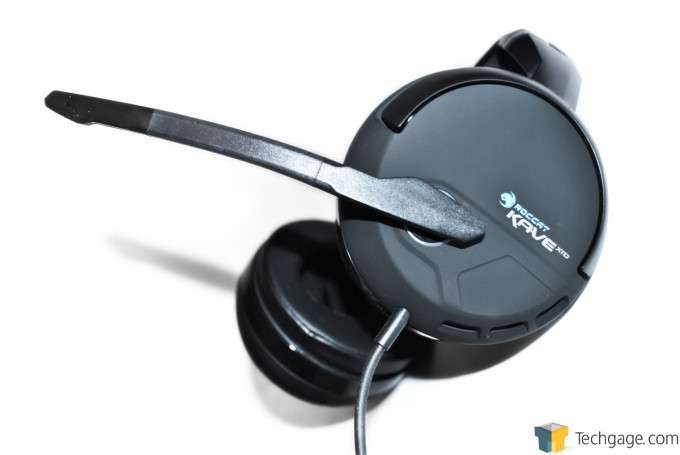 Per convention, the left ear cup is where both the microphone stalk – which swivels up and down – and the cable are connected. The mic stalk is detachable. Just aft of the mic pickup is an LED that glows light blue when the mic is muted. 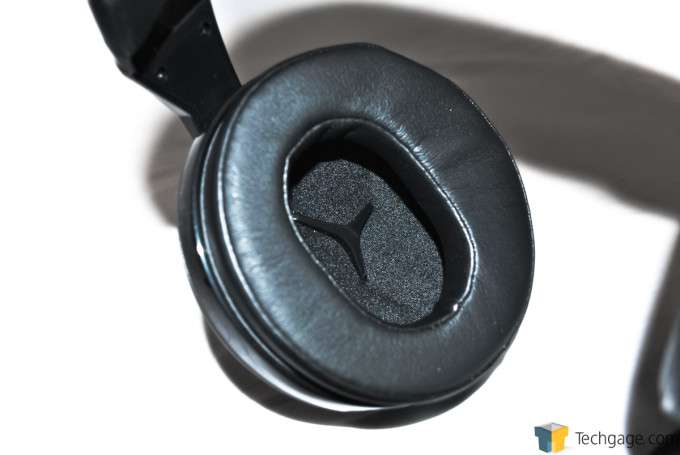 Pictured here is the inside of the right ear cup. The Y-shaped detail in the middle of the ear cup is a visual clue of what’s beneath the protective lining. 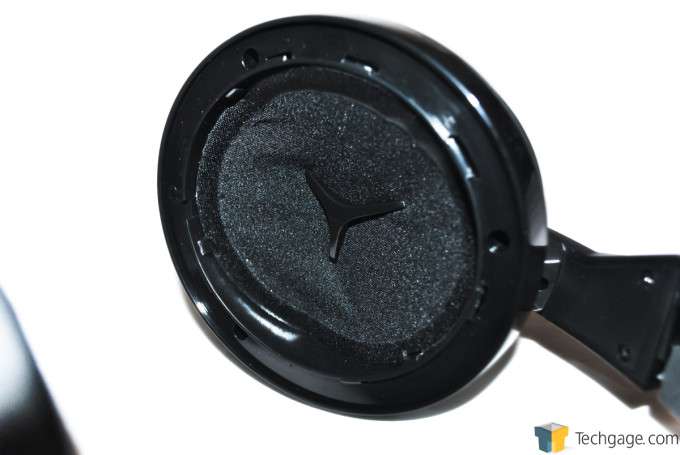 Inside each ear cup, beneath yet another protective layer of what looks like a nylon stocking, is a trio of speaker drivers. I couldn’t figure out a way to remove this inner protective layer, but when you press down on it you can sort of see the three drivers. The drivers are each angled at 12° from the horizontal for optimal projection into the user’s ear. 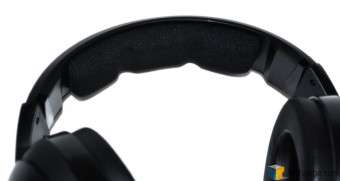 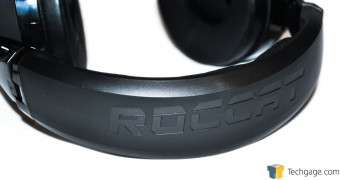 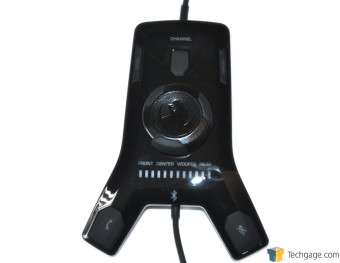 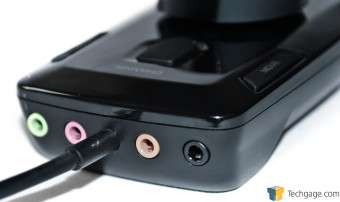 The Kave XTD 5.1 features an in-line control unit. The volume control knob, which is decorated by an embossed ROCCAT logo, dominates things here. Not only does it makes things louder and softer (as you might expect), but pushing down the center of the knob mutes all audio signals. There are also a few other buttons that users should also pay attention to. Right above the volume knob is a Channel switching button; with this you can set each individual speaker channel’s volume output. Flanking the Channel button are the Movie mode button (on the left edge of the control unit) and the Spkr button (on the right edge). The Movie mode button engages Movie mode, which alters the sound output’s characteristics and optimizes it for movie soundtrack playback. The Spkr button, on the other hand, switches the sound output from the headphones to any speakers connected to the control unit. The speaker connections, by the way, are on the inbound side of the cable (the front edge of the control unit).

Moving on to what’s aft of the volume knob, you have two other buttons. The one on the right rear is a Mute button (pretty self-explanatory), while the one on the left is a bit more interesting. The icon looks like a telephone; pushing it allows a mobile device paired to the control unit via Bluetooth to cut in, thereby turning the Kave XTD 5.1 into a mobile phone-capable headset. Pretty spiffy! 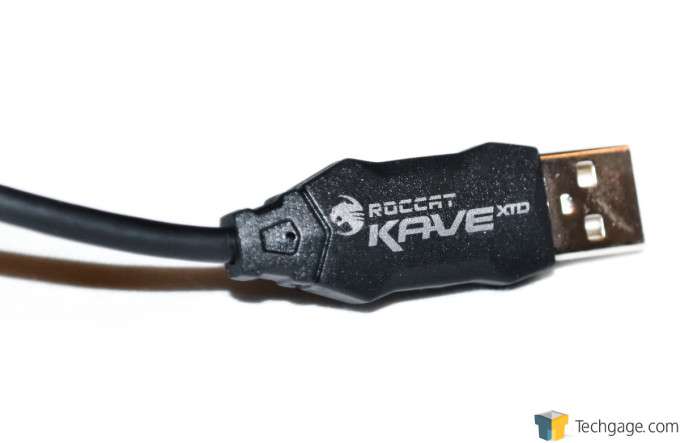 The cable (all 3.6m/11.8′ of it!) terminates in a single USB connector. What, you were expecting a bunch of 3.5mm connectors, one for each audio channel and for the microphone input? Au contraire, mon frère! The Kave XTD 5.1’s great trick up its proverbial sleeve is that it is an all-in-one audio solution; the only thing ROCCAT doesn’t supply is a set of speakers. There’s no need to connect a big bunch of separate connectors because the Kave XTD 5.1’s control unit also functions as a sound card. Accordingly, you need to install ROCCAT’s driver for the device to get the most out of it.

Another comment about the cable, specifically the connector at the end. I just love how ROCCAT labels it with the product name. I’ve said it before, and I’ll quote myself here: “I quite like the connector, as it is labeled very clearly. Labeling the connector like this is a very clever and elegant solution, one that I would someday want to be an industry standard. Times without number I’ve accidentally pulled out the wrong USB device from the rear I/O panel. Silk-screening a label onto the connector is a very intelligent convenience item, one for which I give ROCCAT a truckload of extra points.”

Now that we’ve seen the hardware portion of the Kave XTD 5.1, let’s move on to a look at its software.