We took a look at Sabayon 3.0 a few months ago and were greatly impressed. The developers haven’t taken a break since that time, and now 3.2 is upon us. We are diving in heads first to see what’s new and what’s been updated.

It’s been a full four months since we have taken a look at the “sequel” to the RR4 distro, Sabayon. Named after an Italian dessert, I am not sure how that relates itself to Linux. Perhaps because it’s a tasty distro? There’s no denying that this is one of the most robust and fresh looking distros out there, so that may very well be the case.

When I first touched Sabayon, I was immediately impressed for a variety of reasons. The first being the superb hardware detection, which was the best I’ve found in any distro. Upon initial boot, everything was detected. Sound, graphics, network and even power saving capabilities if you are on a laptop. The distro is built on top of Gentoo, one of the more popular source based distributions. Although Gentoo by itself is strictly for people who enjoy a learning curve or people who understand the ins and outs of Linux to begin with, Sabayon caters to everyone. Those who understand Linux well, and those who don’t understand Linux at all.

You could say that I am a fan of Sabayon, although I don’t personally use it as my regular everyday OS. I personally use Gentoo on my regular system, primarily because I like to start from scratch and build it up. Sabayon is a distro for those who love having a complete system, without having to worry about many add-ons. As you will see shortly, after installing Sabayon you will have a complete system ready for anything. That includes browsing the internet, photo editing, playing music, watching DVD movies… ripping/burning DVD’s… and so on. All of this can be done after the first boot -without- any user intervention, or having to load up the konsole.

That all said, let’s jump right into it and see what we have new and updated.

Upon the boot you will be greeted to a slew of various options, the primary being the main mode. This is a Live DVD, so anything you boot up with will bring you to a live KDE environment where you can go ahead and install. Music Edition is primarily there to play a cool song (Song 13 on this page) during the boot sequence. Since it takes around 5 minutes to get to the desktop, it is a welcomed feature if you have nothing else going on in the room. Staring at boot screen is hardly fun! 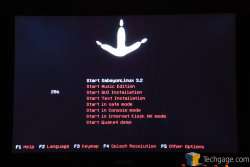 Other options are self explanatory… quick installation methods and also a console. If you want to get your game on quick, you can choose the Quake IV options which will boot the OS and immediately begin the demo for playing. Since the distro will automatically detect your ATI/NVIDIA video card, this should prove no problem unless you have an ancient one. 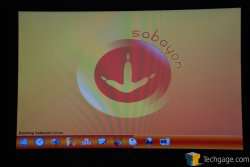 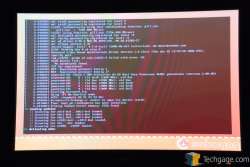 Well, that’s not always the case however. For whatever reason, my AMD AM2 system dislikes most versions of Linux so I have to use workarounds to get anywhere. At the main option screen you will be able to choose to press the F5 key which will allow you to edit the boot query. In order to boot I had to remove the “quiet –” at the end of the query and add in “noapic”. I have had to do this is every single distro on this machine, irregardless of kernel version.

One thing that Sabayon is known for is the fact that you can boot/install an XGL based environment with ease. When you finally make it into the desktop you will be prompted for AIGLX or XGL, if you have a capable card. This is where I ran into another issue, oddly enough. I run an ASUS 7900GT card, which is obviously still well supported by NVIDIA. Booting up with this distro using an ASUS 7950GT proved no problem at all… XGL worked like a dream, however it was not the case with the 7900GT despite being almost the identical model. In order to get support, I had to manually add “opengl=nvidia” to the end of the boot query, which gave me support for both AIGLX and XGL. 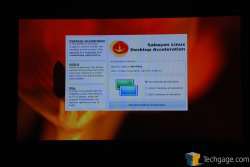 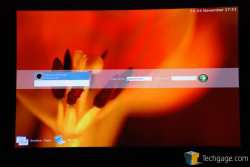 I am the type of person who runs into far more problems than most people, so I’d imagine you will run into much less issues than I mention here. Booting up this distro on my workstation AMD 939 (7800GT) system and also my moms Intel 775 Dual Core (6800GT) proved to work without issues.

Ahem. That all aside, the developers are working on fixes for the GPU, although the AM2 specific issues are kernel related. 2.6.19 will be taking care of those once it goes stable.

If you have used Sabayon 3.0 or 3.1, the first thing you will notice here is that the theme has been completely overhauled, although the basic layout is still intact. In case the OS improperly detected your resolution, the first thing you can do is adjust it accordingly. 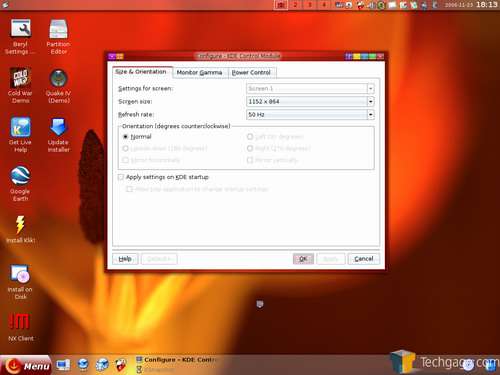 Like the previous versions, the top menu bar acts as your system tray complete with date and time, and also your different desktops. The bottom bar obviously includes your K menu, quick shortcuts and also inserted media along with your trash can. Regardless of whether or not you have 3D support, Cold War and Quake IV (both demos) are available on the desktop. Google Earth, NX Client and GParted is also here. Note that GParted is renamed to “Partition Editor” to help newer users understand where to look.

In addition to being able to install the OS, you can first update the actual installer before proceeding. This essentially will download the latest version available, and takes half a minute. Once done you are good to roll. 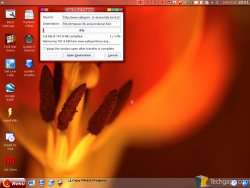 One thing that Sabayon veterans will catch right away, is that the standard KDE “K” has been replaced with a cool “Menu” button graphic. Upon hovering over this button however, you will be welcomed to the exact same kicker as seen in SUSE Linux. This makes Sabayon the first distro to port this special menu over, and from what I hear it was a huge pain in the rear. 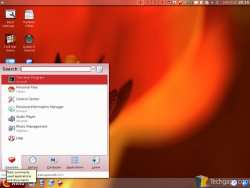 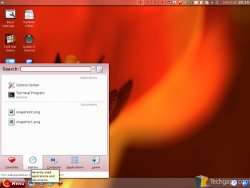 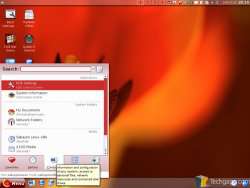 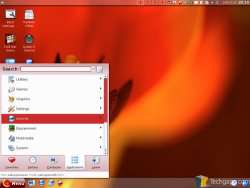 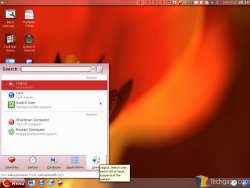 The menu completely replaces the K Menu in order to be more user friendly. There are five primary tabs, the first being for your favorite apps. The second is for your history which includes recently used applications and documents. Computer gives you quick access to your media and also various control panels. Then there is an applications tab that allows people to find their programs. Lastly there is the Leave tab, which allows you to log out or shut down.

Probably the most beneficial part of this menu though, is the search feature. If you are unsure where an app is located, simply type in it’s name and you will be brought to the right location. Overall, I found that this kicker was not my cup of tea… I enjoy the standard K menu more. However, this kicker would be great for newer computer users, or those regular Linux users who simply love the look of it. If you don’t want the kicker, you can right click it to bring back the old K Menu style.

Menu aside, for those who have no interest in actually installing the OS, there are plenty of programs pre-installed and ready to go. Some may give you issues however, since you are essentially using an OS on a CD and not a hard drive. To do quick work, you can simply use a thumb drive to save the data, or another burner rom to save it that way.