We have been a fan of SabayonLinux for quite some time, so we could not pass up a chance to tinker with their heavily anticipated new version. In addition to updated software, 3.3 brings about a new color scheme. It’s also touted as being more stable, so let’s put it to the test.

Due to time constraints and other content in development, I haven’t had the chance to evaluate that many Linux distros recently. When SabayonLinux 3.3 became available however, I had to make time. When I first used SL last August, I was impressed from the get go. It’s not to say that using SL was a trouble-free experience, but by far it was one of the simplest and "fun" distros to use.

At the time of our first SL article, it was also the first time the RR4 name was set aside in favor of Sabayon. Since that time, the distro has enjoyed huge success and now ranks as the 8th most popular distro over at DistroWatch. While the credibility of these rankings are often disputed, there’s no denying that SL is making a mark.

It’s no surprise though. Lead developer Fabio Erculiani has an undeniable and infectious passion for what he does. There are many people who are good at what they do, and Fabio is one of those people. The effort he and his team put into SL is evident, since each new version doesn’t offer only a few minor updates, but is often an overhaul of the previous version entirely.

There are a few different reasons why SabayonLinux stands out in a crowd. First is the fact that it’s a complete package. You will not install SL and be unable to do what you need to right away, whether it be spreadsheet editing, photo manipulation, music playing or even DVD movie watching.

It’s robust selection of pre-installed packages is one gripe that some hold against the distro, because there is way more than what people need. I don’t disagree with this. No one out there will use all the programs installed, since there are multiple application types for a single purpose, such as a web browser. That’s where their Mini-Edition comes in though. It’s far smaller, but still offers the core functionality people have come to expect. At this time, the mini-edition is not available for 3.3, but should be in the coming weeks.

Another reason SL has proven successful is thanks to it’s hardware detection/configuration capabilities. Meaning, when you first boot into SL, every one of your components should function properly. This includes your audio, 3D graphics, wired/wireless internet, power schemes and even bluetooth devices. I’ve used many distros, but none have matched the detection as seen here. There is a 90% chance that you will not need to configure anything. Booting SL on my laptop for example, it automatically setup my wireless, so I just had to select my network, type in the WEP key and I was good to roll. 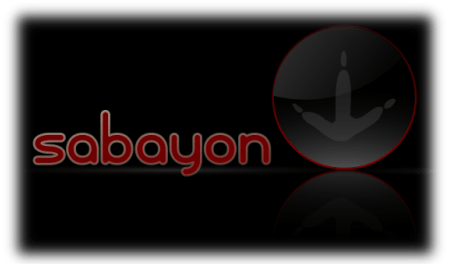 All that aside, 3.3 has numerous new features and updates that you should know about if you already use the distro. Here is the (somewhat) long list of new features. I wanted to skim it down a little bit, but almost every entry here will be of interest to someone.

Now that we have that out of the way, we can move on to see how well the latest version performs and what’s new.

Once again, the Live DVD is feature-packed and allows you to perform a lot of tasks without installing it to your hard drive. I didn’t include a screenshot, but the options at the boot screen are: Start SabayonLinux 3.3, Start without Music, Anonymous Internet Browsing, Start Graphical Installation, Start Text Installation, Play with Sauerbraten, Play with Coldwar (demo), Start in safe mode, Start in Console mode, Start in Internet Kiosk MX mode, Start GeeXboX Media Center, Start Freevo Media Center and finally, Debug mode. Most of these are shortcuts to begin an application after the desktop loads, but others are completely different, such as GeeXBoX and Freevo.

I focused primarily on the default option, which boots up the OS with music playing throughout the entire process. Those who are on the go a lot will find the Anonymous net browsing option to be of interest. It starts up Tor on boot, so all of your surfing will run through a proxy so as to retain an extra layer of security.

At the boot, you will have the option to change the parameters, which you -will- want to do unless you enjoy 1024×768. I booted with the “res=1680×1050” option, so that I would retain that resolution at the desktop. Any parameters you specify at the boot will be retained after the installation. For whatever reason, I still always have to boot with “noapic” on my AMD AM2 machine. It’s been this way with all recent Linux distros, not just SL. I am unsure why I receive this problem, but it might be the combination of hardware I have, as many who do use AM2 don’t have to specify that flag.

Once you begin the boot process, it will take about three or four minutes to reach the desktop, which looks like this. 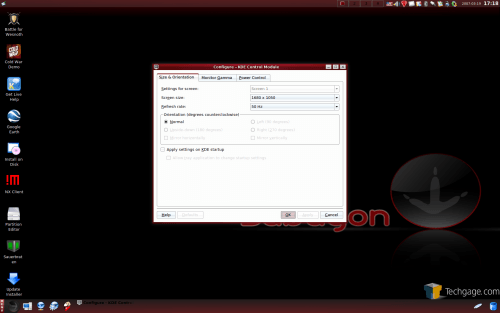 On the desktop itself you will find three games, live chat, Google Earth, installer updater and of course the installer itself. To get to this point, I did run into a few problems. I use USB audio on this PC as the primary device, but I have a sound card installed as well, which I plug headphones into directly. At the boot, Sabayon chose the sound card as the primary device. Not surprising, or something I could disagree with, since that’s the case most times. Under KMix, my USB audio was shown, so I knew that the snd-usb-audio module had been loaded into the kernel. However, whenever I tried to run alsaconf to set the USB as the default device, I received errors. In the end, alsaconf did not recognize the USB audio as it should.

I had this problem with Gentoo in the past as well. I forget which kernel modules I was missing, but it was fixed within a matter of ten minutes. I wanted to make sure the USB audio was configurable under Sabayon though, so I rebooted and disabled the on-board sound card in the BIOS. This time around, SL installed the USB audio no problem, and it worked fine. Just bear in mind that if you also use a USB device as a primary sound card, you may have to tinker a little bit inside the kernel or do what I did. You can easily install the sound card after Sabayon is installed and deal with it that way.

That "problem" was the only real one I had during boot. Everything else went fine, without issue. First introduced with SL 3.26, I believe this is still the only distro that implements SuSEs kicker, besides SUSE of course. For those who haven’t used it before, it replaces the KDE menu with one with more creative functionality. Just by looking, you can easily see how it works and how it differs from the official K menu. One of the best features is the search bar up top which helps you find the application you are looking for quickly. For those who dislike the new menu, you can just right click this one and click "Switch to KDE Menu". 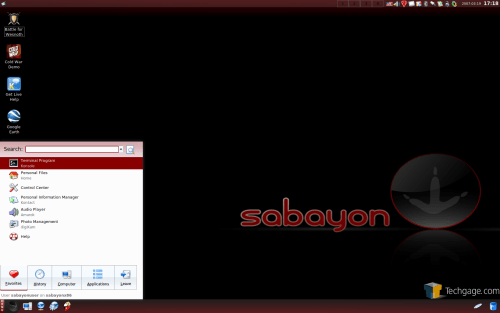 If you boot into the desktop and have problems, you will appreciate the "Live Help" icon. Essentially, this will bring you straight to the #sabayon channel on the freenode network. At any given time there is usually around 50 people hanging out in there, so chances are someone will be able to help you through your problem. 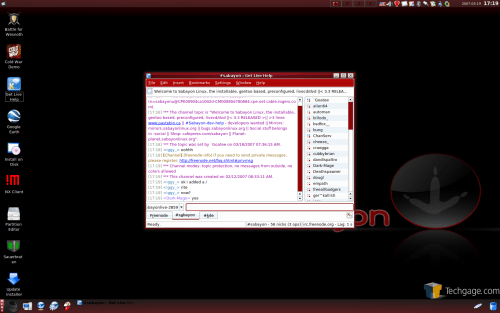 Before you ponder an install, you should open up the partitioner on the desktop to make sure everything is good. Originally, I had two Windows partitions, since this is all done on my benchmarking computer. I removed the second one since I didn’t need it anymore and formatted it to ext3. The installer will reformat it and partition it as it should be, while leaving all other partitions alone. If you have multiple Linux installs, you will need to be careful here, as the default action is to delete all Linux partitions off the drive. 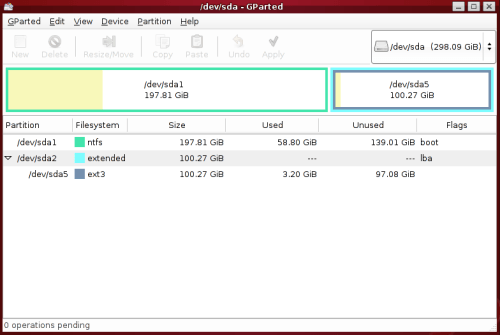 With that out of the way, let’s install.