Looking back just a few years, it’s hard not to laugh at the computers we were amazed over. By comparison, todays computers offer far more performance and overall features. Coincidently, as our computers become faster, our monitors become larger. Three years ago, I had bought a 17" ViewSonic CRT and was astounded. Glorious 1280×1024 resolution on a crisp, bright screen. Of course the monitor weighed half of what I do, but it certainly made games a lot more enjoyable.

Of course, 17" monitors are now in dwindling numbers among computer enthusiasts of all kinds. Larger monitors offer obvious benefits, such as gaming and movie viewing. Aside from those though, larger monitors with equally large resolutions offer you far more desktop space to deal with. If you live on a computer like I do, the extra space is welcomed.

Whether it be spreadsheets, HTML editors, Photoshop, Internet, IM or whatever else you might have, a larger monitor gives you more space to deal with so that you can look at everything at once. Even myself when moving from a 1280×1024 to 1680×1050 resolution, though not an extreme increase, I personally noticed a huge difference in my workflow efficiency.

At Techgage, we are just getting into the swing of reviewing monitors, so we welcome all comments and suggestions of what you’d like to see. I am not as well versed with monitors as some, but I take a realistic approach when testing and comparisons. We posted a review of Dell’s 2707WFP two weeks ago, which I will be using as my basis for comparison here.

If you are to purchase a large monitor, one would assume that you would have sufficient desk space. In my case, I am not one of those people with common sense so I stick to a modestly-sized desk. This is a benchmarking computer, so a small desk is all that is needed. That aside, this is a normal size desk for someone with lack of space, and you can see just how large this beastly monitor is in relation to everything else in the room. 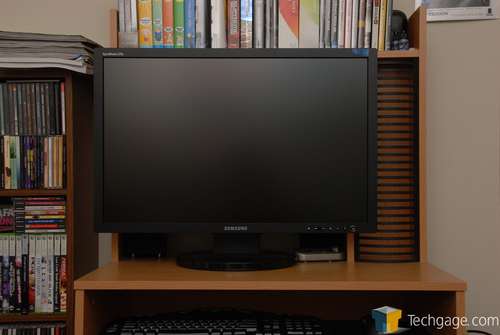 Like Dell’s 2707WFP, the screen is matte-like, not glossy like my ASUS PW201. This to me is a huge benefit, as long as the brightness doesn’t suffer. Glossy screens reflect any light source in a room, making it difficult to use during the day, especially a sunny one.

One thing that Dell boasts about their 2707WFP is that the back looks as good as the front, which is definitely the case. This is something that Samsung can’t brag about, but even still, this is not a shabby looking backside. It’s well ventilated to allow air to escape, which is welcomed since larger monitors can get quite warm. At peak, I have seen the hottest part of the monitor hit 47°C. 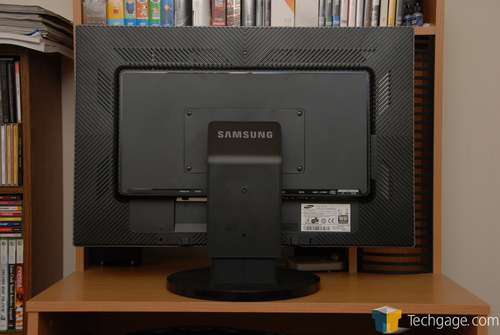 To get a better idea of the styling of the monitor, here is the top-right corner. Gray trim, but black everything else. 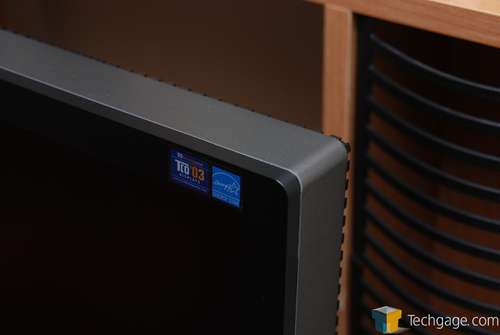 The controls are placed to the bottom-right corner, seven in all, most of which are self-explanatory. Auto is used in analog mode only, to attempt a re-align to make the picture fit the screen properly. As with any LCD monitor, using DVI cables is highly recommended. 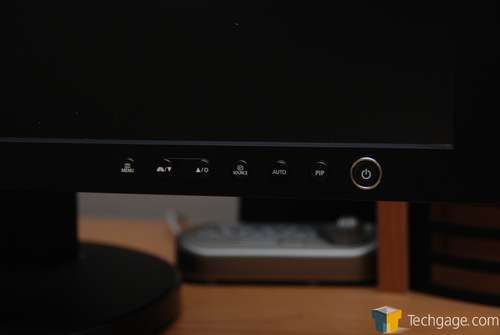 All of the main inputs are found underneath the screen, but the component and dual USB ports are found on the left side. 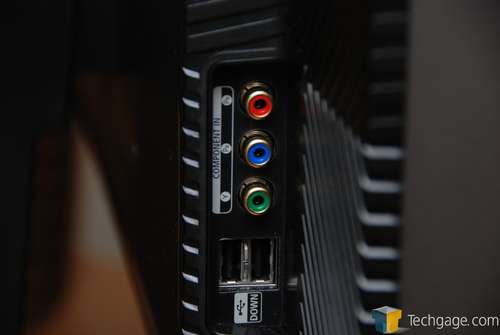 Taking a look underneath, there is a power switch along with the actual power port. At the bottom here is a Kensington security port. 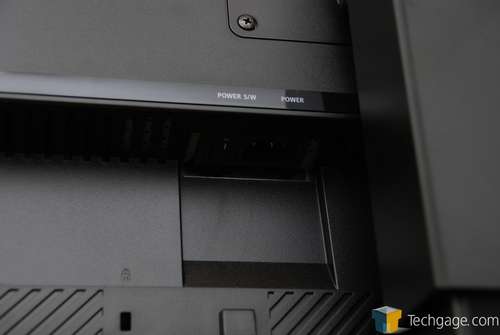 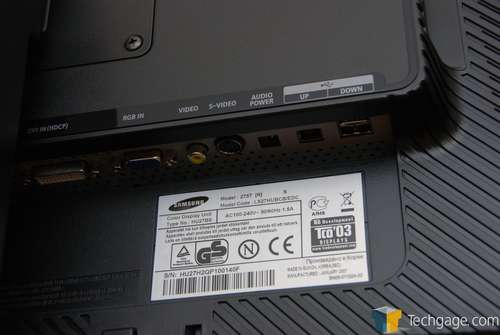 Overall I am quite pleased with the monitors design and styling. For whatever reason, I was becoming to find black trimmed monitors boring, since they are the most popular. Samsung has some great designers though, and they pulled off the styling nicely. It’s classy.