At the conclusion of my look at EVGA’s GeForce GTX 760 Superclocked a couple of weeks ago, I said that I’d be following-up to the article with another; one that pit the card against its closest competitor: AMD’s Radeon R9 280. As this article exists, and I’m not one to use misleading intros, you’d be right to guess that this article is that follow-up.

According to their suggested retail prices, AMD’s Radeon R9 280 and NVIDIA’s GeForce GTX 760 are priced the same: $249. However, as is typical of PC hardware, SRPs never last for long. At the time of writing, the least-expensive overclocked GeForce GTX 760 at Newegg comes from GIGABYTE, priced at $240. On the AMD side, Sapphire’s Radeon R9 280 Dual-X is priced at $230, or $210 after a mail-in rebate.

This should be a fun match-up.

With a launch price of $249, it’s not too hard to gauge where the R9 280 falls into place. Today, that price for a GPU means that it should be able to run all of today’s games at 1080p with high detail settings while delivering playable framerates. As a reviewer, I don’t expect many people to pick up a $249 GPU if they have 1440p in their sights, but I do love it when cards of that price-range manage good framerates in at least some games at that resolution. Fortunately, both AMD’s R9 280 and NVIDIA’s GTX 760 are able to deliver there (as can be seen on the Best Playable page later in the article). 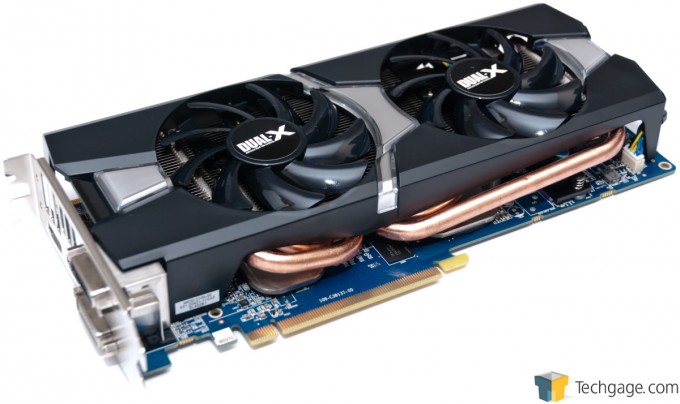 One thing that’s synonymous with special edition cards like the Dual-X is that they’re overclocked; this card is no exception. However, given the fact that the R9 280 reference clocks are 827MHz Core and 5,000MHz Memory, the jump here seems minimal: 850MHz Core and 5,000MHz Memory – that’s right, the memory is left alone. The boost has also been, well, boosted, from 933MHz to 950MHz. You can expect the card to run at 950MHz more often than not while gaming, as long as temperatures don’t become an issue (as we’ll see later, that should never be the case).

Four video ports can be found at the back of the Dual-X: 1x HDMI, 1x DisplayPort, and 2x DVI. 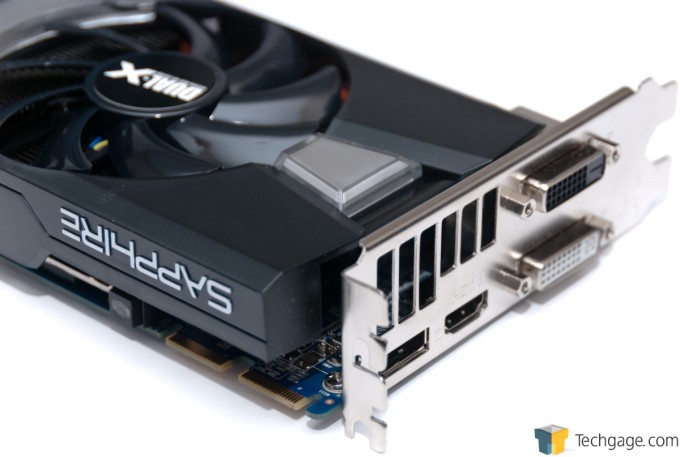 At the opposite end of the card we find 2x 6-pin PCIe power connectors, which is more than enough to handle the spec’s 200W TDP. It’s worth noting that NVIDIA’s GTX 760 has a 170W TDP, so it’ll be interesting to see if that power difference is reflected later on – especially in temperatures, since both cards use dual-fan solutions. 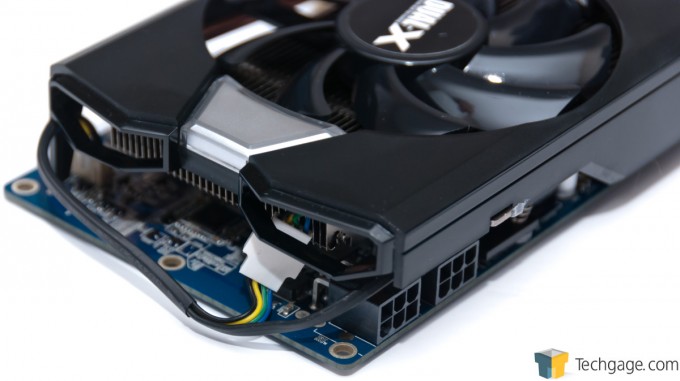 Not pictured, Sapphire includes a couple of different items in the box: Documentation, driver CD-ROM, 2x Molex-to-PCIe adapters, and a CrossFire bridge.

When you’re looking to purchase a GPU at a given price-point, it’s sometimes useful to consider the models directly above and below it. After all, you might be able to save a lot of money for a card that doesn’t perform much worse at all, or vice versa. In the case of the R9 280, though, it’s placed “too well”. The R9 270X, for example, cuts 33% of the cores – and that to me just puts it out of the running when the intent is to get a great-performing 1080p card. On the other side of the coin, the R9 280X bumps the cores by 15% and the boost by 7%, but it also costs at least $60 more.

For its price-range, it’s hard to beat the attractiveness of the R9 280. So with that said, let’s see how it performs, with the help of Sapphire’s Dual-X.