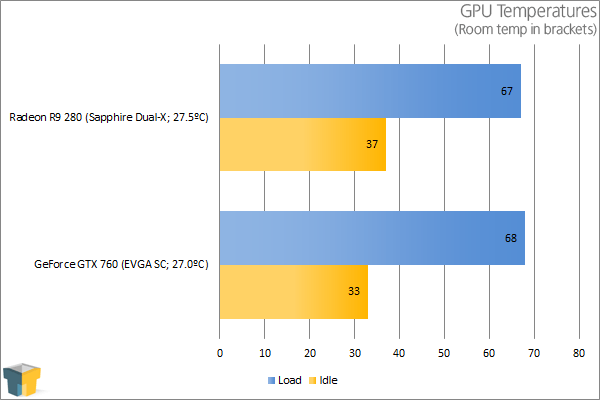 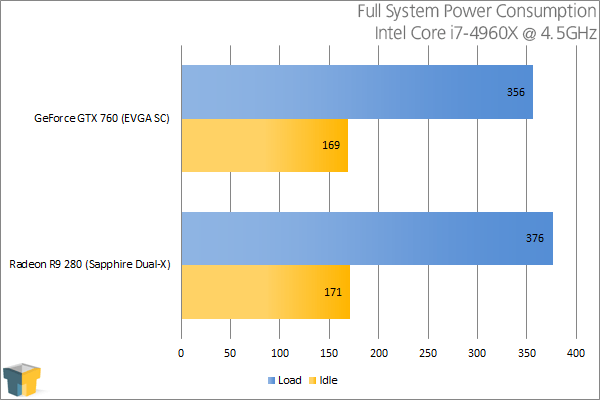 Lately, AMD’s cards tend to run hotter than NVIDIA’s on average, but with Sapphire’s robust Dual-X at-the-ready, the R9 280 matches up well against EVGA’s ACX. The AMD card ran 4°C warmer at idle, but as the lab was a bit warmer (beyond the 0.5°C, the air was just heavy), that could be the reason.

As seen throughout our results, Sapphire’s R9 280 Dual-X edges out EVGA’s GTX 760 Superclocked on the performance front, although the gains are modest – it’s not as though one card should move up or down a tier. The GTX 760’s biggest gain was seen on the power draw – it sucked 21W less out of the socket. That’s notable, but not something most enthusiasts are going to take into consideration – and I’ll be honest, I wouldn’t either.

So what are we left with? Pricing, of course. At the outset, I mentioned that the least-expensive GTX 760 available on Newegg comes in at $240. EVGA’s Superclocked, used as the comparison card for this article, can be had for $250. On the AMD side of things, Sapphire’s Dual-X can be had for $230 – and for what it’s worth, that’s before a $20 mail-in rebate. Over the past two weeks, I’ve monitored pricing around the Web a bit, and I’ve on occasion seen other R9 280 models dip even lower, whereas I didn’t find a GTX 760 card that dipped to the same level. 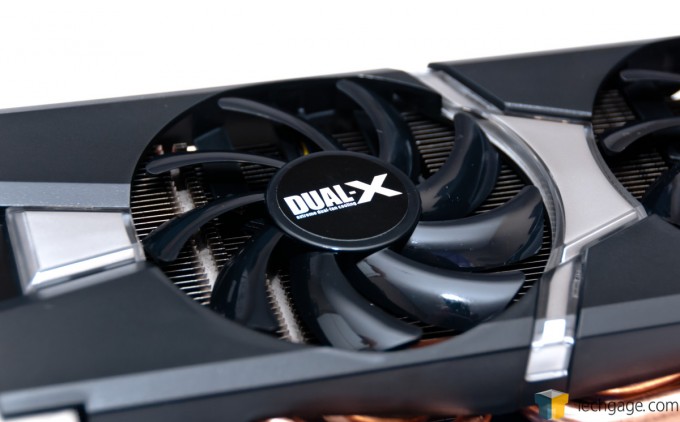 Outside of all that, one thing I found interesting in this battle is that EVGA’s Superclocked GTX 760 has quite an impressive overclock over reference (1072MHz, vs. 980MHz), while the boost Sapphire gave its Dual-X card is paltry (950MHz, vs. 933MHz). Due to an overwhelming workload, I was unable to overclock Sapphire’s card, so I’m not quite sure how far it’d actually go.

Beyond pricing and performance, there’s an argument to be made when comparing the featuresets of AMD’s and NVIDIA’s cards. I’ve spent a lot of time looking around at comment sections these past few months, and it’s been hard for me to see that either vendor’s featuresets are causing people to choose one over the other. That said, on the NVIDIA side, I greatly appreciate ShadowPlay game recording, though it must be said that AMD has a competing solution which I didn’t even find out about until last week (and have yet to test). NVIDIA has GeForce Experience, and AMD has Raptr. It’s tit for tat, for the most part, and a subject I’d like to delve deeper into in the future.

As it is, with the current pricing of these cards, AMD’s offering a very attractive deal with its R9 280, and likewise, Sapphire has got a winner with its Dual-X as far as I’m concerned. Its cooler kept the card just warm at full-load (keeping up to the performance of EVGA’s ACX), and it was quiet, to boot. Again, be sure to shop around if you are looking at either card, because price fluctuation can make or break a deal, but as it is, AMD’s R9 280 is a fantastic offering.