Believe it or not, despite the HD 4890’s launch last month, the HD 4870 is still totally relevant, thanks to ATI’s current pricing structure. There’s a card for every budget, and if you’re willing to spend around $180, you can get hooked up with a 1GB version of the card we’re taking a look at today. It’s silent, keeps cool, and still delivers great performance for the money.

With ATI’s launch of the high-end Radeon HD 4890 card happening just last month, it may seem a little odd that we’re taking a look at the older HD 4870 card now, but for the most part, it’s not. The HD 4890 is still priced comfortably above the HD 4870, by about $40 on average, and even though the HD 4780 came out about ten months ago, it still has the brawn needed to power all of today’s games with relative ease.

One common thing to be said in most of our GPU content is that the best time to buy a GPU is now, and that’s been the case for a while. It used to be that you’d have to unload your wallet to get a decent graphics card, but nowadays, most people will be happy with a $150 offering, especially if they’re running a resolution of 1680×1050 or lower. Really, the best bang for the buck is with any current GPU offering. It’s hard to go wrong.

The best thing about the current state of graphics cards is that there’s a price-range to suit every taste possible. For budget gamers, there are numerous models under $100, and in some cases, well under $100, and then we have cards at $125, $150, $175 and upwards. The good thing is that most scale well with their price, so any card you pick up should give you exactly what you paid for.

The HD 4870 we’re taking a look at here isn’t just a quick release, but rather features a unique “Vapor-X” air cooler that’s been designed from the ground up to deliver the best cooling performance with the lowest noise, and after having dealt with the card, we can say there is a vast improvement between this and a reference card (so, no more sporadic 100% fan speedups!). But before we take a look at the card itself, let’s review the current state of ATI’s line-up:

The HD 4870 proves to be one of the overall best choices for gamers right now, especially for those who crave anti-aliasing. It offers a sweet blend of high clocks, lots of memory and most importantly, an under-$200 price tag. But before we go further, I have to point out that the card we’re looking at here is a little unique, because it features 2GB of GDDR5 rather than 1GB. What will that premium cost you? About $45 over the 1GB model. Ouch.

Even without testing the 1GB model, I can honestly say that you should save your money and stick with the much more affordable 1GB card, because let’s face it, for the price of the 2GB, you might as well get yourself hooked up with an HD 4890 1GB. From a gamer perspective, that just makes much more sense. Plus, from the HD 4870 standpoint, this is a GPU that’s unlikely to take advantage of 1GB+ in any title, so just skip it. That’s not to say we won’t have a need for 2GB in the future, but chances are good it will be put to better use on higher-end models, that can both handle higher resolutions and higher anti-aliasing modes.

As you can see in the photo below, the cooler for the most part looks rather generic, but underneath is a massive copper base that covers the entire area of the GPU core socket, allowing for fantastic coverage. On top of this copper base is a typical finned heatsink designed to dissipate heat quickly, while the fan’s job is to blow the hot air towards the back. 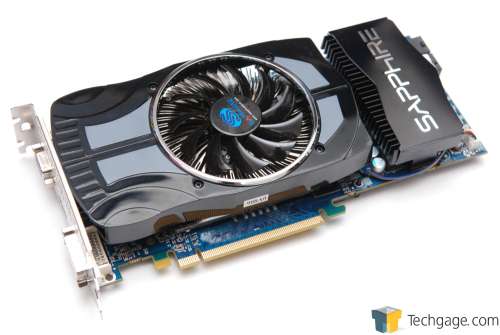 The entire cooler is shrouded to prevent the hot air from escaping and getting into the main chassis, and the overall design directs it towards the back, to escape through the back of the case. Taking a look at the below photo, you can see that the opposite end of this shroud is covered. 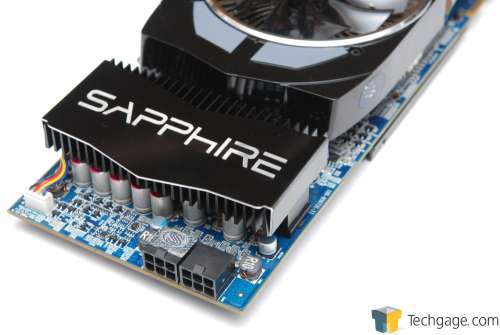 Also on this side, you can spot the two PCI-E power connectors, and also the somewhat large Sapphire-branded heatsink that sits atop some of the card’s MOSFETs. This heatsink is passively-cooled. Finally, on the back you can see yet another heatsink which covers the card’s GDDR5 in its entirety. 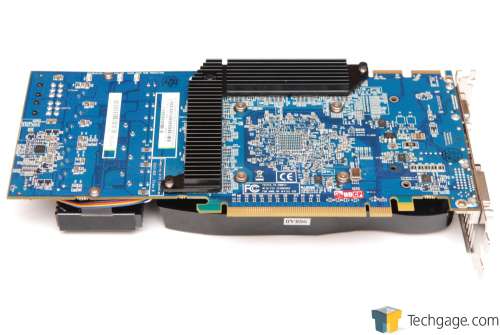 Although not pictured, this card features three connectivity options: 1x VGA, 1x DVI and 1x HDMI, so all of the current bases are covered. Overall, I like the design of this card, not really for its looks, but for the thought that went into it. This cooler isn’t designed to see the best possible temps, but rather its goal is to see the best possible temps while keeping quiet, and that’s something we’ll test out shortly.