Some say that the speed of advancing hardware has slowed down, and while that may be true in some cases, graphics card technology is advancing at a fast rate, and it’s proven with AMD’s most recent offerings. It’s hard to not feel excited when using an HD 5870, because as mentioned earlier, given the fact that the 5000 series is essentially 2x the performance of the previous generation, there’s so much power to be had, so what’s not to love?

Throughout all of our tests, both the reference HD 5870 and Vapor-X model conquered the charts, only to be surpassed in performance on occasion by NVIDIA’s GeForce GTX 295. That card isn’t entirely new, and costs $100 more, and coupled with the fact that it runs much hotter and gobbles down far more power, it’s not a sensible choice in today’s scheme of things. The general idea to take away from this is that the HD 5870 is a truly awesome card, and for the money, it offers quite the bang for the buck.

Sapphire’s Vapor-X continues this awesomeness by decreasing the overall noise, improving upon the temperatures, and boosting the clocks just a smidgen. The clock boosts really aren’t anything to focus on, though, since they’re so minor. But when you combine all these things together, the $20 premium that Sapphire asks for seems rather moot. This isn’t even taking into consideration that not one, but two free games (Battlestations Pacific and Dirt 2) are bundled in the package. 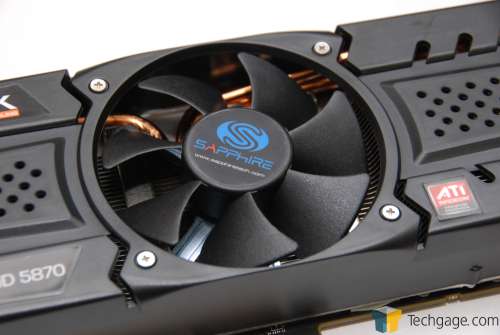 The HD 5870 in general is a great card, we’ve established that, but is it the card for you? That depends. As seen in our results, the performance delivered is rather incredible in every single game we tested with. The HD 5870 became the first single-GPU card to handle Crysis Warhead with the Gamer profile at 2560×1600 and keep those settings for our “Best Playable” section. But, that’s at 2560×1600, and most gamers aren’t running that quite yet.

For gamers using a resolution of 1680×1050 or lower, the HD 5870 is extreme overkill, so it shouldn’t even be considered. Instead, the HD 5770 which we took a look at earlier this month would be a perfect fit, as it offers all of the perks of this card, just with lower performance (not to mention a less-than-half pricetag). Even at the beefier resolution of 1920×1080, the HD 5870 barely breaks a sweat in most titles.

That’s not to say that gamers who use resolutions lower than 2560×1600 can’t make use of an HD 5870, because that’s not really the case. In all of our tests, we focus on using 4xAA for the most part, but for people who want to go beyond, this card could definitely make better use of the additional AA over lower cards. But, one important factor to keep in mind is that the HD 5870, as fast as it is, only features 1GB of GDDR5, so there will be limitations. For AA above 4xAA, a 2GB card would be ideal, but to date, I don’t think any GPU vendor has released an HD 5870 with that much memory equipped.

For those who want the best possible GPU for the money right now, the HD 5870 is hands-down the winner, and Sapphire only improves on the best with its Vapor-X, which proves itself to be well worth the $20 premium, and as a result, earned itself one of our Editor’s Choice awards.