This past April, AMD helped fill the Radeon HD 6000 series mainstream void with the HD 6790. Compared to the HD 5770 it was essentially succeeding, I felt the card should have been called HD 6830, as its architectural benefits clearly separated it from the HD 5700/6700 series. Nonetheless, there did exist an HD 6700 series at that time, though it was OEM only.

As the title of this article suggests, that’s no longer the case. At some point over the past couple of months, AMD decided to allow vendors to release both the HD 6750 and HD 6770 cards to the public, which now gives us a total of seven mainstream and higher HD 6000 GPUs to choose from, ranging from $100 – $700.

The Radeon HD 6770 we’re taking a look at here today, courtesy of Sapphire, retails for about $140 USD, whereas ordinary models retail for closer to $120. Encompassed within that $20 premium is a custom cooler and the ability to run Eyefinity (3 monitors) right out of the box thanks to its inclusion of an active DVI to HDMI cable and a built-in DisplayPort chipset.

But let’s not jump too far ahead of ourselves… what about the reference HD 6770? What does it offer here in relation to the HD 5770? Ah, it’s times like these when I just love writing about something, because I can feel lazy yet efficient. The answer: nothing. Well, unless you want to count the name change, which I guess is something.

If HD 6700 == HD 5770, then what’s the point? Also easy to answer: marketing. For the sake of it being easier to sell a “current” model than a last year model, the simple change had to be made for the sake of OEMs. And, it seems the same mentality carried over to the consumer market as well. Currently, Newegg lists very few HD 5770s, and all share the same pricing as the HD 6770.

Like the HD 5770, the HD 6770 is a Juniper XT, built upon a 40nm process and consists of 1.04 million transistors. It features the same number of cores as the HD 6790, though because that card has a wider memory bus, the performance still lies in its favor.

As mentioned before, Sapphire’s “FleX” edition HD 6770 features a non-reference cooler and includes a DisplayPort processor on-board that negates the requirement for a DP monitor in the event you want to go with a 3×1 configuration. For those with older or budget displays that don’t feature the connection, this feature is a hugely welcomed one. 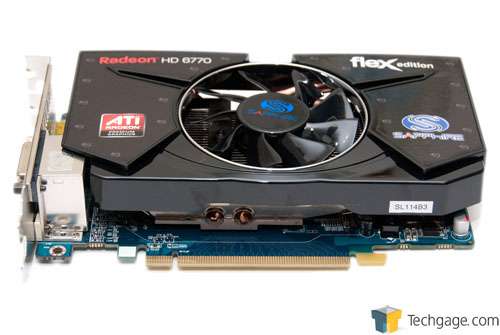 At the back of the card are dual DVI ports, and HDMI and also a DisplayPort. If you’re planning to go with an Eyefinity setup, you can use both DVI ports here as normal, and plug the third DVI monitor into the active cable Sapphire has provided, which then plugs into the HDMI port. 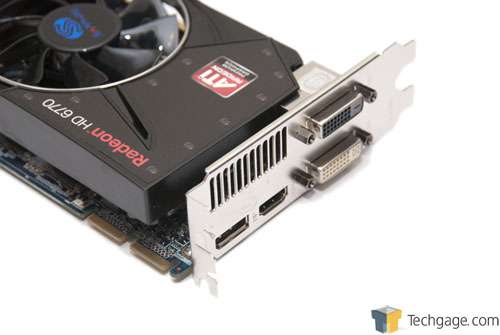 Do I see an ATI logo on this card? Tsk tsk, Sapphire. Well, let’s be fair… AMD still hasn’t totally removed ATI branding from its own GPU driver, so I guess we can’t pick on Sapphire too much.

As the HD 6770 isn’t any different than an HD 5770, nor is this card overclocked, we can already take a guess at how the card will fare in our results ahead. We recently removed the HD 5770 from our charts due to the fact that they were getting too large, but we can still compare the card to the slightly more expensive HD 6790.