We took a look at Sapphire’s Radeon HD 6870 Vapor-X a couple of weeks ago; a reference-clocked model that aims to deliver far improved cooling and noise-levels and also one that proves a breeze to overclock. Overall, we were quite impressed with Sapphire’s offering, even going as far as to award it with one of our Editor’s Choice awards. Can the company’s “FleX” manage the same?

Similar to the Vapor-X, the FleX also comes replete with a custom cooler and in effect aims to deliver better acoustics and temperatures than a reference card can manage, but in addition, it’s also designed for those who want to power more than one display, taking full advantage of what AMD’s Eyefinity technology has to offer.

Sapphire markets the FleX as being built for Eyefinity for a couple of reasons. First, the company includes a couple of adapters in the box that will help make setting up a 3×1 configuration easier. Because the HD 6870 supports just 2 native DVI ports, Sapphire makes it easy to add a third by including an HDMI to DVI passive adapter. 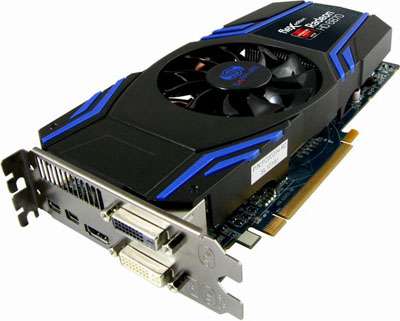 “But wait…” you may ask, what about the requirement for a single DisplayPort connection to power any of the available Eyefinity setups? That’s the second thing that makes this card special. Rather than bundle in a separate active DisplayPort adapter, Sapphire instead built the card with that functionality built in. In essence, an on-board DisplayPort chip splits off its available bandwidth to two different DVI ports, allowing gamers to hook up one of their DVI monitors using the DVI to HDMI adapter.

This implementation without question is a good one, but you may ask why AMD doesn’t implement the same kind of functionality for all of its reference cards. Well, I’d say there’s one single good reason for it. AMD might be proud of its Eyefinity technology, but it’s clear that the number of people who use multiple displays for gaming is painfully low. Thus, it wouldn’t have been cost-effective to include what’s surely a $10~$15 chip on every single card. Fortunately, for those who could still use that kind of functionality, Sapphire has come to the rescue.

Before moving on, let’s take a quick look at AMD’s current fleet of graphics cards:

Thanks to AMD’s big launch of the dual-GPU HD 6990 last week, the table of HD 6000 series cards has grown to five. The HD 6870 we’re looking at today still sits nearly at the bottom of AMD’s current line-up, but as we’ve seen in the past, it’s far from slow, and given Sapphire’s push on its FleX being able to easily power a 3×1 display configuration, that in itself speaks volumes. 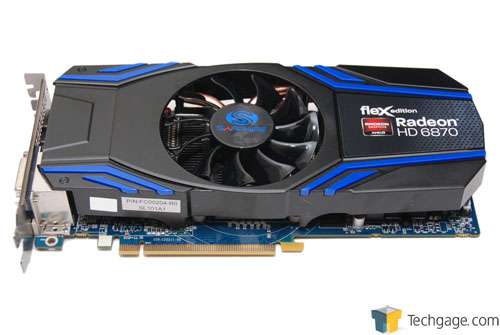 The FleX’s cooler is nearly-identical to the one seen on Sapphire’s own Vapor-X, but I tend to like the aesthetics of this one better. But to be fair, it doesn’t take much blue to win me over. 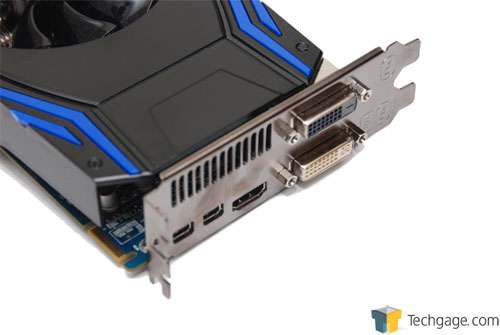 On the back of the card are 2 x DisplayPort ports, 2 x DVI ports and 1 x HDMI port. For the recommended 3×1 display configuration that Sapphire recommends, both DVI ports and the lone HDMI port would be used. If you don’t have a display that includes an HDMI connection, you can rely on the included DVI to HDMI adapter included in the box. 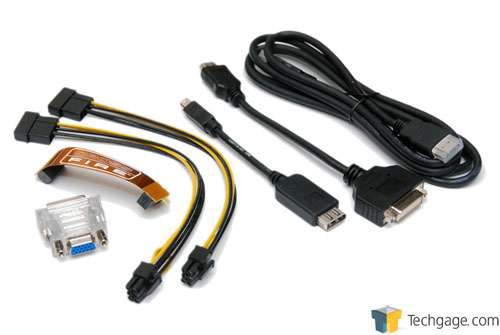 The second cable from the right is the included DVI to HDMI cable, while the one to the rightmost point is a 1.8 meter HDMI cable, and the one in the middle a mini-DP to DisplayPort adapter. Also included in the box are 2x 4-pin Molex to 6-pin PCI Express power adapters, a VGA to DVI adapter, a CrossFireX bridge and also a manual and CD-ROM (not pictured).

We’ll take a quick look at our test system and testing methodology on the following page, and then get started on our results with the help of Colin McRae: Dirt 2.