A little over a month ago, amid the heat of the competition, AMD announced that some of its partners would be releasing pre-overclocked versions of the company’s Radeon HD 6870 cards. One of these cards came from Sapphire, in the form “Toxic”, but at around the same time, the company also released something with a slightly different flavor… the “Vapor-X”.

Vapor-X is no stranger to those who’ve been following Sapphire for some time, as the company prides this version on being the most efficient on the market. We’re not talking just about speed here, but far improved cooling ability and sometimes even better power consumption. Unlike the Toxic, the Vapor-X HD 6870 is not pre-overclocked at all, but that shouldn’t matter.

The Vapor-X targets those who want the best possible version of a particular card, and most often, that doesn’t mean it has to be the fastest. Instead, such a card should keep temperatures low, and remain reliable for years, and that’s exactly what Sapphire strives for here.

Here’s a quick run-down of AMD’s current fleet of products:

Given the quick roll-out of the HD 6900 series that launched not long after the HD 6800 series, it seems that AMD might be taking its time with getting its other mid-range models ready – or also the HD 6990 dual-GPU card. As it stands today, the HD 6870 caters to the mainstream gamer who’s willing to part with ~$200 to get top-rate performance. Currently, NVIDIA doesn’t have a current-gen (as in 500-series) card to compete with this one.

After the HD 6800 series launch, Sapphire followed-up to its originally-launched card with other models featuring improved coolers, and on the surface, all look quite similar. The Vapor-X, however, has a greater focus on cooling-ability. 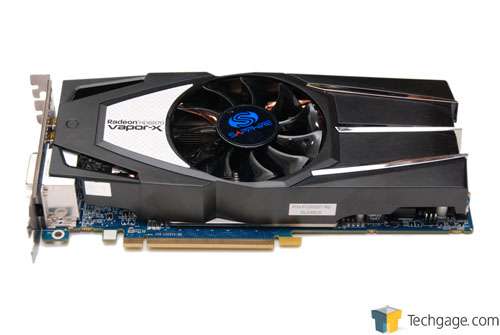 The premise of Vapor-X is that similar to heatpipes, a liquid is heated and vaporized and recycled to go through the loop again. This is an effective way to dissipate high temperatures, as is proven by the sheer popularity of heatpipe technology. Not surprisingly, Vapor-X cards are designed to offer superb airflow and modest noise levels.

Like the other HD 6800 cards, this one includes two DVI ports, an HDMI and two mini-DisplayPort. Up to six monitors can be used off of a single card with the help of DisplayPort extenders. 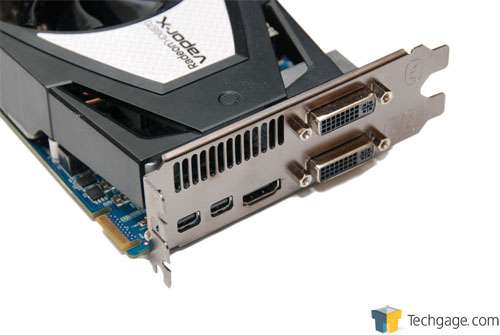 As the Vapor-X model from Sapphire is a stock-clocked offering, we’re not going to expect many differences in performance here, although there is about four months worth of driver updates we’ll be testing with compared to our launch results, so we’ll see if anything has improved in the games we test since then.