Heat is the enemy of any electronic component and most especially the CPU. If your CPU is overheating you won’t get the performance you should and if your cooler is screaming to relieve that heat you’ll wish there was a better way. Today we look at a cooler that offers good performance without mind numbing noise, the Scythe MINE.

There are certain areas I tend to focus more on when it comes to my PC. One of these areas is cooling.

A hot PC benefits no one. It affects the performance of the PC and if left unchecked, overheating can decrease the life of the component itself. I don’t like heat and in saying that, neither should you.

There are ways to combat this problem however. Air cooling is the most simple, and for the most part, the cheapest way to keep your PC cool. When you purchase a processor, an aluminum heatsink is always included. While this approach will work, there are certainly better products out there. One such product is the Scythe MINE cooler. This cooler can be used for Intel and AMD processors alike on sockets 754, 939 and 940 for AMD and 478 and LGA 775 for Intel.

Scythe was founded in 2002 in Tokyo, Japan. In 2004, Scythe opened shop in the United States and has been in LA ever since. They focus on the do-it-yourself types and have done an admirable job thus far.

Now, on with the review!

The MINE cooler came in a colorful box labeled in both English and Japanese. The box is informative and to the point. 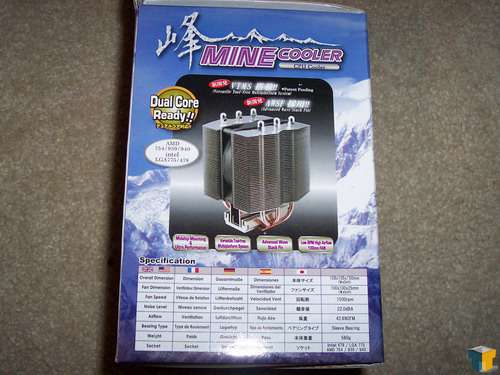 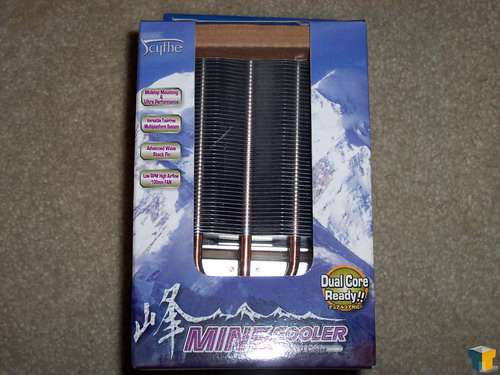 There you have the box. Let’s see what it looks like out of the box. 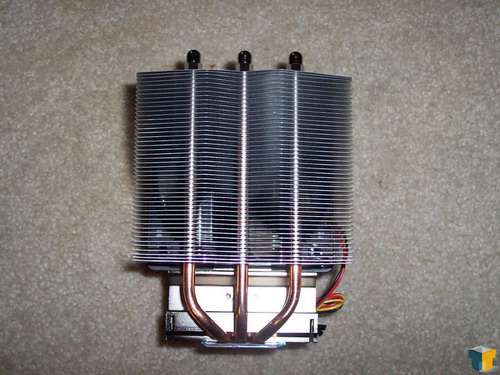 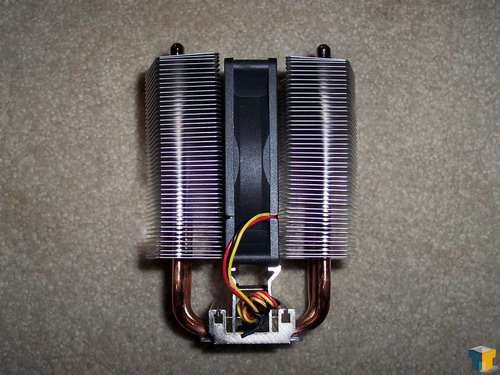 My first impressions were basically astonishment of the sheer size of this cooler. The damn thing is huge! There are 3 heatpipes that run up either side of the cooler and through the fins in the heatsink. As you can see, there is a 100mm fan in between the two stacks of fins that pulls cool air in over one of the stacks and then blows the air out across the other stack of fins.