The benefits of building a small PC are easy to understand, but what’s not always easy is finding an ideal case to store all of the components in. Well, for those looking for something a bit different, SilverStone has its Fortress FT03… an offering that must be seen to be appreciated. It’s a tower, yet small, and has huge aesthetic appeal.

Windows is allowed to sit idle for 10 minutes after startup to ensure all services are loaded before recording the idle CPU and GPU temperatures. CPU load temperatures are generated by performing a 20 minute run of OCCT LINPACK using 90% of the available memory. LINPACK is a personal favorite of the Techgage staff because it stresses the processor more than other applications, which translates into greater heat output. GPU load temperatures are also generated by running OCCT’s built in test for 20 minutes.

Stock CPU settings were obtained by using the “Load Optimum Default” option in the motherboard BIOS and the maximum overclock frequency of 4.2GHz was obtained after extensive testing to ensure stability. The VCore has been raised to 1.328V and the memory run at 1.35V at 1520MHz. This is the closest to stock that is allowed by the multiplier and since heat output from memory is negligible, running them like this helps to ensure system stability based on previous testing.

The final clocks on the GPU were 1020MHz on the core and 1200MHz for the memory with a +0.025V increase using Sapphire Technology’s TriXX overclocking utility. As with the CPU overclock, testing was done prior to ensure full stability.

The FT03 performed very well and was able to help cool each component well below the point of failure, even without one of the included fans. Granted, the components used in the test are not known to be power hungry infernos but I have been able to push them beyond this point in a traditional case with front to back airflow.

One issue that cropped up during testing was that leaving the GPU fan set to auto was not enough to keep it from crashing repeatedly, even though it ran fully stable in the previous case. The temperature topped out at the maximum of 93 degrees and the reports had the fan reaching 48% of full speed. After the system was reset, the fan speed was manually increased to a constant 50%, resulting in a completed run. This should not have been enough intervention to affect the final numbers but I wanted to keep the fan speed as close to what the auto setting determined was acceptable to keep from skewing the data.

Since this is my first case review and the final components for our test system have not been finalized, this chassis will be tested again and added to a growing list of results.

Like always, there are some issues that need to be mentioned. The first had to do with one of the rubber feet pulling away from the body when the case was slid a very short distance during the installation. The feet are connected to the chassis by a screw with a large head that is fed through the center of the foot itself. This clearly is not enough to ensure they stay attached but I was able to remove the screw and reattach the foot. 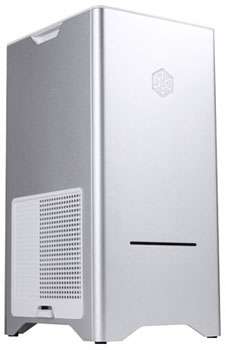 The second issue is that the bottom filter for the power supply and optional 92mm fans would come off with a light bump or brush. The method with which is it held in place is great since it means users no longer need to set the case on its side to remove it, however I would like to see stronger magnets used or more of them.

To some, the price could be considered steep at $165 CDN / $170 USD, but you get what you pay for; a solid case with tons of features. The styling greatly appeals to my less-is-more personality. On the outside it simply looks like a high-end workstation case or a HTPC, but on the inside, there is tons of room for high end components. There are even some pictures that show a Prolimatech Megahalem installed, and SLI or Crossfire could also be an option depending on the PCI-E slot spacing on the motherboard along with the specs of the coolers on the cards. Top that off with enough airflow to keep on overclocked system within acceptable limits thanks to a fresh internal design and near silent fans.

So with that said, the wait was certainly worth it but if you will excuse me, I need some alone time with this case.