There really isnâ€™t a lot to our testing to be honest. We install everything, record the temperatures at load and at idle. As a rule, we try our best to keep ambient temperatures as close as possible between tests as well.

With that out of the way, the hardware used is:

With a front mounted 120mm fan, as well as a single 120mm fan in the back, SilverStone has followed the standard cooling methodology for a case of this size. The hard drive cage is designed as well to allow as much air from the front fan as possible and while the more drives added to the cage will restrict airflow, there was adequate air fed to the Zalman 9700 with our two drives installed. This is no doubt a result of the placement of the drives, opposed to the Zalman GT1000 case that had the drives rotated 90 degrees and their backs facing away from the motherboard. This resulted in a little better air flow and ultimately, a little better CPU temps.

It should be noted that we did not do any GPU testing as the only card we had on hand that would fit was our x1650 Pro. The x1900 XTX and 8800 GTS were both too long and could not be used without relocating the hard drive cage, an issue we spoke about earlier in the review.

Looking back on our experiences with the SilverStone KL01, the feelings we walked away from the review were mixed. On one hand, the KL01 is a superb mid tower chassis for anyone building a machine on a budget. The looks of the case are top notch and the overall feel of the case was a solid one.

On the other hand, there where a few things that were clearly overlooked. The most notably was the SATA port issues. This might have been an issue SilverStone knew about, and quite possibly played the odds that most users would not have a board with rotated ports. After all, the cage doesnâ€™t complete block them all and we were able to use two of the six available on the abit board.

On the other hand, when 66 percent of the SATA ports on a board are blocked, itâ€™s not something that can really be over looked. We should mention that we tested the KL01 with another motherboard, a DFI 975 X/G Infinity and it worked perfectly fine. With that said, it would be irresponsible of us to recommend this case to any user with a board that has rotated SATA connections. 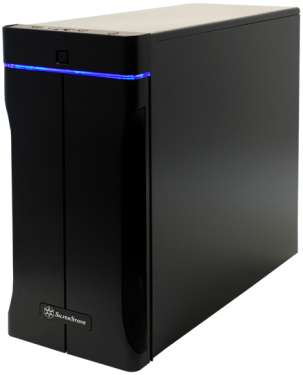 The cooling of the case was a strong point for the KL01 as well. The dual 120mm fans working together provided adequate air for the Zalman cooler and the front fan power connectors was definitely a favorite for us while testing.

SilverStone claims that the Kublai series of cases are descendants of the Temjin series and in many regards; we can see this claim as fact but there are a few issues that I would like to see not associated with the stellar Temjin lineup.

Issues aside, the SilverStone Kublai KL01 earns a 7 out of 10. Itâ€™s not a bad case. On the contrary, itâ€™s a rather good case that could be great if a few issues are taken into consideration the next time SilverStoneâ€™s engineers sit down to design the next Kublai chassis.