I know that you’re looking at this and wondering "What the hell?" but I wanted to show just how thick the materials are on this case. The dive bays are made from fully 2.0mm thick aluminum as is the case roof and floor. The edges aren’t covered but they’re not even remotely sharp, you’d be more likely to cut yourself with a mallet. 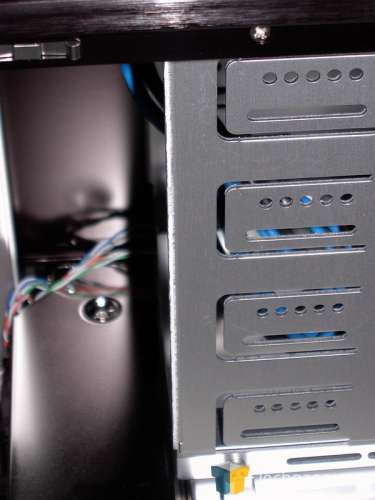 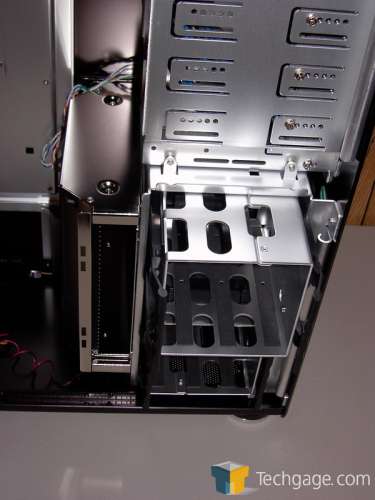 The drive bays are held in with a pair of plastic arms that lock into the drive bay. This is as close to "tool-less drive bays" as you’re going to get. The drives themselves screw into the cages. 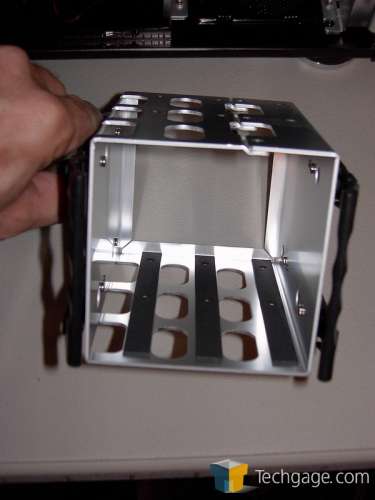 As you can see, the drive cages are also made from the same thick material and feature thin rubber strips where the drives make contact with the cages. This is to help dampen any vibrations the drives might transmit to the case. The drive cages hold three drives per cage for a total load out of 6 hard drives. Also you’ll note that the drives stand vertically on edge. I’ll show you the whys and wherefores of this in a second. 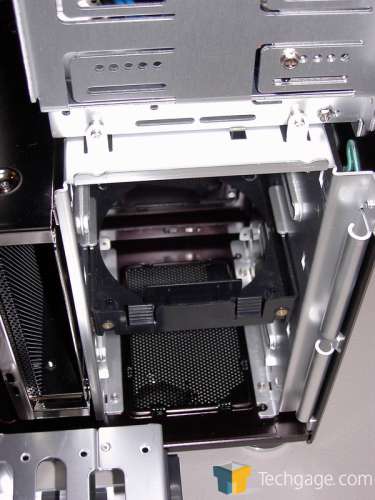 In between the drive cages resides a fan mount for an optional 120mm fan. This allows the fan to blow and draw (ha, I bet you thought I’d say "suck" didn’t you.) air through the drives. This is why the drives mount on edge and is why there are slots in the roof and floor of each cage. There’s also a meshed grill in the floor of the case to allow the air to flow into or out of the drives depending upon the orientation of the fan if you choose to use one. 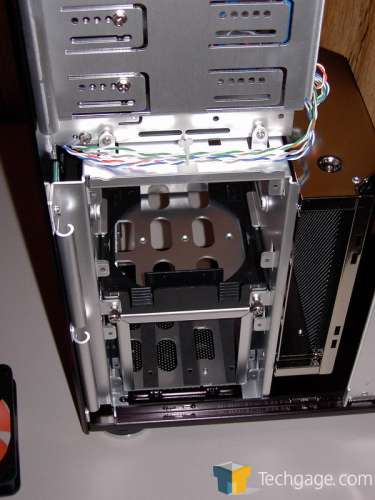 The fan holder is held in place by a pair of thumbscrews. You simply remove them and slide the fan holder out of the case and install the 120x25mm fan of your choice. 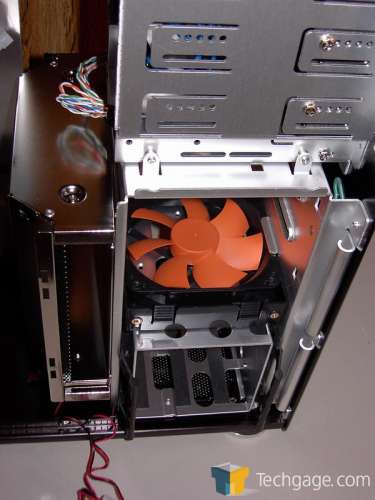 In this case (no pun intended) I went with a low RPM 120mm fan by Thermaltake since it’s nearly inaudible. I set the fan to draw air from the top and exhaust it out the bottom, I think that with the grill in the case floor this is the best option but that’s just me. It also prevents as much warm exhausted air from being drawn in by the front intake fan. 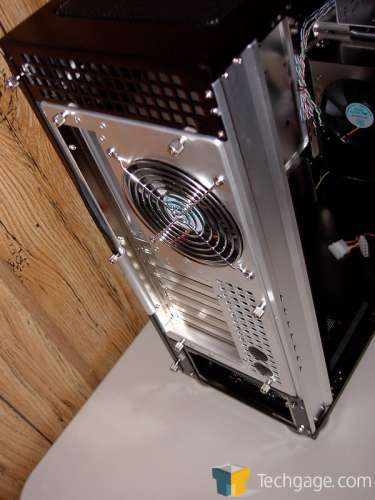 The removable motherboard tray is held in by five thumbscrews. On the left side (as you face the rear of the case) there is a handle to give you something to pull the tray from the case with. As you can see this handle curves in towards the the PCI slots, in my experience with this case it makes attaching a DVI to VGA adaptor to a video card a true pain in the posterior. I think a better design would to have it come straight out from the tray and simply curve left rather than curving inwards. 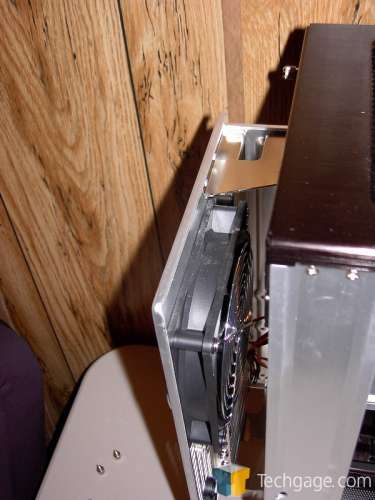 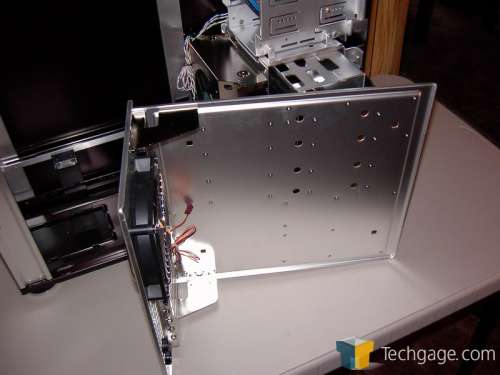 After removing the thumbscrews and pulling the tray outwards you can see that this thing is built heavy enough to serve as an Olympic diving board! The corners are braced at the top and bottom with heavy gauge steel gussets and the tray is built from the same 2.0mm thick aluminum that finds it’s way throughout the rest of the case. In fact, everything but the front and side panels are 2.0mm thick.

The side panels look to be .75mm thick as they’re just a bit thinner than the side panels on a Lian Li but they’re very durable. I’m guessing that they’ve had some sort of heat treating as I’ve been unable to distort them by tightening the flanges down to the rear of the case. Anyone that’s used a case made with thin aluminum will know of what I speak. Tightening down the door flange when the door isn’t fully seated will bend the hell out of the flange. 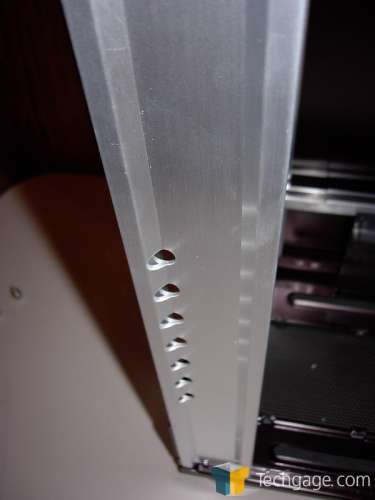 These are the rear braces for the case. They’re pretty unique in that they’re made from extruded aluminum rather than stamped aluminum. This adds a rather high level of rigidity to them and keeps the overall structural integrity of the case high. A really nice touch is that they’re drilled to allow you to swap in or out expansion cards without a need to back the mobo tray out past the end of the case. A nice touch that more than a few cases with motherboard trays are missing.