Moving around to the inside of the case we find that it’s nearly identical to the TJ09. The only real difference being the bracketry on the mid mounted fan. Looking to the rear we see a mesh panel under the PSU mounting location. 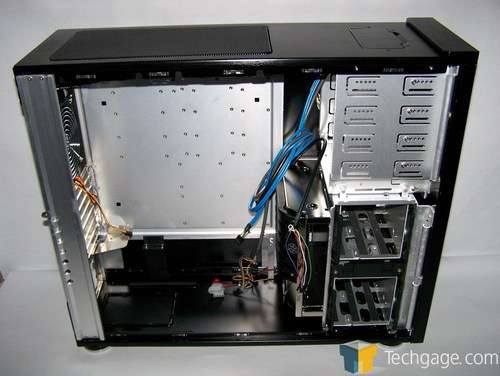 If you have a PSU with a single, large bottom mounted fan you can orient that fan down and draw cool air into the PSU rather than heated case air. Plus it’s a cleaner look than having the fan facing up. 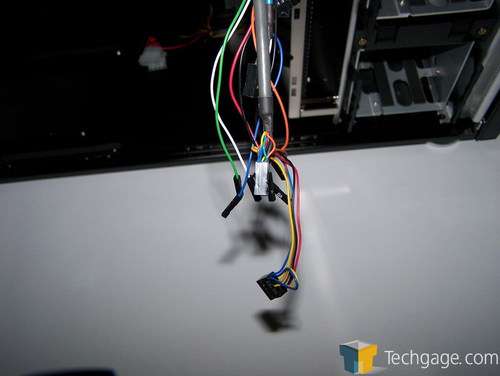 The cables are the same. All in one connectors for the USB, FP audio, which has both HD audio and ac’97 connectors and the dual purpose Firewire connectors. Personally, it won’t hurt my feelings to see the separate wires for the Firewire go the way of the dodo. I personally haven’t seen a motherboard that uses anything but the dual row connectors for Firewire since 2004. 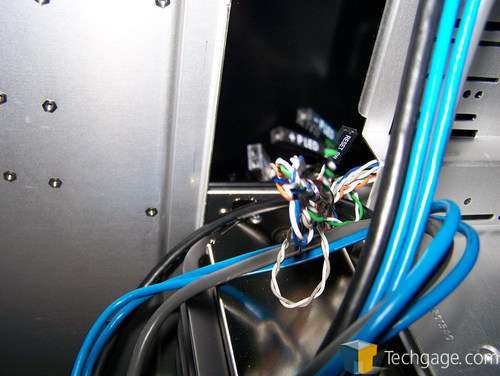 The power, reset and LED connectors run along the side of the external 3.5" cage which makes them easy to hide. 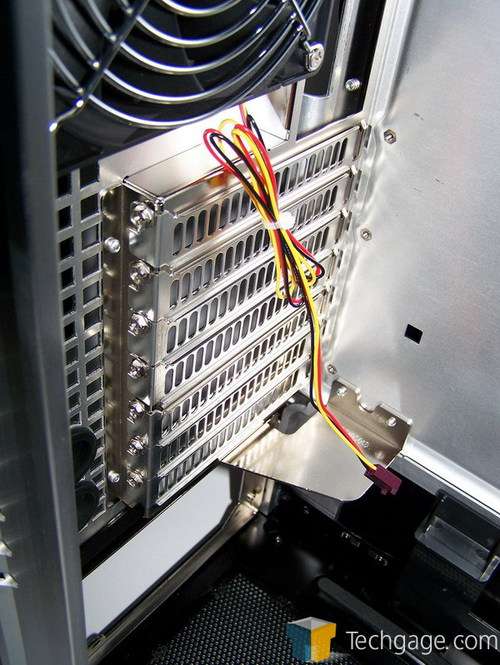 Let’s take a minute to ponder the ventilation of the TJ10. As I pointed out earlier the PCI slot covers are graced with goodly sized vents. The side of the mobo tray is punched to allow for good airflow there and there’s a low RPM (~1200RPM) 120mm fan on the rear of the mobo tray to act as exhaust. The fan is your typical three pin style and is easily compatible with any mobo fan header. 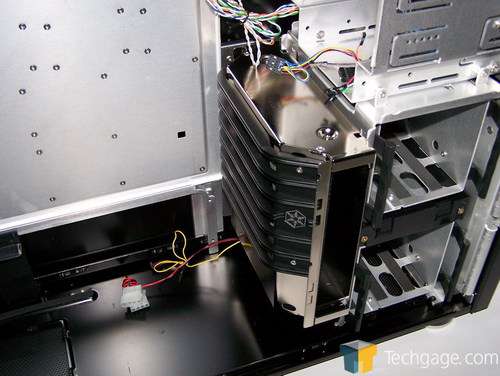 The mid fan housing has become home to a housing that allows longer than average PCI or PCI-e cards to have support on the end hanging past the edge of the motherboard. I can only say, it’d have to be one long ass card to need those supports since most cards that I’ve seen are only as long as a standard ATX mobo is wide if that long. 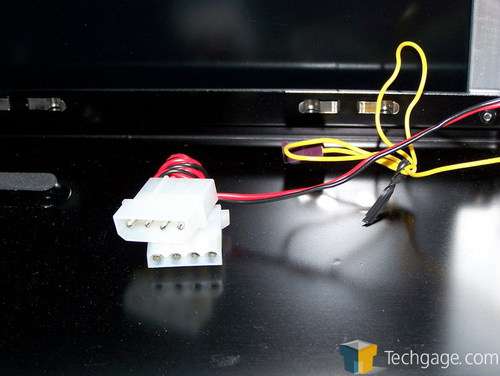 The front fan (Ok, mid fan) is a nearly identical 120mm fan with the same specs as the rear fan aside from the fact that it has a four pin power connector. It has an RPM monitor plug for hooking to a fan header on your motherboard. This begs the question, why not just put in another three pin fan? If it’s out of concern for the user not having enough fan headers (or one that’s too far away) then include a separate four pin to three pin adapter. This would make life easier for those of us that have enough fan headers or that want to use a fan controller to power our fans. 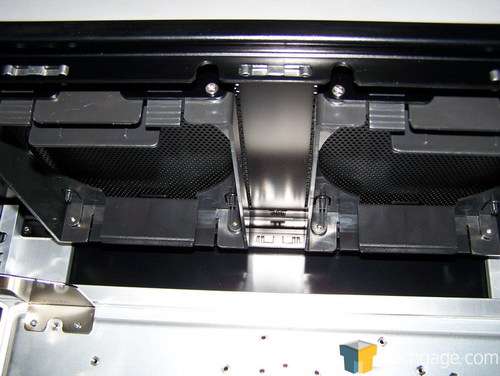 A look at the top of the case shows mounts for dual 120mm fans. Stock they’re not populated instead allowing you to "roll your own" by putting whichever 120mm X 25mm fans that suit your fancy into them. The fans are secured using a snap fit system. 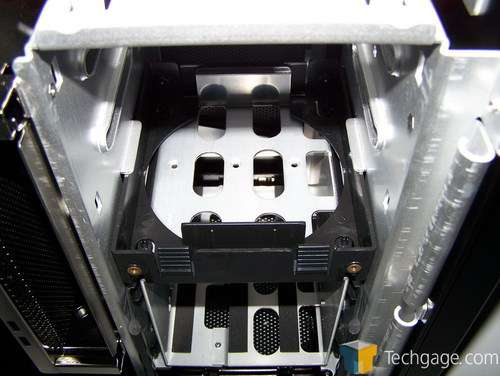 In between the HDD cages we have another mount for a 120mm fan. It’s literally the same bracket that’s used in the roof so the same applies here, 120mm X 25mm. You can either set the fan to blow up or down although I, personally, am fond of the fan blowing downwards. I think that with the way the side vents are shaped that with the fan blowing up you’ll end up with a pocket of warm air at the top of upper drive cage since it has nowhere to go. Looking through the lower fan cage we can see that there’s a mesh panel, the warm air can exit through that mesh. That’s why I opt for blowing the air down. 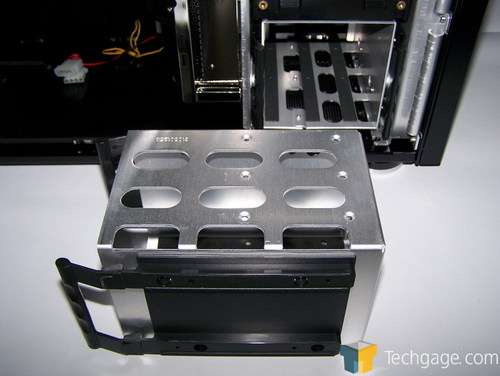 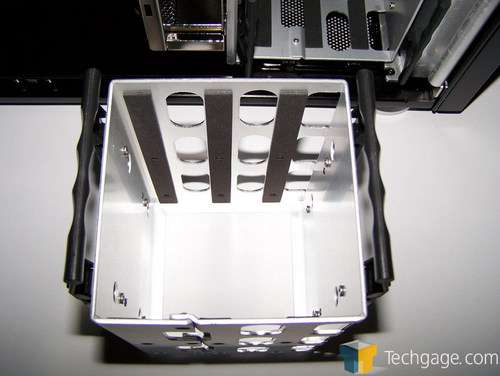 Looking at the HDD cages (since I brought them up) we see that they’re slotted to allow for decent airflow (although still not as good as a wide-open fan) and feature strips of rubber to help absorb vibrations from the drives. 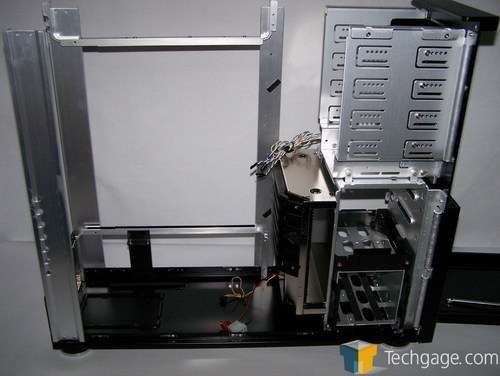 The wonderful thing about the TJ10 is that it’s nearly 100% modular. The whole case can be reduced to component parts with nothing more than a no. 2 Phillips bit screwdriver. The exceptions are the rails for the slide out mobo tray, that assembly is riveted together. 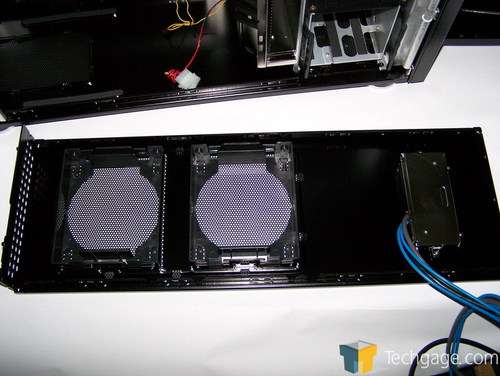 Once we have the top removed we get a better view of the inside where the rad is going to live. Yes, there’s plenty of room for a triple radiator. Since SilverStone has taken such an interest in water cooling I can only ask: Why not make the TJ10 a case designed for water cooling? Do away with the top mounted I/O ports, move them to the case front and make the case roof opening large enough to allow for a triple 120mm radiator. We have this new case front that’s over 1/2" deep which would allow for the I/O ports to be mounted across the front near the bottom or down either side edge. If they did that and made the entire roof top mesh you could easily fit a 4 X 120mm rad in the roof. 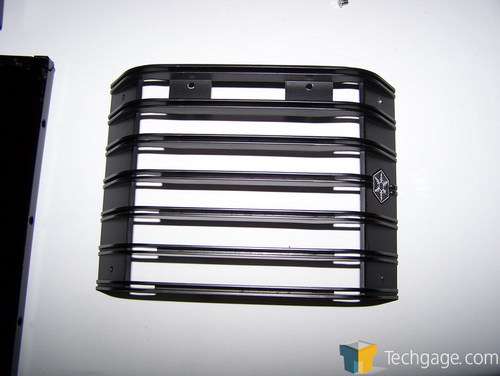 The bracket that holds the free ends of the monster PCI/PCI-e cards had to go! It’s pretty nice though, I was expecting some little flimsy garbage plastic affair but no, it’s cast metal. As you can see by all the screw holes, it is very secure when it’s mounted in place. 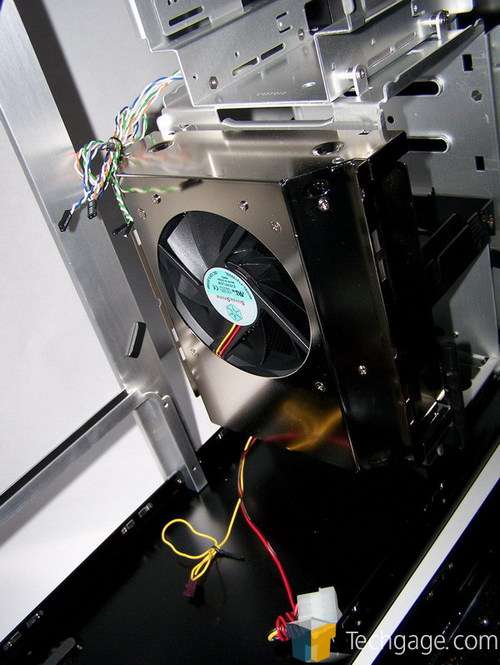 Sans the bracketry, the mid fan is identical to the one in the TJ09. I just wonder if SilverStone will adopt the bracket into the older case. 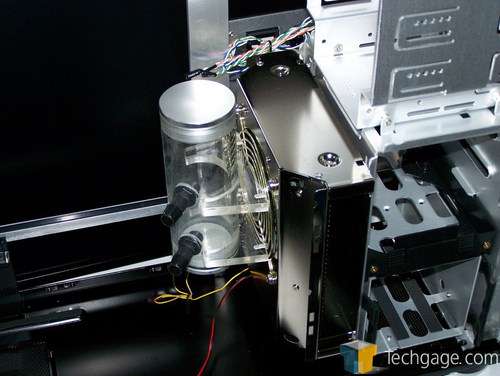 This is why I had to 86 the bracket on the mid fan, it’s where my reservoir is going to reside! In my last setup I had the res mounted inside the lower HDD drive bay which meant that I lost the capacity for 1/2 my HDD’s (not that I need it but some day I might) and with the new motherboards on the market offering a half dozen or more SATA ports I’d like to keep my options open. 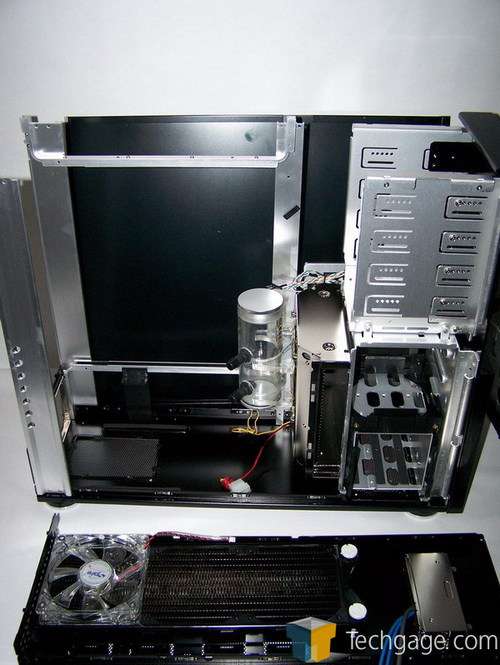 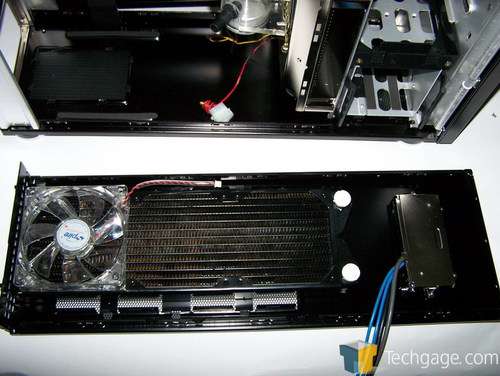 Here’s a look at the backbone of my cooling system, the Swiftech MCR320-QP. As we can see the rad overhangs the opening a bit on both ends but with the offset of the core it won’t be much of an issue. There’s about 3/4" of space between the rad and the ears for the stock fan holders. Plenty of room for the brackets I’m going to fab up. For more detail on them please refer to the forum post I linked to earlier. 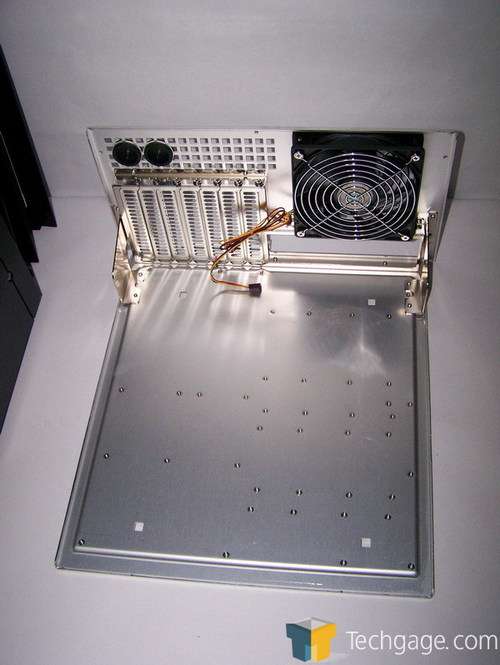 The mobo tray is capable of holding everything from a mATX to EATX. In a word, it’s freaking huge! Ok, that’s two words but let’s not argue semantics. 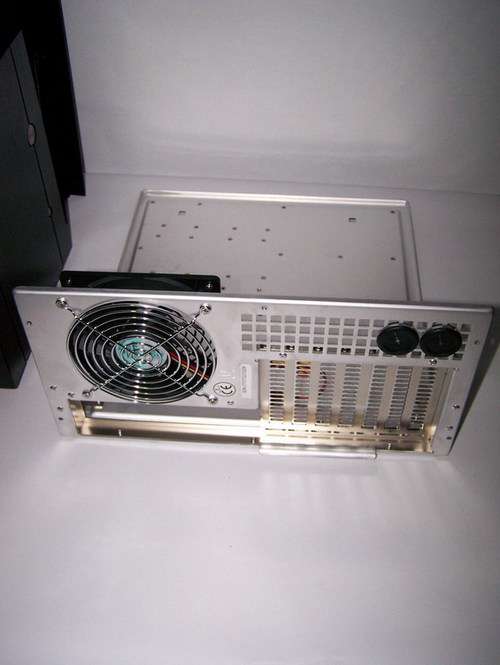 In a lot of cases that have removable mobo trays the weak spot invariably ends up being where the PCI slot covers mount. That area is aluminum and the holes for the screws tend to strip easily. 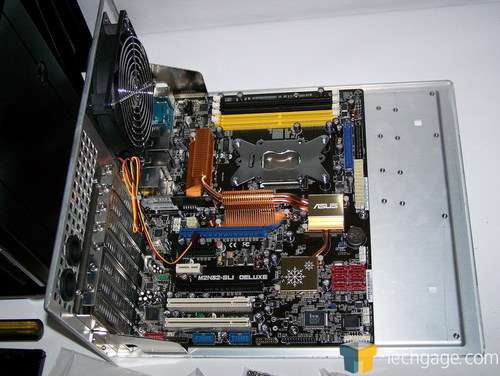 Wisely, Silverstone chose to make that portion of the mobo tray out of steel. Now, whether it’s plated steel or stainless remains to be seen but it’s still hardier than aluminum which means years of trouble free use.