Now, normally we’d be putting in performance numbers to outline how well the case performed but I’ll forgo that because I ran into some oddities. I tend to use a mixture of Speedfan and Core Temp to obtain my CPU core and case temps but for some reason, Core Temp is broken with the CPU I’m using.

Let’s list the load out since we’re talking about temps at idle and load.

As you can see I’ve managed to pull down a very respectable 40% over clock with a .12V increase in the Vcore. The ram has relaxed timings but it’s 100% stable at 5-5-5-15 whereas when I tried tightening it up it caused me to run into minor issues with certain programs. All told I’m at a loss as to why the temps are being reported like they are. 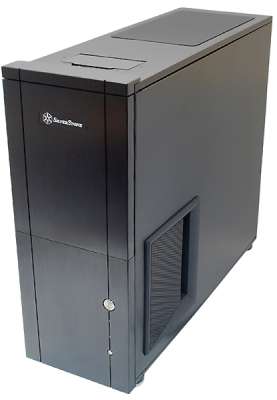 ASUS PC Probe claims the CPU’s hitting 44°C under load, Speedfan claims it’s hitting 61°C under load and Core Temp says the cores are at 17°C and 23°C under load. I dunno who to believe. I do know that the temps aren’t super hot because the GPU’s aren’t seeing any increase from the heat being dumped into the loop which is something I did encounter with my old system using the very same loop coupled with an MCR220QP and Black Ice Pro II X-Flow.

So let’s see how the SST-TJ10B rates:

All told the TJ10 is a joy to work with, the modular design is fantastic to the modders in the crowd and all the other touches make for a case that’s hard to beat. There are a few niggles but very few and they’re stuff that not everyone would consider to be drawbacks. All told I’m happy to award the TJ10 a 9/10 and our coveted Editor’s Choice Award.