Since this NUC is a bit unique with regard to available systems in our test lab, we don’t have any direct competition with which to compare the results (so far). As such, all results will be on their own for the time being.

The CPU has a turbo mode, taking the chip from 1.6GHz to 2.7GHz when needed. The 2.7GHz is for single-core only, while in multi-core workloads, the turbo drops to 2.5GHz. A problem arises in that the turbo can not be locked down and will float around, which adds inconsistency to the results. The turbo can be disabled in the EFI, but that is an unrealistic scenario. As such, we decided to keep the turbo enabled throughout testing and perform 4 passes per test instead of the usual 3 to confirm consistency. Throughout testing, the nominal turbo observed was typically 2.5GHz as most workloads were multi-threaded.

Another issue comes from thermals. For example, in 3DMark the core temperature is seen around the 60C mark for most runs, but during the physics tests, the temperature is seen soaring to a rather toasty 85C+ for a few seconds at a time. This led to some concerns over thermal throttling (despite there being a cutoff of 105C). As such, the fan was set to 100% during all tests to mitigate any clock variation in the turbo that may be the result of excessive temperatures.

The last bit of variation that can crop up is power related. The NUC has an intelligent power management system that’s configurable in the EFI. While we’re not talking overclocking here (there isn’t any outside of memory timings), there are a plethora of options related to power. Playing around with these options may result in a higher consistent turbo if the system is power starved. Details of this can be found in out NUC overclocking and overpowering guide.

We start off with some all-around system performance metrics with the help of SPECwpc. This is a suite of tests provided by industry standard applications to simulate real-world workloads, including Web browsing, document editing, archiving, 3D and image manipulation, and other miscellaneous activities. This takes into account the overall system and has tests that make use of both CPU and GPU at the same time, as well as testing of individual components such as RAM and storage.

Due to the weighting put on storage, the General Operations score is elevated quite a bit above the other tests, as the M.2 drive sports some very good IOPS. The particular drive is still a SATA based M.2 device, so it is somewhat limited, but even if you were to get a slow M.2 drive, overall system performance wouldn’t be affected that much.

From now on, we have decided to make use of the OpenCL benchmarks within PCMark, as most industry standard applications leverage some kind of accelerated processing (i.e. making use of the GPU), this includes Web browsers such as Chrome, Firefox and Internet Explorer, as well as productivity and creative suites. As such this provides a more realistic workload.

SANDRA is a rather complex set of benchmarks and can take a very long time to complete, but offers some incredibly granular results for each individual subsystem. Below is just a tiny amount of the overall selected tests, but covers some of the important metrics, such a hashing, bandwidth, shader speed and system latency.

During SANDRA and the wide variety of tests performed, we thought we’d take a look at some of the thermal issues outlined. Initially, tests were performed with the fan set to auto in the EFI, this was done twice with reboots in-between to confirm results. The second two tests were performed with the fan set to 100%. There was not a huge difference overall, 1-2% or less, but it was consistent overall. In all honesty, this could just be natural variation in the second set of runs since the increase is so small, so it’s hardly worth the extra noise from the fan.

The NUC isn’t really meant for gaming. While Intel’s integrated GPUs have improved massively over the years, it still lags behind offerings from both AMD and NVIDIA. This particular i5-5250U comes with an HD 6000 GPU, and since it’s limited to a 15W TDP, doesn’t come with the new generation Intel Iris graphics.

We’re going to point out now that we’ve decided to drop Ice Storm from our usual round-up for a couple of reasons. First, it’s too easy to render. While the benchmark provides a good means of testing low-end tablets that are a couple of years old, modern low-end systems can render the scenes in excess of 250 FPS. Due to such ridiculous render speeds, any small variation in the system can cause huge metric swings. When originally tested, this NUC was producing Ice Storm results in the 56K range, then after a system update, was down to 46K, disable wireless, 51K. The scores are all over the place with simple changes made, while all other scores (Cloud Gate and above) remain the same.

We ran the Fire Strike Extreme test just for fun, with some very predictable results. While the CPU proves to be strong during the physics elements, the GPU really struggles with any kind of mid-range gaming over 720p. However, 3DMark did show us some rather interesting results when it comes to throttling. While I had suspicions that high GPU workloads were causing the CPU to lower its clock, the amount was quite surprising.

Follow the purple line and you can see the CPU is scaling all the way back to under 1GHz (800MHz to be precise) and spikes up and down frequently, barely going over 2GHz. Looking at the physics test and the CPU operates at its full 2.5GHz turbo. Following the temperature at around 60-70C, it’s not thermally bound, so there is a clear power limit on the processor.

While overclocking is not strictly available, there are other ways to improve the system. In an upcoming article (now live), we’ll take a closer look at the effects of overpowering the NUC through the EFI.

A nice and simple benchmark for 3D rendering on the CPU.

Maxon’s Cinebench has been a mainstay of benchmarking for a long time. Providing both CPU rendering, and now OpenGL GPU based rendering.

Part of our real-world benchmarks, we have some video encoding. Taking a 1080p M2TS Blu-Ray rip of a concert and converting it down to 720p using H.264. This is the first 10 minutes of the concert and encodes typically range within 10 seconds of each other.

Although large music collections are becoming rarer due to streaming services, encoding music to different formats is still important, especially if you plan to stream over networks with devices that do not support various formats natively.

There are two benchmarks available from Unigine that cater to two different workloads. Heaven is the most common and probably memorable as it was the first benchmark to really showcase what tessellation could do, from cobbled paths to detailed dragon spines and scales. Valley is the open-world simulation, guiding you through forests, hills, mountains and shrubs, taking advantage of very long draw distances, as well as Level of Detail texture swapping.

Yup, pretty much no 1080p gaming on this poor little NUC. Even with AA disabled, no Tessellation, medium textures and running at 720p, you’ll be lucky to get 25-30 FPS.

While we mention with 3DMark that games are not at the forefront of the NUC5i5RYK, a couple have been included for future reference. These tests are performed differently compared to our usual graphics benchmarks, simply because the games with our usual settings will be completely unplayable. As such, we will be using more realistic settings that will provide a better target for low-end systems, such as those with integrated graphics or entry-level discrete GPUs. Some of these settings may not be completely playable with all systems, such as this NUC. 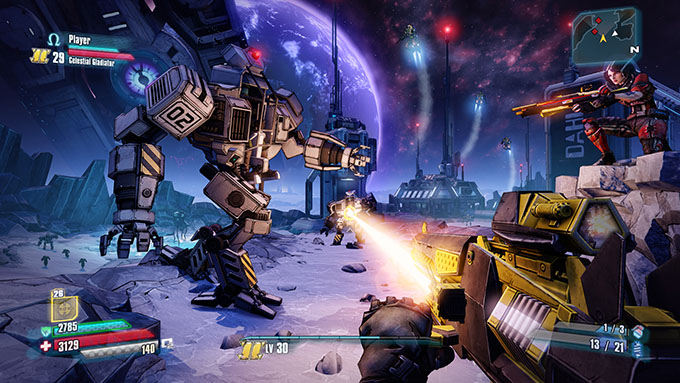 Where would we be without cell-shaded graphics, a billion guns and Torgue? Bouncing all over the moon without a care in the world, the nostalgia of low gravity and double-jumps. The Borderlands series brought some refreshing graphics and its own universe of humor, and injected it into the rather stagnant and dull First Person Shooter genre. The Pre-Sequel wasn’t quite what everyone was after, but it was still enjoyable.

With pretty much all the settings cranked up to full, it surprising to see the little NUC is capable of pushing more than 10 FPS at 1080p. Obviously, this isn’t remotely playable, but at 22 FPS in 720p, it’s quite possible. If you are prepared to drop some of the settings further, it’s possible to get 30 FPS out of the NUC.

The Witcher series is an RPG player’s dream. Sprawling open landscapes, rich and deep story, moral choices abound, and a healthy dose of mythology, politics and cut-throat combat. You can read our review of the latest Witcher game to see what you’re missing. The last two titles have been pinups for graphical achievement, boasting some of the most beautiful environments you’ll come across. Needless to say, it’s not a title we expect to render well on integrated graphics.

These settings were put in place as a result of testing out an acceptable visual quality, but still low enough to be at least somewhat achievable with a low-end dedicated GPU. Despite the fact that some textures were set to high, the impact on performance was almost negligible. The big hitter would have to be SSAO, but turning that off results in a visually underwhelming game. 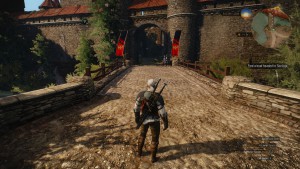 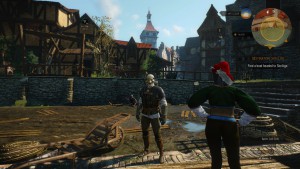 Even at low resolution, The Witcher 3 is impressive to look at, just a shame about the low framerate.

At 10 FPS, it’s pretty much unplayable, but for those interested, dropping all settings as low as they will go with the resolution set to 720p, the absolute best framerate you can expect is just 20 FPS, typically averaging around 15-18. Perhaps an Iris Pro GPU would allow The Witcher 3 to be at least somewhat playable.

Hong Kong’s answer to Grand Theft Auto, Sleeping Dogs can be Wei too much fun, from simple driving around, getting into fights with the local gangs; all working as an undercover officer. The best part of it? I get to drive on the proper side of the road! Sleeping Dogs may be getting a little old now, but it still proves to be a challenge due to its spectacular graphics and city landscape.

Turning back the graphics settings a bit and you can get 20-25 FPS. Due to the amount of driving in the game, a higher FPS is generally better, as 25 frames would get you into trouble quite frequently around sharp turns.

Page List:
Top
1. The NUC5i5RYK, Introduction and Details
2. Testing, Benchmarks and Games
3. Living and Working with the System