SteelSeries unleashed its Sensei in 2011; one year later, the revamped Sensei [RAW] joins its ever-growing gamer-oriented line. Join us as we see whether or not the newest model’s “less is more” approach is enough to merit its celebrated predecessor’s status as one of the acknowledged masters of the gaming mouse class.

Sometimes, it’s quite wonderful to have everything you think you might need available right at your fingertips. That seemingly was SteelSeries’ rationale when it released the mighty Sensei gaming mouse last year (read Rob’s review here in case you missed it).

With its ambidextrous physical design, a top-notch laser sensor, a 32-bit ARM onboard processor, onboard memory for storing mouse user profile settings on the mouse itself, and bling items such as the ability to change the mouse’s LED colors, a white-on-black LCD on its underside, and a shiny metallic-like finish, what more could you possibly ask for? That’s a lot of extras to go with your rib-eye, certainly.

Having so much sizzle with the steak, though, costs. For most people, ~$90.00 for a mouse is a bit rich, no matter how well-equipped. SteelSeries understands this, and smartly has seen fit to release a slightly revamped variant of the venerable Sensei. 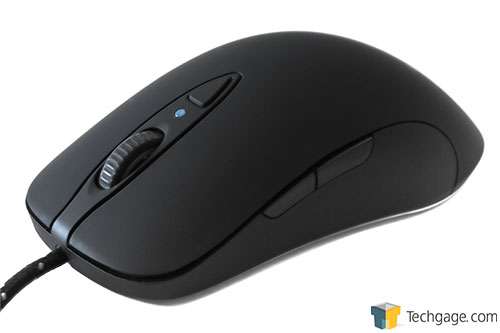 On first blush, the Sensei [RAW] doesn’t appear to be all that different compared to the all-singing-and-dancing original. The most obvious visual difference is the finish. The [RAW] is available in either a glossy black surface finish or a dark gray rubberized finish. Personally, I would prefer the rubberized finish, simply because shiny surfaces have a nasty tendency to show fingerprints and other blemishes. I also tend to prefer more austere aesthetics, so I’m very happy that SteelSeries saw fit to send Techgage one of its rubberized models. 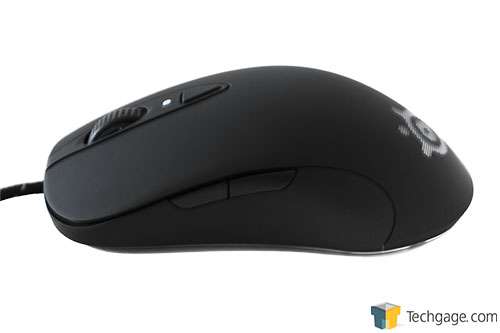 Like the original, the [RAW] is an ambidextrous mouse. Consequently, it looks identical whether you’re viewing it from the left or the right. The profile view shows the two side buttons. By default, the [RAW] is set up as a right-handed mouse, which means that the left-side buttons are configured like most other right-handed mice: The front button actuates the Page Forward command, and the rear button executes Page Backward. 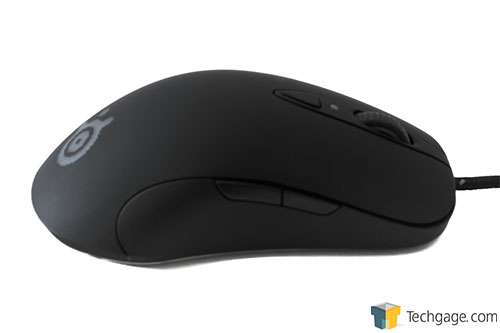 The mouse has seven buttons, plus one dedicated CPI toggle switch. There are, of course, the left-click and right-click buttons; a pair of buttons on each side; and the scroll wheel button. Speaking of the scroll wheel, it features gradients all along its rotational travel, which gives using the wheel a very satisfying tactile feel. The CPI toggle button is situated just behind the scroll wheel, far enough so that it takes a conscious effort to change CPI settings (instead of, say, hitting it accidentally). 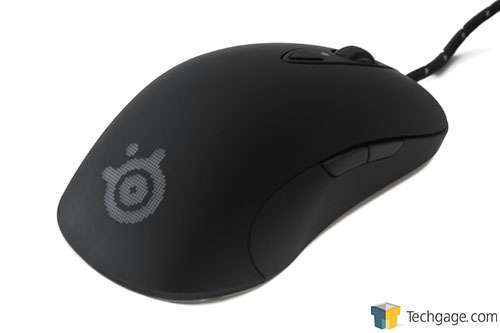 Now looking at the mouse’s underside, we don’t find the original Sensei’s LCD screen. Instead, there is a frosted translucent plastic floor through which you can see the [RAW]’s electronic guts, as well as three feet. Just a few millimeters aft of the mouse’s dead center is the laser sensor emitter. 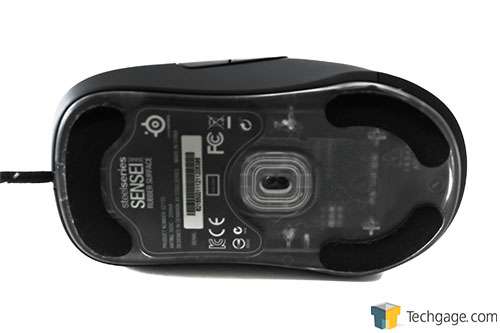 Flipping the [RAW] right side up again, can see that the mouse does allow one small concession to bling: The SteelSeries logo at the mouse’s rear does have a white LED behind it which lights up when the mouse is plugged in and powered on. The white LED matches two other LEDs on the mouse, which are mounted in the scroll wheel as well as just in front of the CPI button. Unlike the original Sensei, you cannot change the color of the LED. By default, the SteelSeries logo LED lights up and darkens in a breathing effect, but you can change the LED’s behavior if you install the SteelSeries Engine software.