SteelSeries unleashed its Sensei in 2011; one year later, the revamped Sensei [RAW] joins its ever-growing gamer-oriented line. Join us as we see whether or not the newest model’s “less is more” approach is enough to merit its celebrated predecessor’s status as one of the acknowledged masters of the gaming mouse class.

I’ll mince no more words and just say things as simply as I can: The Sensei [RAW] is now my favorite mouse. This baby is a keeper.

Choosing a favorite mouse is all about personal preference. It’s very rare when a mouse won’t do what it’s supposed to do, so how and why a mouse becomes a personal favorite is all about how it goes about doing its job.

Ergonomics is a gigantic consideration, for one. Over the past few years I’ve gotten used to asymmetric, right-handed mice. In fact, all of the mice I’ve owned are strictly for right-handers. Muscle memory conditioned me to assume that having my right thumb sit higher than the outside of my palm was the best way for me. A few short minutes after I first plugged in the Sensei [RAW], all that muscle memory disappeared. What’s left instead is a feeling that is best expressed by the following simple sentence: “This feels so right.”

It’s difficult to articulate how moving from an asymmetric, biased mouse design to a symmetrical ambidextrous one can lead me to such a definitive conclusion. The difference in basic layout (right-handed vs. ambidextrous) is certainly radical, but I think the critical details are not in the layout so much as they are in the execution of the details.

For one thing, the balanced design allied to the size of my hand means that every button, even the right-side buttons, is very easy to reach. I don’t have to shift my grip at all for either my ring finger or my pinky to hit either of them. Maybe it’s simply serendipitous that my hand fits the [RAW] so well, but in my opinion most hand sizes would be accommodated just as well (unless, of course, your hands are as big as Optimus Prime’s).

Speaking of the buttons, the [RAW]’s are probably the most satisfying to use of any mouse I’ve ever tried. Click action is very positive, the travel distance just perfect. Nothing feels chintzy or cheap on the Sensei [RAW]. In the time I’ve spent with this mouse I’ve never had to re-click any of the buttons, nor have I had any accidental clicks. With almost all of my previous mice, I’d either accidentally press one of the buttons or would have to press again to get it to do what I want it to do. 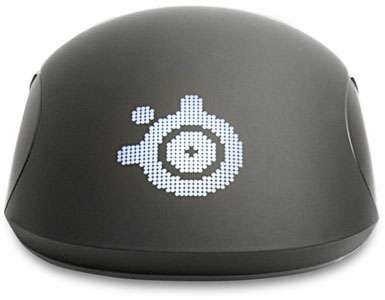 The rubberized surface treatment is also super-comfortable to touch. The texture is not exactly smooth, nor is it too coarse. I can’t compare it with either the original Sensei or the glossy black variant of the [RAW], but the rubberized variant feels like it was made for my hand.

Moving the mouse is also a treat. No matter the surface it’s on, whether it’s a padded mouse pad or a super-rigid one, or even if it’s just the top of my desk, the [RAW] just glides smoothly.

Rob said in his review of the original Sensei that the mouse didn’t make him a better gamer. I don’t game online or competitively, but what I would say is that the [RAW] feels like a natural extension of yourself. Using it in FPS games is intuitive; you never have to hunt and peck for the correct button to execute the appropriate actions in-game. I strongly agree with Rob’s take that while it may not make you a better gamer per se, it makes gaming more enjoyable. 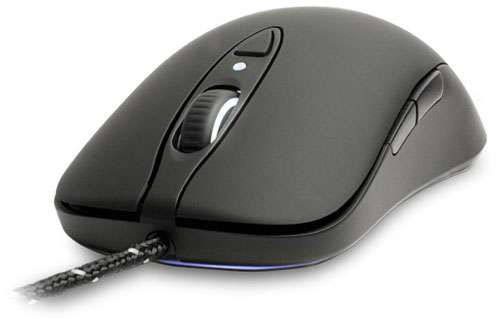 In terms of aesthetics, I’m totally sold. The design is balanced, symmetrical, essentially simple. Not even the big, LED-lit SteelSeries on the [RAW]’s rump doesn’t do anything to detract from its elegance. The austere matte-gray finish, so different from the comparatively garish shiny metallic color scheme of the original Sensei, is the perfect cherry on what is already great aesthetic cake.

Albert Einstein once said, “Any intelligent fool can make things bigger, more complex, and more violent. It takes a touch of genius – and a lot of courage – to move in the opposite direction.” It seems SteelSeries took heed: it took what was already a celebrated, highly-rated product and improved it not by adding even more features, buttons, or capabilities, but by distilling all that was great about the original Sensei and then wrapping it all in a far more elegant package. Where the original Sensei tried to wow and overwhelm you with everything it could do – even all those things that you would probably never use or need, but still paid for anyway – the [RAW] instead just delivers on everything you do need. There are still a few concessions to bling (particularly on the glossy black variant), but you now have the choice to wear the classy dark suit if that was your preference.

By keeping things pure, simple, and elegant, SteelSeries now has the ultimate Sensei in the [RAW], especially when you consider that at $59.99, it’s a good bit more affordable than the original Sensei’s $89.99 asking price.