No more than two years ago, having 1GB installed in your gaming rig was plenty. The thought of having 2GB, at the time, was something that would make enthusiasts float in a state of euphoria. All that available memory was a glorious thing. It wasn’t until late 2005 that the need for 2GB was really starting to be seen, with titles such as FEAR and Quake IV. Fact is, if you want to play the latest games at high resolutions, you will want to throw in a healthy supply of RAM.

This is not to say that gamers are the only ones who would benefit from more ram though, as multi-taskers are the ones who would quicker see the benefits. Imagine re-encoding an HD video while playing the latest game at a high-resolution. 2GB might lag, while 4GB will help things run smooth as butter. Adding more CPU cores to your rig helps, but it won’t speed processes up if they are choking on the lack of ram installed.

Do you need 4GB of ram? That’s a question you should already know. If you are using your computer and it lags often while multi-tasking, having 4GB might be a wise idea. It all depends on what you are doing and where the bottlenecks are. As it stands right now, Vista users will be the ones to see the greatest gains from moving to 4GB of ram. Vista is a power hungry OS that loves to eat memory, so adding large processes on top of the OS itself, it will cry for even more. At this point in time, even the largest games on the market at the highest resolutions won’t require 4GB of ram, but things may be different by the end of the year.

Reasons for more memory aside, this is our first review for a 4GB kit. It will certainly not be our last though, as we are undoubtedly moving towards 4GB as a norm. That time will be here before we know it…

When Super Talent released their first performance kit early last year, they used a standard clamshell packaging which wasn’t too appealing to those pondering a purchase. Shortly afterwards, they moved up to this blister pack type packaging, which is certainly memory market-standard. It keeps the modules secure during shipment and that’s all that matters. 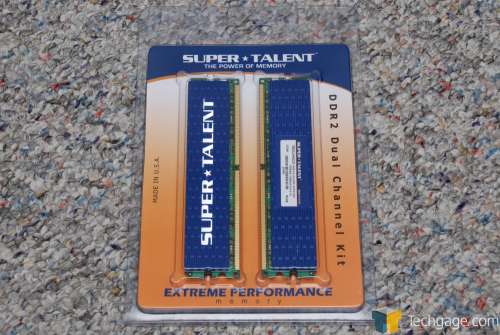 The heatspreaders leave a bit to be desired though. To me it looks like a spreader doused with a bunch of candy sprinkles and then painted over. Once again though, they do their job. I am unsure how this method would compare to others, but it’s better than some I’ve come across. 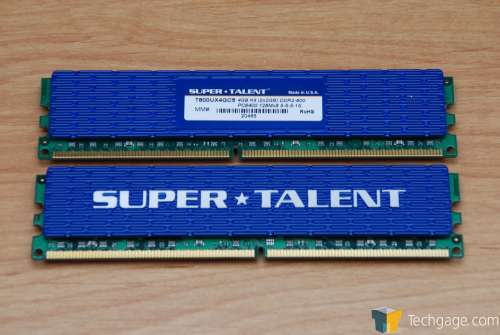 The sticker pasted on each module gives all of the information any user should need. I actually wish more companies would take after Super Talent, because most don’t include timings at all, much less the tRAS value. The only thing better would be to include the required voltages as well. 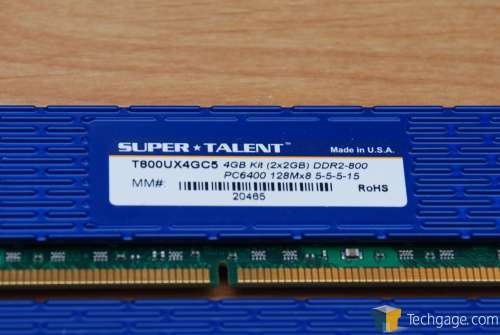 Overall I can’t say I dislike the presentation of the modules or the modules themselves. What I do care about is overclocking, which we will discuss on the next page.