It’s not too often that we take a simple flash drive for a spin, but with the advent of USB 3.0 models, things have become interesting. With USB 2.0, we were throttled by a limited bus, and while theoretically we might see performance of up to 37MB/s, the most common top-end speeds we see in real-world tests hovers more towards 30 – 34MB/s. We’ve long ago hit a point where the flash chips are not the bottleneck, but rather the USB bus.

When I first learned of USB 3.0 at Intel’s 2008 developer forum, the promise was of speeds up to 10x, and at that time, there were real-world demos that proved it. Now that the standard has been officially launched, and products are purchasable, you too can enjoy such ridiculous speeds… speeds that literally match or surpass that of your hard drive or solid-state disk.

At Computex 2010, a lot of talk had to do with this very thing, USB 3.0. Gigabyte even had a separate room at Taipei 101 dedicated to vendors of USB 3.0 products that wanted to show off their wares. There were at least ten companies there, showing off everything from thumb drives to external enclosures to external hard drives / SSD’s. USB 3.0 is here, and it’s exciting. 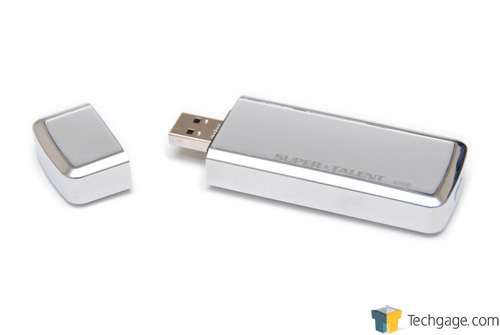 As we feel that USB 3.0 is able to offer consumers major gains for common uses, you can expect to see a lot of related content going forward. To kick things off, we’re taking a look at one of Super Talent’s thumb drives, the 32GB SuperCrypt. This drive is much more than a thumb drive upgraded from USB 2.0 to 3.0, as it features a JMicron JM612 SATA controller, which includes support for fast cache, and also Symwave’s USB 3.0 bridge chip – one that’s going to be a familiar sight in current USB 3.0 storage devices.

Super Talent’s SuperCrypt drive looks no different than most other USB thumb drives, and if someone completely oblivious to USB 3.0 takes a look at it, they’re still going to recognize the familiar USB interface. Because of the extra chips in this drive, though, and the faster SSD-quality memory IC’s, this drive is a bit thicker than others. Unfortunately I didn’t think to take a comparison shot, but the width and height is close to four regular-sized stacked (think OCZ Rally) drives in a 2×2 configuration. It’s a larger drive, but as you can tell in relation to the USB connector, it’s far from being “large”.

The package you receive with the drive is simple… it’s simply a box with foam inside to protect the drive, and that’s pretty-well it. It’s simple, but it doesn’t need to be anything but. The “SuperCrypt” portion of this drive has to do with its built-in encryption, which I’ll touch a bit on later.

Currently, Super Talent offers three different USB 3.0 thumb drive models. For sheer speed, there’s the RAIDDrive series, which boasts speeds of over 300MB/s. The SuperCrypt series, which we are looking at here, is a bit slower at 240MB/s but includes strong encryption. On the affordable side of things, there’s the Express Drive, which looks no different in size and form-factor to a 2.0 drive, but features speeds of up to 125MB/s – still far, far beyond a typical 2.0 drive.