While USB 3.0 is capable of delivering some insane speeds, this is just an external storage review, so I won’t get too deep into our testing methodologies. If you’ve read our other performance articles, you’re likely already aware of how seriously we take our testing practices, and the steps we take to assure the most accurate results possible.

For our real-world transfer tests, the source files are stored on Intel’s X25-M G1 solid-state disk, which avails us a top-end read speed of around 250MB/s. Unless the USB 3.0 device we’re testing with is able to write in excess of that, there should be no bottleneck.

Because we’re planning on taking a look at many more USB 3.0 devices in the future, we’re using this first review as a way of understanding which tests we should be conducting, and whether or not we’re going to hit a point where our testing is a little excessive. These are only external storage devices, but because USB 3.0 allows such fast throughout, the drives will be far more feature-rich and more capable than the USB 2.0 drives we’ve been used to. If you have suggestions for our methodologies or which tests we should be using, please speak up in our related forum thread.

To help kick things off, we are using Iometer, a popular storage benchmarking application that’s effective, and also very customizable. It’s for both of those reasons that we choose to use it, and also the fact that the program outputs to both MB/s and IOPS (in/out operations per second), which is a popular standard for measuring storage devices in enterprise environments. Running such a tool on USB 2.0 drives would have been a bit silly, but because many USB 3.0 storage devices include higher-quality NAND flash, it’s a good fit. 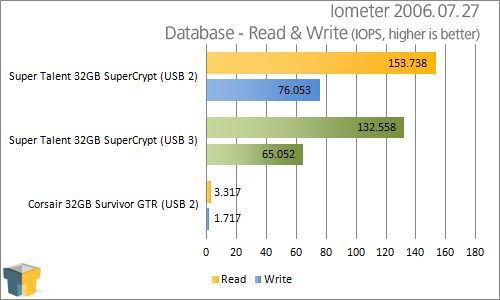 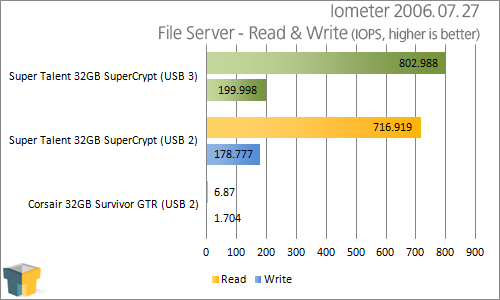 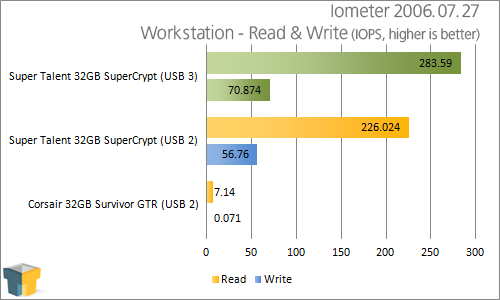 The performance is quite impressive here so far, especially in comparison to Corsair’s highest-end USB 2.0 drive. Even when using Super Talent’s drive in USB 2.0 mode, the performance is incredible due to the higher-end chips, so in actuality, if companies had been using such chips even in USB 2 drives, things like installed operating systems should have been much quicker to respond.

Why did the USB 2 mode fare better in the Database test? Hard to say. It could have been system variances, or drive variances. Benchmarking the drive over and over tends to introduce varying results as well, so it’s hard to say that the drive does indeed perform better with the Database test with USB 2.0 mode, and it would seem strange to believe that that could be the case.

One of the simplest methods for testing storage is with HD Tune, and as it’s able to give reliable and repeatable results, we like to use it in our testing. Although the program offers a good range of testing methods, we use the basic test that gives us read speeds and also access latencies. 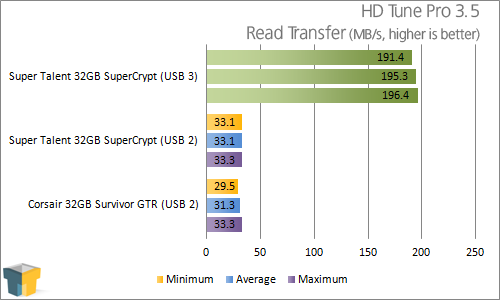 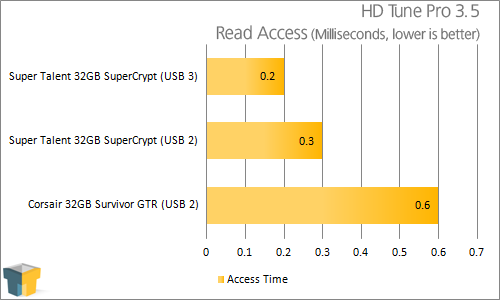 The SuperCrypt continues to deliver some sweet results here. We’re not quite seeing the 240MB/s prospective speeds here, but as we’re close to 200MB/s, it’s quite impressive. Even with the same drive under USB 2.0 mode, the speeds are severely diminished, and top out at 33.3MB/s, which is likely the top-end speed we’d ever see if Corsair’s high-end 2.0 drive is anything to go by. 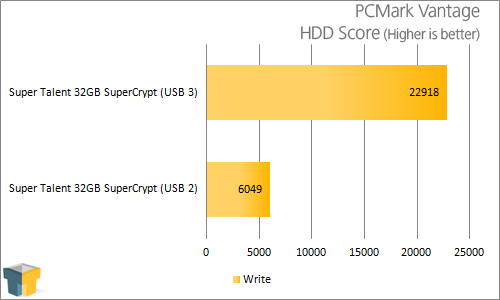 Unfortunately, due to somehow forgetting, I didn’t get results from Corsair’s drive with this test, so I had to omit it. Between the same drive in USB 2.0 and 3.0 mode, the differences are stark.