Over the past year, many storage companies have been jumping on the CrystalDiskMark bandwagon to help strut their drive’s performance as best as possible. It’s easy to understand why, too, since this benchmark gives results that are far higher than others, and in some regards, it could be considered unrealistic given that in real-world tests and other synthetic benchmarks, the results never equal up. We include it for the sake of interest and because it is still a very thorough benchmark. 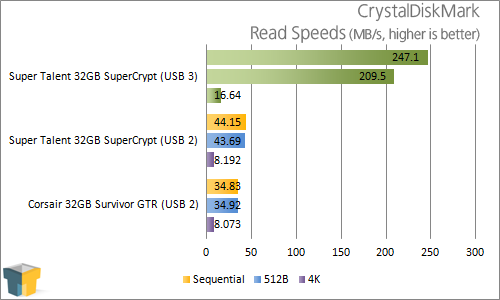 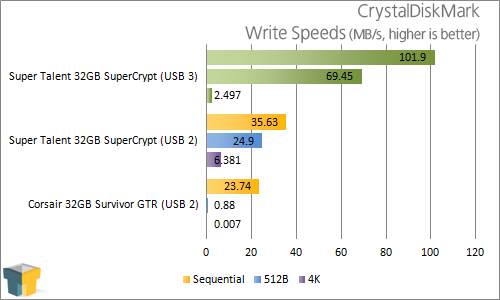 Of all the tests we ran on Super Talent’s drive, this is one of two that supports the company’s 240MB/s rating. In fact, it came even closer to 250MB/s. On the write side, we saw the drive break just the 100MB/s mark. For the record, that write speed is equaled to or surpasses most mechanical hard drives.

CrystalDiskMark does well to show the absolute top-end value of a storage device, but ATTO comes close as well. Its test can test a wide-range of cluster sizes, for both read and write, but we only note 4KB, 64KB and 1024KB of the former. 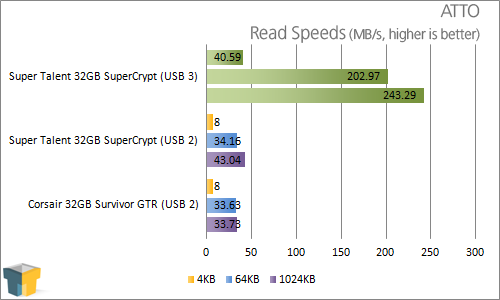 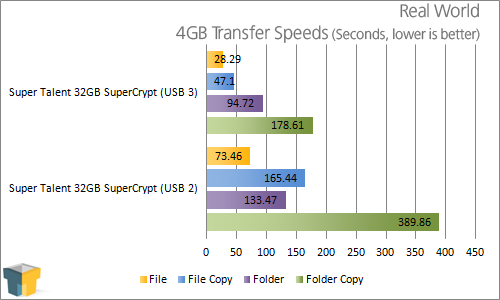 It’s clear that in the real-world, the differences between USB 2.0 and 3.0 are not near as stark as with synthetic tests, but the differences are still rather large, especially with our single large file tests. USB 2.0 transfer to the same drive took about 3x as long to transfer a 4GB file! 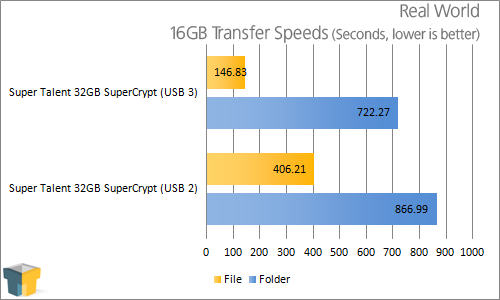 USB 3.0 is still highly favored where a 16GB file or folder is concerned, although the endurance of copying thousands of files within our 16GB folder diminished some of the gain we’d hope to see. If you’re dealing with large solid files, the transfers are incredibly faster compared to USB 2.0. 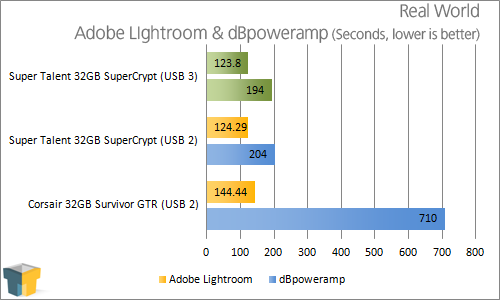 There isn’t a large difference here between USB 2.0 and 3.0 for the Super Talent drive, but as these processes are a bit more processor-bound than storage-bound, it was to be expected. Converting music on a standard USB 2.0 thumb drive proved quite painful on the Corsair drive, though.